Learn the key differences between these two opposite exercises. 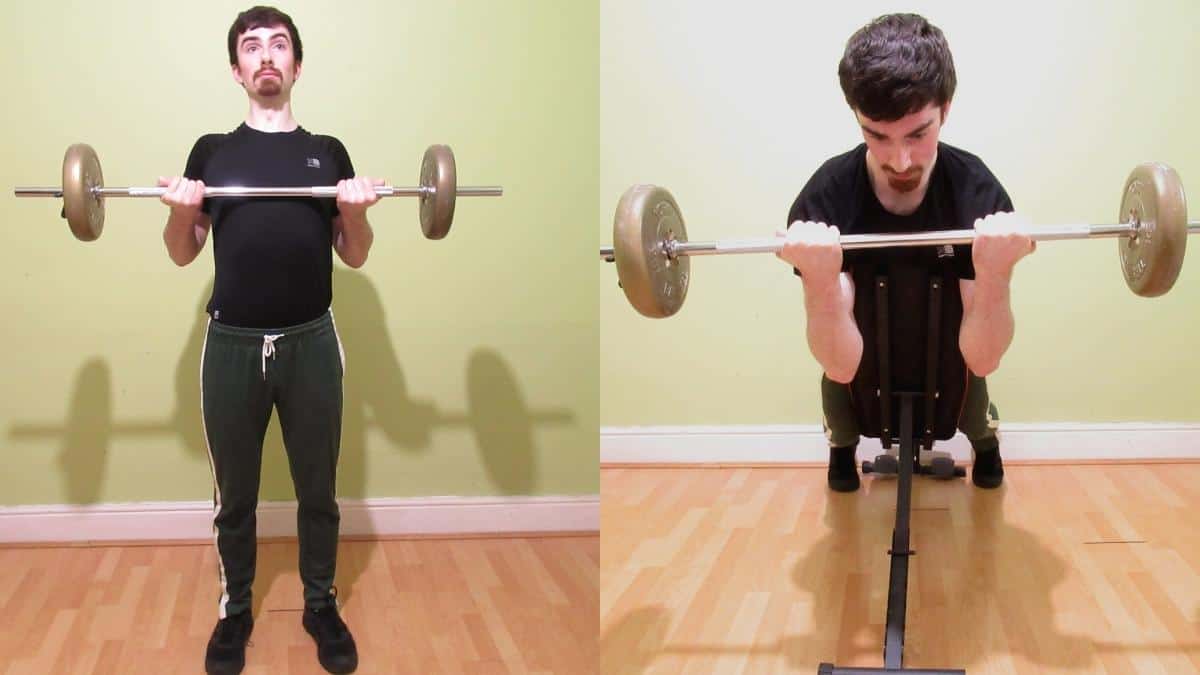 Both the bicep drag curl and the spider curl have a proven track record for increasing bicep size and strength. But which is better for bicep development? And should you do both exercises?

This detailed drag curl vs spider curl debate compares these two movements over three main categories—biomechanics, muscle growth, and strength gains—to help you decide which one is right for your arm training ambitions.

Table of Contents show
What are the differences in muscle activation?
Which is better for muscle growth?
Which is best for strength gains?
Which is more convenient?
Should you perform both exercises?
Which one should you do first?
Drag curl vs spider curl: The verdict

What are the differences in muscle activation?

Both exercises primarily work the biceps brachii in addition to the brachialis and forearm flexors. Spider curls emphasize the short (inner) head of the biceps to a higher degree because they have you curl with your arms in front of your body. They also provide a more intense peak contraction.

Drag curls, on the other hand, are an excellent spider curl substitute and work the short head as well. However, they also emphasize the long head more effectively because you have to drag your elbows behind your body as you lift the weight, which shifts more of the tension onto the outer muscle fibers of the biceps. As such, drag curls are very effective for building those peaks that make your biceps look taller and more impressive when flexed.

Which is better for muscle growth?

Muscle growth mainly comes down to performing sufficient training volume and then maximizing the muscle stimulation that you generate in the gym with a healthy, high-protein and diet and good recovery.

However, spider curls enable you to lift heavier than drag curls, which means that you can overload your biceps with more resistance and stimulate more significant hypertrophy.

Conversely, you have to lift lighter weights on spider curls. The trade-off is that they provide better bicep isolation (presuming good form) than drag curls. This is because some lifters cheat the bar up during drag curls by shrugging it up with their traps, which takes the tension off the biceps.

That said, if you perform drag curls with good form, then it's likely that you'll achieve more muscle growth from doing them instead of spider curls, which are much better suited as a finishing movement in my book.

Which is best for strength gains?

As mentioned, drag curls let you lift heavier weights than spider curls. This is because the latter exercise trains your biceps in their weakest position, which is to say when they're maximally contracted.

Drag curls also get progressively harder as you drag the weight up your body. However, they provide more consistent resistance than spider curls and have a less intense peak contraction.

All that said, your equipment choice is by far the most significant determinant of your strength gaining potential. Specifically, you want to use barbells as opposed to dumbbells if your goal is to gain strength because you can increase barbell resistance in much more manageable increments.

With dumbbells, on the other hand, you typically have to make 5lb weight jumps at a minimum, which is easier said than done for a relatively small and weak muscle group like the biceps.

Which is more convenient?

The dumbbell bicep drag curl is more convenient because you don't need a weight bench. As such, they're much more practical to perform at home or in a busy commercial gym when a lot of the equipment is taken.

Should you perform both exercises?

While you can progress just fine by choosing one exercise, you can also perform both movements to hit your biceps from different angles and potentially recruit a wider variety of muscle fibers.

Note, however, that you don't necessarily have to do both drills within the same workout. You can split them up over the week so that you can get in more quality training volume.

Which one should you do first?

It's recommended to start with drag curls because they enable you to overload your biceps with more resistance. Spider curls, on the other hand, make a great finishing exercise because they emphasize the contracted part of the lifting motion, which produces a really intense bicep pump.

You can also click the link to learn the difference between a spider curl and a preacher curl since these two exercises often use the same equipment.

Drag curls are an old-school bodybuilding exercise that enables you to overload your biceps with plenty of resistance. Yet, at the same time, drag curls also provide fantastic muscle isolation because it's really hard to cheat the weight up when you have to drag the bar against your body.

Spider curls are similarly effective for building muscle and definitely better for getting a pump because, as mentioned, they train the biceps in their most contracted position.

Overall, your best bet is to go with the drag curl if you can only do one exercise because it allows you to lift heavier and put more torque through your biceps.

I hope that you enjoyed our spider curl vs drag curl comparison. As you can see, both drills have their pros and cons, but the latter just edges it.