Learn about the heaviest curl ever performed by a human. 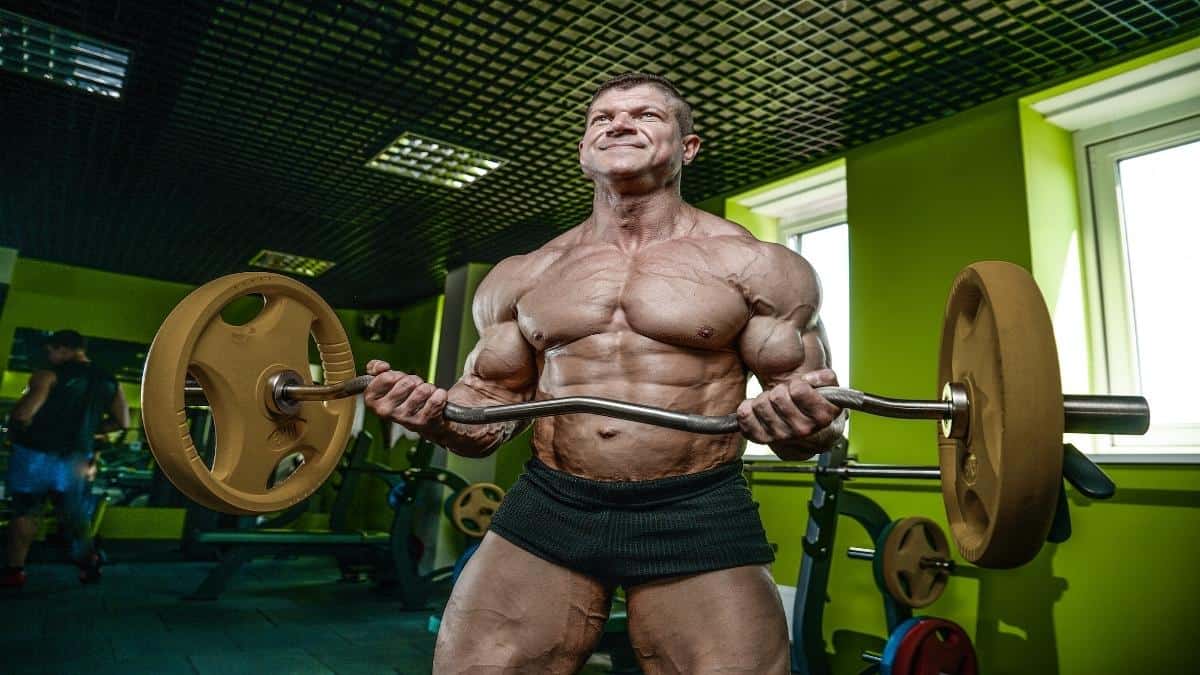 Use the links below to navigate to the section that interests you the most, or read the full article to see every kind of bicep curl record.

This world record bicep curl is a 1 kg improvement on the previous 2015 record set by arm wrestler Denis Cyplenkov, who has some of the largest biceps in the world.

There has, however, been some controversy with regard to whether Waker’s attempt was truly a strict curl. For example, Walker was handed the bar, whereas Cyplenkov picked it up himself.

Additionally, Walker used a much closer grip and didn’t have his heard against the wall like Cyplenkov.

Whether or not you agree with LeRoy Walker’s world record arm curl, there’s no denying that he has an incredible amount of biceps strength and certainly deserves recognition and praise for his outstanding 114 kg curl, which is way above the average curl weight.

What is the heaviest curl ever recorded?

Although there is no footage of this lift—and although it was likely completed with less than optimal form—there’s little reason to doubt Kazmaier’s authenticity considering his other incredible lifts.

Since this category seeks to find the heaviest bicep curl ever recorded, there’s no need for it to be strict.

Of course, everyone has their view of how to do a proper curl and what an acceptable amount of momentum is to use during a curl.

There’s footage of Magnus Samuelsson curling 140 kg (308 lbs) for reps with pretty good form, which is certainly the example of the “best-performed heaviest barbell curl.” His heavy barbell curl reps, which he did with slow-negatives, didn’t appear to challenge him all that much, and he wasn’t leaning back as much as other lifters either.

What is the heaviest dumbbell curl?

The world record dumbbell curl of 200 lbs belongs to YouTuber Kali Muscle. Although he didn’t use strict form for his curls, most people couldn’t physically hold 200 lbs in their hands never mind curl such a weight!

Additionally, in the footage of Kali Muscle curling 150 lb dumbbells, you can tell that his form is much better. While he’s technically doing a hammer curl across his body and using momentum, he’s still getting a decent amount of bicep activation as well.

There are examples of lifters doing around half the weight with perfect form. However, it’s doubtful that these people would be able to budge 150 lb dumbbells like Kali did.

The fact that Kali curled each dumbbell separately (one arm at a time) enabled him to channel all of his energy into lifting each separate weight with the maximum force. In other words, his brain didn’t need to split its focus across two limbs because he lifted each dumbbell in turn.

That’s a smart tactic to take advantage of when you’re trying to set a new dumbbell curl record like he did.

What is the world record one arm curl?

The man who operates the YouTube channel Doc. Weber holds the world record one arm bicep curl. Although there are other people who’ve lifted more weight in one hand, these lifts were nowhere near as strict as Doc. Weber’s 61 kg (134.5 lb) single arm bicep curl.

Using an adjustable bench for support, Doc. Weber lowered the monstrous dumbbell (which most people wouldn’t be able to bench press) the vast majority of the way down before using his incredible bicep strength to curl it back up.

Now, would he have been able to complete this lift if he was standing up?

I doubt it. As impressive as his 61 kg curl is, it was definitely made easier by the fact his arm was braced against an incline bench, which completely changes the strength curve of the exercise.

What is the world record preacher curl?

There’s footage of C.T. Fletcher and his friend doing EZ bar preacher curls with 205 lbs. As impressive as this feat of strength was, their range of motion was far smaller than Thommy’s and so shouldn’t count as a strict preacher curl record.

Notably, Thommy’s form was worthy of the record because he used a full range of motion. Sure, he leaned forward a bit and then back, which perhaps generated some momentum, but he used a much larger range of motion than other people who attempted to break the preacher curl record.

Conclusion: What is the most weight ever curled?

The most weight ever curled strictly is 114 kg (251 lbs) by powerlifter LeRoy “The Machine” Walker.

The most weight curled with momentum is 440 lbs (199.5 kg) by former strongman champion Bill Kazmaier. If this lift seems hard to believe, then there are also videos of Denis Cyplenkov curling 170 kg.