A back shoulder and bicep workout for maximizing hypertrophy

This high-volume shoulder back and bicep workout is ideal for hypertrophy training. 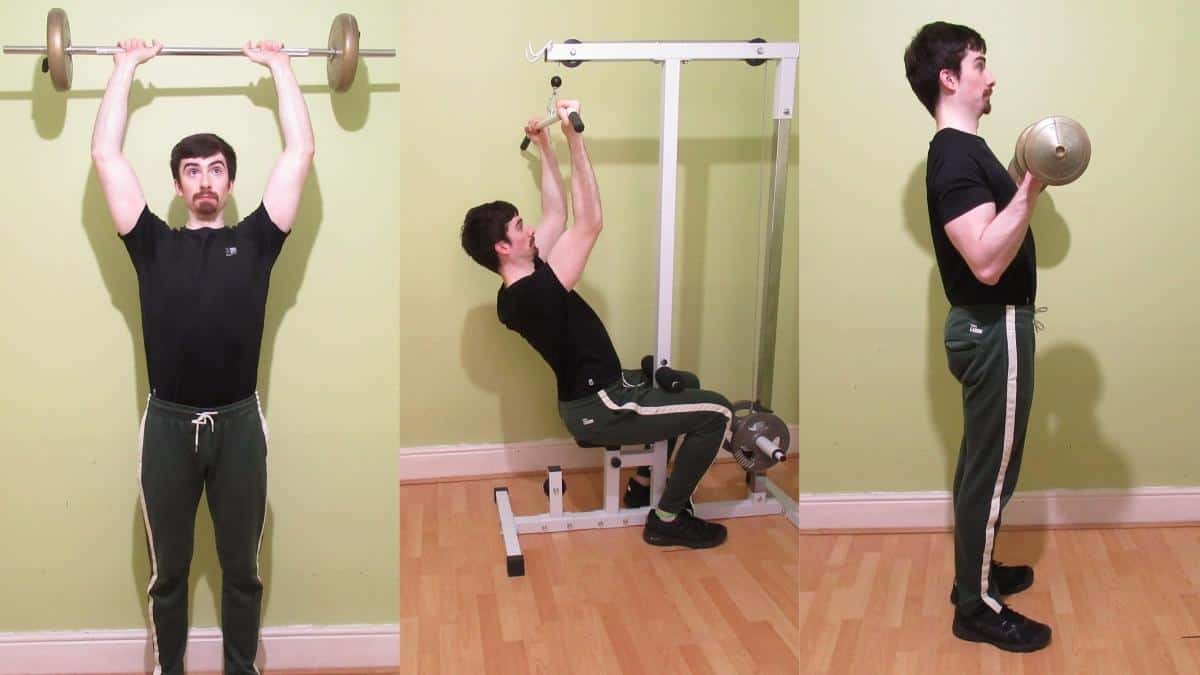 Learning all about the biceps brachii is interesting and it can really help you to understand how the muscle works. For example, knowing that the biceps flex the elbow and supinate the forearm leads to the conclusion that the best bicep exercises for mass are those which have you curl with a supinated grip.

However, sometimes you just need to dive straight into training to learn the truth about building muscle. That's why we decided to create a full back shoulder and bicep workout that you can start making gains with today.

Each exercise is laid out in order along with the sets, reps, and lifting technique. Rest 2-3 minutes between sets of compound movements and 1-2 minutes between sets of isolation exercises. While it's true that shorter recovery periods will lead to a stronger pump due to the accumulation of lactic acid, you'll be able to perform more total training volume (reps x sets x weight) by resting longer.

And training volume, as has been well established, is the primary diver of muscle hypertrophy.

You'll also notice that many of the exercises in this back bicep shoulder workout have been paired together. These are called antagonistic paired sets, and they're a huge time-saver because they enable you to cram tons of volume into a relatively short space of time.

Better yet, the pairings don't interfere with one another. For example, shoulder presses and chin-ups train opposing muscle groups, so there's no danger of weakening yourself by performing these movements back-to-back.

That said, if your cardiovascular fitness can't keep up with your muscle strength, then you may actually want to rest 30-60 seconds between exercises in the paired sets so that you don't run out of breath mid-set.

The best back bicep workout routines always include chin-ups because this mass-building movement blasts your back and biceps simultaneously while building a rock-solid core in the process, which makes for a good back biceps abs workout.

If you can already do multiple sets of 8+ chin-ups, then be sure to add extra resistance via a weighted vest or a dipping belt. While high-rep chins can certainly build muscle, you want to start this shoulder back and bicep workout with lower reps to focus on the fast-twitch muscle fibers.

High reps, when you train close enough to failure, also train the fast-twitch muscle fibers. However, low rep chin-ups will help you gain strength a lot faster than high rep chin-ups because they get you used to handling heavy weight.

You can use this strength in the future to overload your back and bis with heavier weights to make them grow larger. So even if you're a bodybuilding purist, heavy lifting still has its place in a hypertrophy-orientated program.

The overhead press is another must-do movement in any muscle-building back shoulder bicep workout because it supercharges the strength and size of your front deltoids.

Although the front delts get plenty of work from heavy bench pressing, training them separately in a shoulder press will ensure that they get the proper stimulation to grow optimally.

This is because the deltoids are always the first muscle group to fatigue during an overhead press but not in the bench press.

Shoulder presses also train your side delts and triceps to a large extent; hence, they're an excellent mass-builder that no serious lifter should ever skip.

The wide-grip pulldown, in contrast to chin-ups, trains shoulder adduction and thus emphasizes the lower muscle fibers of the lats, which is an area of the back that's a weak point for many lifters.

Pull the bar all the way down to your chest to get the most from this exercise. While it's undeniably true that a lot of gym-goers (and even some pro bodybuilders) perform half rep pulldowns and still have decent back development, they have their size in spite of their poor form.

In other words, if you do enough half rep pulldowns, you're going to gain muscle no matter what.

But you can gain even more muscle—faster—by using a full range of motion. So pull the bar all the way to your chest to achieve a proper contraction and then release the bar—under control—to get a full, deeply satisfying stretch in your lats.

The next pairing in this back bicep and shoulder workout begins with the side delt mass-builder that's known as wide grip upright rows.

Using a wide grip is critical because it will ensure that your deltoids (and not your upper traps) become the limiting factor and thus the muscle that receives the most stimulus for growth.

Just don't use an excessively wide grip or internally rotate your shoulders too much; otherwise, you'll strain your rotator cuffs and set yourself up for a shoulder impingement.

While you can do upright rows with barbells and dumbbells, I recommend using an EZ bar (especially if you're lifting heavy) to minimize the strain on your wrists.

If you want to thicken your upper back without putting excessive strain on your spinal erectors, then cable rows are the best exercise for the job.

Unlike their free-weight counterparts, cable rows challenge your traps, lats, and rhomboids with constant tension to make your back work even harder. After all, it's not like you can rest at the bottom of a cable row (like you can with a barbell row) because the pulley is always "pulling" on your back muscles.

The key is to select the attachment and use the grip that's most conducive to building the particular back muscle that's lagging on your physique. For example, if you need to bring up your lats, then use a close-neutral grip and row the attachment into your lower abs.

Conversely, if you want to maximize your back thickness by building your traps, grab a straight bar (rather than a d-handle) with a wide-overhand grip and row it to your upper abs/lower chest area.

Related: Back and bicep workout for females│Chest shoulders and triceps workout routine

You can never have too much side delt development, especially considering the vast amount of work the front delts already get from heavy presses.

Lateral raises are an integral part of this back shoulder and bicep workout because—given enough time and consistency—they make your shoulders look much broader and more muscular from every angle.

In other words, if you want to look muscular from the side and from diagonal angles, then you need to have excellent side delt development.

You already gave them the heavy tension with upright rows, so now it's time to completely isolate them with lateral raises.

The alternate dumbbell curl makes an excellent addition to any back bicep shoulder workout because it's a true mass-builder.

Because you can perform more reps per set (and thereby more volume) when you curl in an alternating fashion since each of your biceps gets a short rest while the opposite arm is working.

Similarly, since you're using dumbbells, you're also minimizing your chance of developing muscular imbalances because each bicep has to work completely independently. Ultimately, your arms and upper body will look more aesthetic and proportional when your biceps are receiving equal stimulation.

Many lifters like to debate whether the rear delt fly is a shoulder exercise or a back exercise.

Well, since you're performing a shoulder back and bicep workout, finding the answer to that question isn't particularly important because you don't need to decide which day to put your rear delt work on now that you're training back and shoulders together.

That said, you're still best off performing rear delt flys after your back work (as it's programmed in this routine) because rows and pulldowns train the posterior deltoids.

So you don't want to reduce your strength by training your rear delts too early in the workout because that would mean that you wouldn't be able to adequately overload your back.

You can also check out our hypertrophy-focused shoulder and bicep workout if you want to give your biceps a break or train them with a different body part.

The narrow grip cable curl emphasizes the long (outer) head of the biceps by having you curl with a close grip.

Just make sure to keep the bar close to your body. Otherwise, the tension will actually get shifted onto the short (inner) head of your biceps because your shoulders will be in a higher degree of flexion.

No back shoulder bicep workout is complete without an exercise that isolates your brachialis and brachioradialis muscles.

Reverse incline curls place your biceps at a mechanical disadvantage by having your curl with an overhand grip. This lack of force from the biceps means that your brachialis and brachioradialis have to take over the reins and do most of the lifting.

You can also do exercises like single arm preacher hammer curls to work your brachialis and brachioradialis. However, when you use a reverse grip (rather than a neutral grip) as I'm suggesting here, your biceps will be put in the weakest possible position, and so your brachialis and brachioradialis—two often underdeveloped arm muscles—will get to enjoy most of the muscle-building tension.

This high-volume back shoulder and bicep workout is ideal for gaining strength and building new muscle mass because it challenges you with a variety of rep ranges and exercises.

While you can change the order of the exercises, the position of each movement has already been carefully thought out so that you can train each muscle optimally.

For example, the movements that require the greatest amounts of core strength are programmed at the start of the back bicep shoulder workout.

Conversely, the single joint exercises, which are undeniably crucial for maximizing hypertrophy, are programmed last because they simply require less systemic effort from your muscular and nervous systems.

Other than that, just make sure to follow the tutorials carefully so that you can lift with the optimal muscle-building form and avoid needless injuries.