The biggest and best triceps in bodybuilding history revealed

Here are 10 huge bodybuilders who have some of the biggest triceps ever. 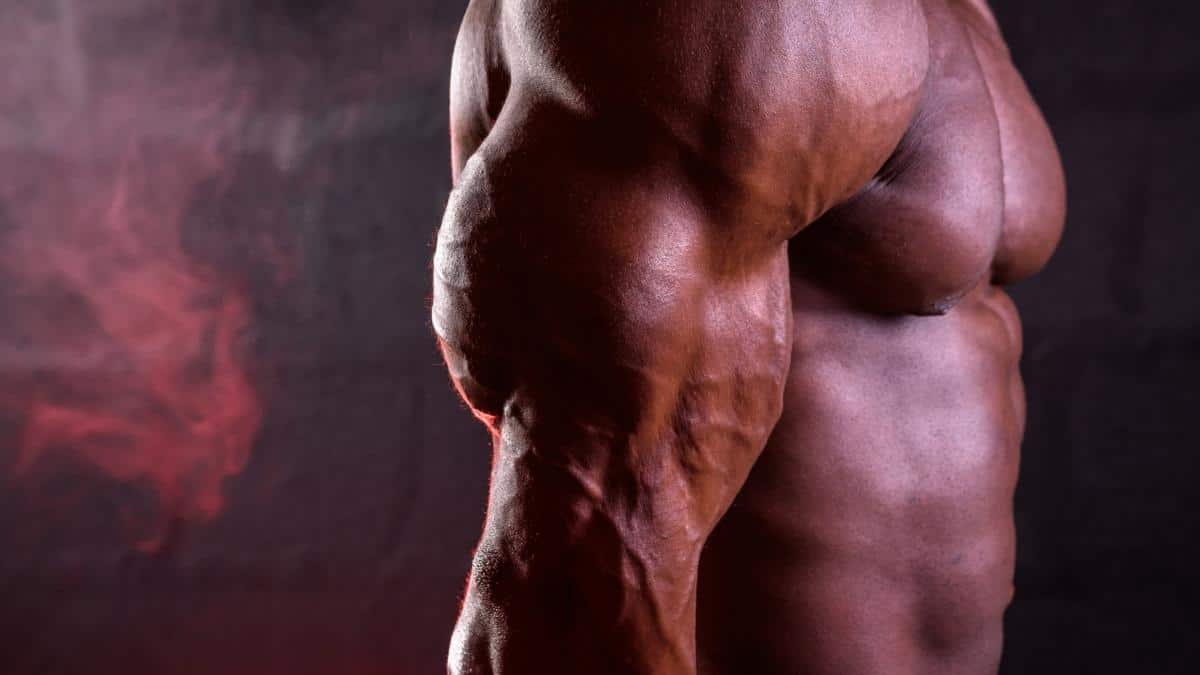 Who has the biggest triceps in bodybuilding history?

Who has the best triceps in bodybuilding history?

Here are the top 10 pairs of bodybuilder triceps ever to grace the competitive stage.

It will come as no shock to bodybuilding fans that Roelly Winklaar has the biggest and best triceps in bodybuilding history. Roelly's triceps have so much mass that they take bodybuilding to a whole new level.

In addition to his massive tricep hang, Roelly has huge triceps even when his arms are relaxed. And yet, he knows how to pose his triceps to perfection. Whether it's a signature side triceps or a cross-body arm pose, Roelly has the best triceps in the business, and nobody comes close.

For a given muscle group, it's rare that a bodybuilder is best in class from every angle—front, side, back—but that's exactly the dominance that Roelly has achieved with his titanic triceps. [1]

Phil Heath is one of the most accomplished bodybuilders of all time. His clinical conditioning and almost unbelievable size and symmetry give most of his opponents absolutely no chance on stage.

But one body part of Phil's that really stands out—especially in his most muscular pose—is his triceps. The conditioning and vascularity of The Gift's triceps are on a par with Roelly's, which is why he's (easily) earned the number 2 spot in this competitive list.

Phil Heath also has a very unique pose that shows off his triceps well—the one where his arms are fully extended by his sides.

Overall, there are really no criticisms that you can level at Phil Heath's triceps. Indeed, if Roelly Winklaar had never competed, then Phil Heath would dominate the other bodybuilders with his Olympia-winning combination of symmetry, size, and striated muscle.

Kevin Levrone's triceps are very similar to those of Phil Heath—they look unbelievably big in his most muscular pose. Levrone had some of the biggest triceps in the world, and they looked amazing both on stage and off stage, a feat that few bodybuilders are able to achieve.

In other words, he had mountains of mass that he retained and added to (with striations galore) when he stepped on stage. His lateral head just popped out at you as if his arm was formed with real steel, and his long head was thick, full, and vascular.

It's no wonder that Levrone had so many high placings and wins during his competitive career. He has enviable bodybuilding genetics that he used to great effect in his later Olympia and Arnold Classic comebacks. [2]

You've all seen the iconic picture of Lee Priest flexing his striated triceps with bodybuilding legend Tom Platz in the background, who looks pumped up with adrenaline.

You could make a strong case for Lee Priest being higher up on this list, but the competition is so stiff that it's hard to pick and choose when the top 5 competitors all have huge triceps.

Let's also not forget the massive tricep sweep of Lee Priest. His biceps were phenomenal as well, but his triceps really gave his arms a lot of mass.

Whether he was flexing as hard as possible or whether he was just standing relaxed, Paul DeMayo had some of the biggest triceps in the world. The side tricep was his pose, one that was dominated by the sheer size of his long head.

You can see in videos that DeMayo did overhead extensions for his triceps, which, in addition to his posing and incredible insertions, is certainly one reason why he had some of the world's biggest triceps.

If more bodybuilders could learn that signature DeMayo tricep flex where they really push the long head against their lats, then contests would be even more competitive.

While Eduardo Correa might not have the absolute biggest tricep muscles (though they are still positively humongous), he definitely has the most iconic and shredded triceps.

The Brazilian bodybuilder once showed off his borderline unbelievable triceps in a now-famous picture where you can literally see the individual striations on each of the tricep heads.

Correa has extremely eye-catching triceps, and they look like they're forged out of solid steel—that's how lean and defined his arms are.

The lateral head of Dorian Yates' massive triceps is one of the first muscles that you notice on his Olympia physique—it just pops out at you.

To be sure, Yates had great all-around triceps, but it was the lateral head that really stole the show. His lateral head was so big and defined that it looked like a separate muscle rather than simply a section or head of a muscle.

For this reason, the side tricep was definitely Dorian's best pose when it came to showing off his sculpted triceps.

One bodybuilder who definitely does not have bad tricep insertions is IFBB Pro Mahmut Irmak. His triceps insert so low that they connect right into his forearms. Even on a bodybuilding stage, you don't see that sight too often.

Irmak's tricep striations are on the same level as Correa's because you can literally see each individual cut and separation on the muscle bellies of his triceps.

While Irmak may not be quite as big as some of the other competitors on this list, he's definitely one of the more aesthetic bodybuilders, and he really knows how to maximize his physique through intelligent posing.

No, they're not Photoshopped; Libor Minarik's triceps are, in fact, real. The Czech bodybuilder had some of the meatiest triceps of his time. They really are a sight to behold and are big to the point where, in some poses, his lower arms are completely dwarfed.

Minarik was a posing master; he really knew how to maximize his triceps mass by pushing the long head right up against his lats. His impeccable posing technique enhanced his already incredible tricep development and earned him the rightful nickname of Mr. Triceps.

You can't talk about arms or bodybuilding without mentioning Ronnie Coleman. In terms of pure mass, Coleman's triceps were definitely up there. [3]

Although his biceps stole the show, Coleman's triceps definitely added a considerable amount of mass to his truly massive upper arms.

Heavy dumbbell overhead extensions were a staple for Coleman, which just shows how important developing the long head of your triceps is if you want to build size.

The verdict on the world's biggest triceps

So there you have it; the top 10 best triceps in bodybuilding history. While the winner was never in doubt, there are around 5 other guys who could've taken the runner-up spot.

There are just so many good pairs of triceps in bodybuilding; it took me forever to narrow them down! And it's not like any of them had small biceps but big triceps, either; they all had great overall arm development.

All things considered, Roelly Winklaar has the best and biggest triceps in the world because of his amazing insertions and next-level amounts of mass. I think it will be a long time before we see another competitor with triceps on this level.