Who has the biggest shoulders in the world and the best delts in bodybuilding history?

Here are the mass monsters with the broadest shoulders in the world. 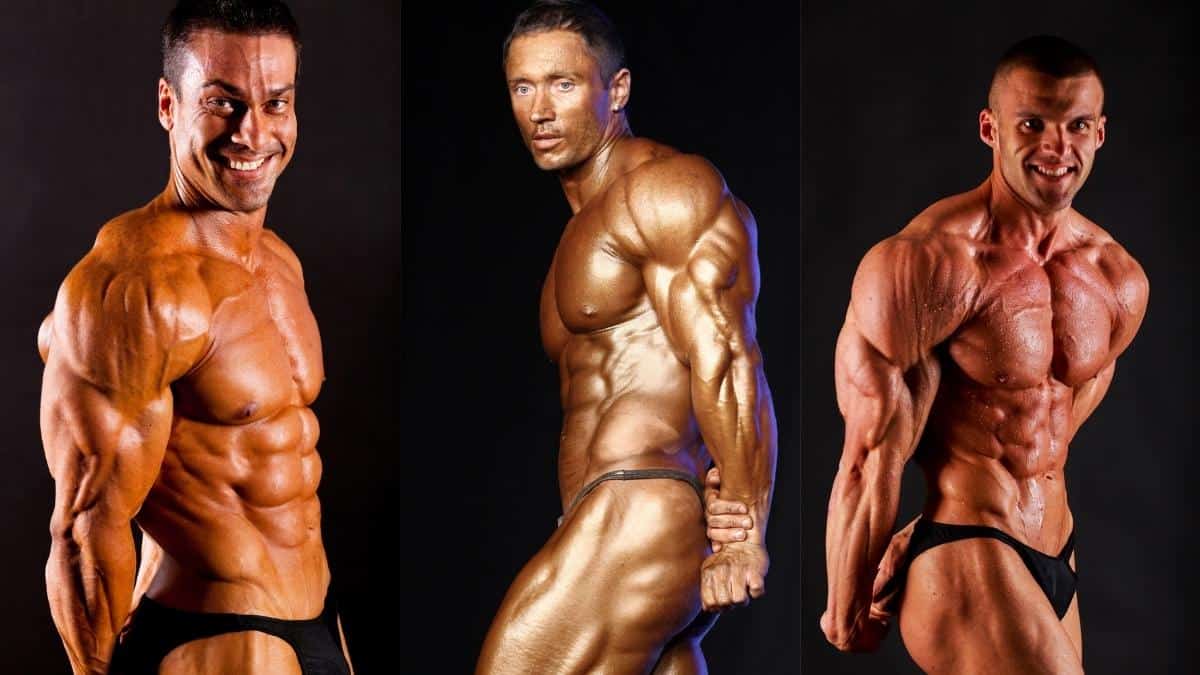 If you want to see how your deltoids compare, then you can see our article on the average male shoulder width.

Who has the biggest shoulders in the world?

Who has the strongest shoulders in the world?

Based on overhead pressing strength, the man with the strongest shoulders in the world is Cheick Sanou (more commonly known as “Iron Biby”) because he holds the Log Lift record.

Who has the biggest shoulders in bodybuilding history?

Based on overall muscle mass, the man with the biggest shoulders in bodybuilding history is definitely German bodybuilder Markus Ruhl. His deltoids were so massive that they almost looked unreal in some pictures.

Who has the best rear delts in bodybuilding history?

Who has the biggest shoulders in the NBA?

It is widely claimed that professional basketball player Dwight Howard has the biggest shoulders in the NBA. Howard's round and muscular deltoids are distinctly separated from his arms, which gives them excellent, eye-catching muscle definition.

Who has the biggest shoulders in the NFL?

Based on deltoid mass and definition, the man with the biggest shoulders in NFL history is former American football player Vernon Gholston. Other contenders include Clay Matthews and Robert Turbin, who definitely had some of the broadest shoulders in the NFL.

Here is a top 10 list of the best shoulders in bodybuilding history. Selecting the top 5 was very difficult indeed, as I had to decide between pure mass, definition, symmetry, and overall aesthetics.

Mass monster Markus Ruhl has the biggest delts in bodybuilding history. Ruhl had a very big frame for a professional bodybuilder, and his long clavicles enabled him to go toe to toe with legends like Ronnie Coleman.

During his most muscular poses, Ruhl's shoulders looked so big that his head actually looked like it had been photoshopped onto his body—as if humans weren't meant to have deltoids that massive.

Not only did Markus Ruhl have some of the best delts in bodybuilding, but he also had some of the widest shoulders ever. He completely dwarfed his opponents on stage because of his incredible combination of frame size and muscle mass, so it's only fair that this German mass monster gets the number 1 spot.

Without massive physiques, bodybuilding just wouldn't be bodybuilding; that's why Roelly Winklaar earns the number 2 spot on our top 10 list.

Checking in with a 300lb physique and shoulders that are truly three-dimensional, Roelly Winklaar is a complete mass monster.

His deltoids have plenty of separation and vascularity while still retaining the fullness that so many other competitors seem to lose on stage. This is crucial because, as Roelly himself says, you can never have too much shoulder development as a bodybuilder. [2]

What many people don't talk about is this: If Roelly's arms weren't so unbelievably huge, then his deltoids would look even bigger and rounder than they already are. So, depending on your point of view, you could make a good case for Roelly taking the number 1 spot because he definitely has some of the largest shoulders ever.

In the opinion of many bodybuilding commentators and enthusiasts, Kevin Levrone has the best shoulders in bodybuilding history. The reason that I put him at number 3 (it was a tough decision) is that Ruhl and Roelly have more mass, which is the foundation of any pair of bodybuilder shoulders.

With that disclaimer out of the way, let me say that Kevin Levrone had some of the most aesthetically-pleasing shoulders of all time. The way that his delts separated from his arms made his upper body look like it was carved from stone.

If you ever needed visual proof that the deltoids are one of the most crucial bodybuilding muscle groups, look no further than a Kevin Levrone most muscular.

When Levrone brought his arms across his body and flexed, your eyes were instantly drawn to his chiseled deltoids, especially his ginormous front delts. If I was writing this article before the turn of the century, then Levrone would be number 1 for sure.

Phil Heath might not have the broadest shoulders ever in terms of clavicle length, but he more than makes up for it in deltoid mass and definition.

The seven-time Mr. Olympia winner has show-winning delts that are in perfect proportion to the rest of his physique. No matter whether it's a side chest, a back double bicep, or the most muscular, The Gift's shoulders always bring top-class size, shape, separation, and symmetry to the stage.

Looking at Phil Heath's shoulders, I'd say that they look very similar to those of Kevin Levrone—especially in the most muscular pose. I just gave Levrone the edge because I think that his delts stand out more from the rest of his physique.

The eight-time Mr. Olympia winner had it all. From the front, back, and side, Big Ron's deltoids were round, striated, and vascular. And he was a very consistent performer in the shoulder department as well. Therefore, you could make a strong case for putting him much higher on this list.

During his shoulder workouts, Ronnie Coleman would do heavy shoulder presses with free weights as well as on the machine. But unlike some other bodybuilders, Coleman would also isolate his anterior delts with front raises, which may well have helped him to fit so much deltoid mass on his frame.

The late Dallas McCarver, who sadly passed away in 2017, had one of the biggest physiques in modern bodybuilding. [3] At just 26-years-old, McCarver had sculpted some of the biggest shoulders ever and was on track for an indelible bodybuilding career.

In terms of sheer deltoid size, Dallas "Big Country" McCarver could compete with the best of them. His shoulders were so big that they looked permanently pumped.

McCarver's front delts, in particular, were perhaps the biggest of all the present-day bodybuilders. I don't doubt that his physique would have gone from strength to strength had he lived longer.

Nasser El Sonbaty had some of the biggest delts in bodybuilding history. In addition to slabs of mass that made his shoulders virtually unbeatable on stage, Nasser's deltoids also boasted incredible separation and detail.

A bodybuilder with a big personality, Nasser was also one of the first mass monsters on the scene. So in this sense, he revolutionized what it meant to be big, and nowhere was that more clear than with his massive deltoids.

Weighing over 300 lbs in the offseason, Nasser El Sonbaty was adept at putting on mass while staying lean. Ultimately, "The Professor's" commitment to the bodybuilding lifestyle enabled him to have a very illustrious competitive career, including some very high Mr. Olympia placings.

Paul Dillett had highly aesthetic and yet truly massive deltoids—easily some of the world's broadest shoulders.

At around 6′2″, Dillett wasn't your typical bodybuilder. He made the most of his large frame and long clavicles to sculpt some of the best deltoids in bodybuilding history.

His instantly-recognizable physique had an incredible amount of width, virtually guaranteeing that anyone standing next to him would be completely dwarfed. It's no wonder that Dillett earned the nickname Jurassic Paul.

Before creating this list of the world's biggest shoulders, I had thought that Jay Cutler would receive a much higher placing. But given stiff competition from the likes of Ruhl, Levrone, and Heath, Cutler missed out on a top 5 spot.

But given his proportional and well-developed deltoids, I couldn't leave Jay Cutler out of the rundown altogether. The four-time Mr. Olympia winner still had some of the world's biggest deltoids in his prime, especially when viewed from the side.

The side delts of Jay Cutler were a force to be reckoned with and, in my opinion, were the perfect size for the rest of his massive physique.

Then, when Cutler hit his signature side tricep pose, he brought the house down. The separation between his delts and arms was just incredible because the deep cuts made his shoulders look even more three-dimensional. Overall, he still has some of the largest shoulders of his era.

If mass and width are the names of the game, then Dennis Wolf is your man. Wolf has one of my personal favorite physiques because of his wide frame and narrow waist, which is one of the hallmarks of a truly masculine, superhero-like physique.

Wolf had some of the world's widest shoulders thanks to his enviable combination of clavicle width and deltoid muscularity. Most IFBB Pros could train their entire lives, and they still wouldn't be as wide as the Big Bad Wolf.

Ultimately, Dennis Wolf absolutely deserves his place on this list of the biggest shoulders in bodybuilding, and, given the sheer mass that his delts had, you could definitely make a good case for placing him higher.

Conclusion: Why is having the widest shoulders so important for bodybuilding?

The deltoids are the widest point on your physique; they give your body that aesthetic v-taper that virtually every gym-goer wants to achieve.

Having well-developed shoulders is crucial for physique athletes because round deltoids really draw the eye, which means more attention from the judges.

Also, unlike other body parts, the deltoids are highly visible in every pose due to their 360-degree anatomy. That's why it's so crucial to have no weaknesses in the shoulder department.

So now that you know who has the biggest shoulders in the world—Chuck Ahrens—and the best shoulders in bodybuilding history—Markus Ruhl—you can see why the deltoids are such an important muscle group.