How to work your lower bicep: Exercises, workouts, training tips

Can you really work your lower biceps? Biomechanics and physiology research says that you can. 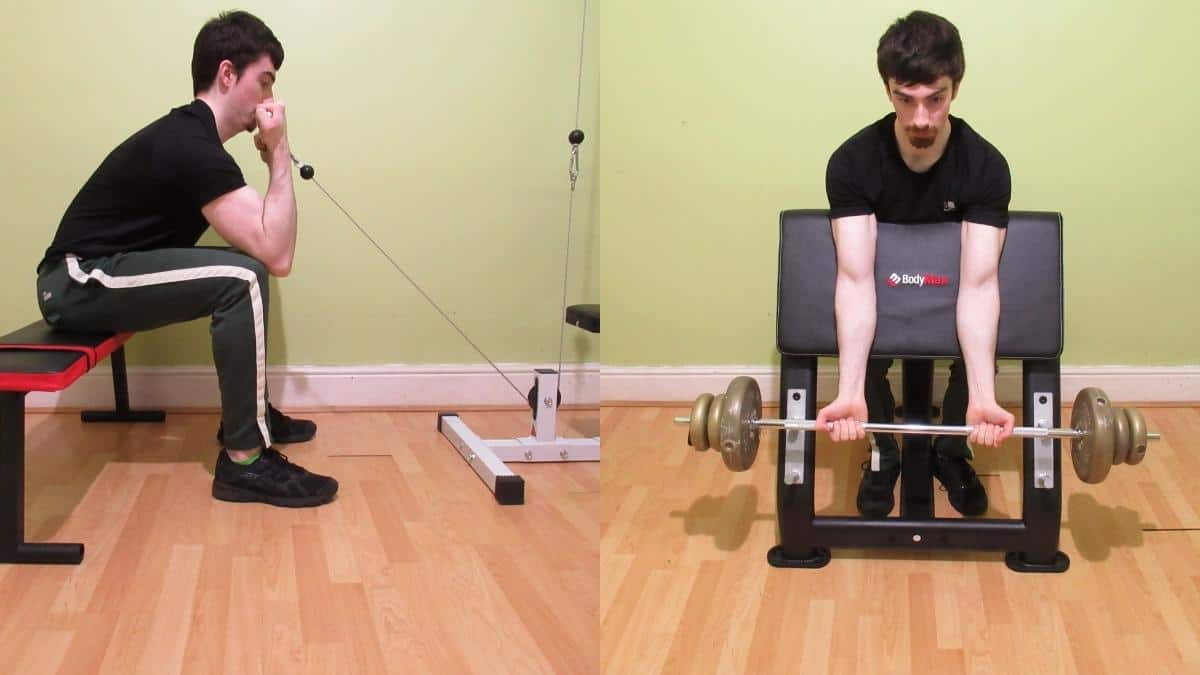 When you understand the science of the biceps, you begin to realize that certain exercises place more tension on the lower portion of your biceps than others. But does that extra tension lead to more muscle growth and a lengthening of the biceps themselves?

This guide reveals whether you can genuinely target and add mass to your lower biceps.

How to work your lower bicep

Before we get into the most optimal biceps workout for training the lower part of your muscle, let's understand what you need to do now (and how you need to do it) if you want to build lower bicep size.

While you can't change the insertion of your biceps, you can definitely accentuate certain regions by performing the right exercises.

An effective lower bicep workout entails selecting the right exercises for the job.

While it's true that building more overall bicep size will also help the lower part of your biceps to develop, that doesn't mean that you can't still emphasize certain regions of your biceps to make them grow faster.

Movements like preacher curls, which are the most challenging when your elbows are near lockout, place more tension on the lower portion of your biceps than standard curls.

This is because, during regular curls, your biceps are under less tension the closer your elbows get to full extension.

But with preacher curls and the like, the opposite is true. So the muscle fibers in the lower region of your biceps have to work harder to lift the weight during the initial part of the concentric phase and during the last part of the eccentric, which is to say when your biceps are almost fully lengthened.

Use a full range of motion

If you want to recruit the broadest range of bicep muscle fibers possible, then you need to curl with a full range of motion.

Not only should you get a strong peak contraction, but you also need to achieve a proper stretch.

Lower the weights all the way down until your elbows are locked out, and your biceps are fully lengthened.

A good tip in this regard is to flex your triceps at the bottom of each rep. Since the triceps and biceps work antagonistically, you know that your biceps are lengthened when your triceps are contracted.

You can't expect your lower biceps to grow if you're not training the biceps as they were designed to be trained.

Since the biceps supinate the forearm and flex the elbow, you need to forcefully supinate your wrists at the top of each rep, which is to say turn your pinky fingers away from your body.

This simple turn of the wrists intensifies the peak contraction and ensures that you're doing everything in your power to recruit those lower bicep muscle fibers.

Now you'll learn why each of these lower bicep exercises is effective as well as how to perform them for the best results.

Performing preacher curls with dumbbells places a significant amount of tension on your biceps when your elbows are close to full extension. This means that the lower muscle fibers have to contract especially hard during the first few inches of movement of the concentric phase.

Of course, these same fibers also get put under a tremendous stretch during the eccentric part of the rep as well.

Moreover, since you're using dumbbells and thus training each arm independently, you can ensure that you're sculpting symmetrical biceps because it's not like one side can compensate for the other as it can during barbell training.

Dumbbells also enable you to maximally supinate your wrists at the top of each rep. This enhanced supination, in turn, intensifies the peak contraction and engages the most amount of muscle fibers possible.

The EZ biceps preacher curl is one of the most effective short head bicep exercises that you can do because you're curling when your arms are in flexion, which naturally shifts the emphasis onto the inner muscle fibers of your biceps.

The inner fibers are actually the region of the biceps that can make your bis look longer and more developed at their lower end. So make sure to perform plenty of exercises that have you curl in front of your body if you want to build your lower biceps to the max.

While the EZ bar doesn't enable you to achieve maximum bicep supination, it does put less strain on your wrists than a regular barbell and comparatively more tension on your brachialis and brachioradialis, two muscles that are no less critical than the biceps for growing your arms.

The straight bar preacher curl is arguably the best exercise for lower biceps development because it enables you to overload your bis with the heaviest possible resistance.

Using a straight bar for preacher curls, while it does put more pressure on your wrists and forearms than an easy curl bar, also trains your biceps in their fully supinated and thus maximally contracted position.

Many coaches and bodybuilders believe that achieving proper supination (along with a full range of motion) during curls is of paramount importance for building lower bicep mass.

After all, can you really expect your lower biceps to grow optimally when they're not receiving a sufficient stretch or contraction?

No, you can't. So providing that the barbell doesn't hurt your joints or connective tissue structures, make sure to use it in addition to dumbbells during your lower bicep workouts.

The sitting cable concentration bicep curl feels a lot like a preacher curl but with constant tension.

It's an excellent lower bicep exercise because you can't swing the bar up since your elbows are supported against your knees. This means that all of the movement has to come from the biceps themselves rather than your front delts.

Cables also make your biceps work harder than free weights because your biceps can't rest at any point in the rep since the pulley is always exerting some kind of force on the working muscles.

This means that your lower biceps have to work even when your elbows are locked out because they're getting put under a stretch by the cable pulley.

Lying bicep curls are one of the best lower bicep exercises (perhaps even the best) because they place an incredible amount of tension on your lower biceps.

Lying biceps curls are one of those exercises that's intense enough to make you grimace while curling half of your usual weight!

That said, you also get virtually no peak contraction during lying dumbbell curls because the exercise becomes exponentially harder the closer your elbows get toward lockout. The trade-off, of course, is that it provides the best stretch of any bicep-builder out there.

Just make sure to lower the weights slowly so that your lower biceps have to resist all of the weight during the eccentric phase of the rep. Also, make sure to lift much lifter than you usually would because lying curls train the biceps in one of their weakest (i.e., maximally lengthened) anatomical positions.

The workout starts with preacher curls, which, as we established, are an excellent exercise for lower biceps development. They’re also useful for working the biceps as a whole because you can't swing the weight up and cheat yourself out of muscle growth when your arms are supported by the pad.

Cable concentration curls blast your lower (and upper) biceps with constant tension and give you a great pump in the process. Make sure to use a full range of motion for the best results, even if that means reducing the resistance slightly.

Then it's onto lying dumbbell curls to work your bis from yet another angle. This time you're putting your biceps under an intense stretch to break down the muscle fibers and stimulate robust hypertrophy. Just be sure to perform slow eccentrics because you don't want the dumbbells to just drop—your biceps should resist the weight.

The seated incline DB curl is one of the best long head bicep exercises, but it's also effective for building mass in general. So even though we showed you how to build lower bicep size, it's still important to train the other parts of your biceps if you want to achieve complete development.

That's why incline curls are in the routine.

You also don't want to forget about your brachialis and brachioradialis muscles, either. The brachialis is a deep elbow flexor that lies beneath the biceps. As such, when you add mass to this muscle, it actually pushes your biceps out and makes them look taller (see our guide to the most effective bicep peak exercises for more info on this).

You can build your brachioradialis by doing reverse bicep curls with cables or even the preacher barbell reverse curl if you prefer free weights. Just make sure to use a thumbless grip so that the bar isn't just resting in your fingers; you want your brachioradialis to be doing as much work as possible.

The incline bench alt hammer curl is a good hybrid exercise because it works your biceps, brachialis, and brachioradialis fairly evenly. And because you're training each arm in an alternating fashion, you'll naturally be able to perform more reps per set because your biceps and co get a short rest while your opposite arm is working.

Conclusion: What is the best exercise for lower biceps development?

Although there haven't been any specific studies into lower bicep development, there is research to show that preacher curls are especially challenging for the biceps in the first few inches of movement, which is the phase of the rep where the lower bicep muscle fibers are most active.

Of course, you should do more than just preacher curls in your lower bicep workout. Lying curls, even though you'll have to lift lighter on them, place your biceps under a skin-splitting stretch that other exercises simply cannot replicate.

Moreover, by working your biceps from different angles and thereby recruiting a broad range of muscle fibers, you'll be going a long way to ensuring that your lower biceps are growing at an optimal rate.