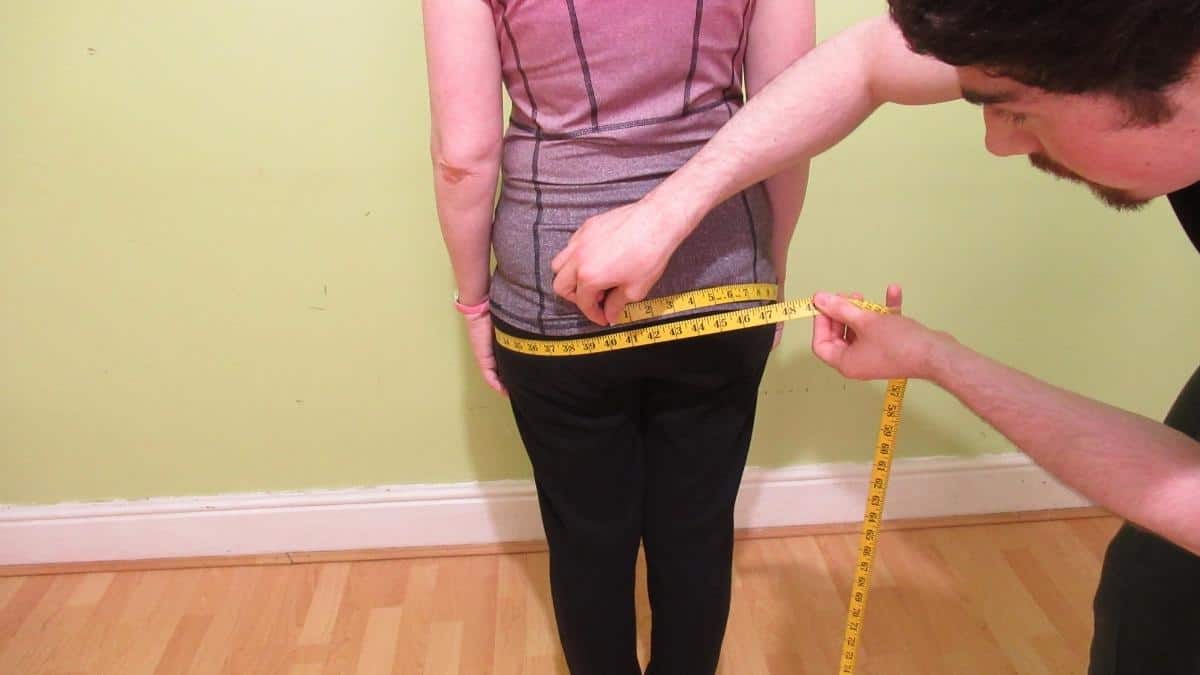 Your hip measurement can be used to determine your physical health, fitness progress, and even your physical attractiveness. With this in mind, knowing the average hip size for women, men, teenagers, and children can help you to understand how your body is built and what this means for your health and wellbeing.

So, in addition to showing you how to measure your hips and answering various frequently asked questions, we'll also discuss the average hip measurements for both males and females of various ages.

What is the average hip size for women?

As expected, however, the average female hip size depends on the age of the woman being measured. But the general trend is that female hip circumference peaks during middle age and then gradually decreases as the woman gets older.

Specifically, women aged 20-29 had an average hip circumference of 38.7 inches or 98.2 cm, which was the lowest measurement of all the examined age groups.

The largest female hip measurement was observed in the 50-59 age group, where the average hip girth was 41.5 inches or 105.4 cm.

See How Your Hips Compare:

What is the average hip size for men?

What is the average male hip size? Based on data from a National Center for Health Statistics report that measured 7,411 adult males, the average hip size for men is 39.2 inches or 99.6 cm.

What is the average hip circumference for teenage girls?

As expected, the average hip measurement for a female teenager tends to increase as she gets older. Here is the measurement data by age.

Finally, the average female hip circumference for 19-year-old girls is 38.4 inches or 97.6 cm.

What is the average hip circumference for teenage boys?

According to American anthropometric data, the average hip circumference for a teenage boy ranges from 33.6 inches at 13 years old to 37.8 inches at 19 years old.

Here is the breakdown by age:

What is the average hip width for women?

What is the average female hip width measurement? According to US anthropometric research that measured the ​​biiliac breadth of 8,356 females, the average hip width for women is 11.45 inches or 29.1 cm.

Biiliac breadth—which is essentially the anthropometric term for maximal hip width—is a measurement that's taken between the most lateral points on the outer part of the iliac crest. [2]

What follows is the average female width for women of various ages.

What is the average male hip width?

What is the average male hip width? Based on measurement data from a National Health and Nutrition Examination Survey, the average hip width for men is 11.7 inches or 29.6 cm.

Here is the average hip size by age group:

Finally, the normal hip width for men aged 60-69 and 70-79 was found to be slightly larger—although virtually identical—at 12.1 inches.

The following 5 hip size charts discuss hip width and hip circumference for males and females. Additionally, the first chart shows you what female clothing sizes each hip measurement is equal to.

The specific clothing size for any given hip circumference measurement heavily depends on the brand of clothing, the type of garment, and the country in which the clothing is sold.

With this in mind, we analyzed the size charts of various clothing brands and created our own hip size chart for women that shows the clothing size (S, M, L), the corresponding US clothing size, and also the full hip measurement in inches.

In the above chart, you'll find the average hip measurements for women of various ages, which is useful for understanding how your body compares.

It's interesting that women typically have larger hips than men by 1-2 inches in many cases, especially considering that data from the same sources shows that men had a larger biiliac breadth than women.

These differences indicate that women store more fat around their hips than men, which can actually be protective against cardiovascular disease. [3] Additionally, a large hip circumference can be an indicator that someone has a lot of fat-free mass.

As mentioned, female hip circumference peaks between the ages of 50-59 and then decreases gradually into old age, which may be due to inactivity and sarcopenia.

Although age is a strong predictor of the average hips size for women, your body composition and bone structure also affect your hip circumference measurement.

As in the female measurement data, the largest average hip circumference in males was observed in men between the ages of 50-59. This is most likely due to middle-aged men having a higher body mass (and potentially more fat-free mass) than younger men.

When working with anthropometric data, you generally expect to see a decrease in circumference measurements—oftentimes significant decreases—as the participants get older. So it's highly interesting to observe the general maintenance of hip circumference in men as they age.

This could well be because gluteal muscle mass—a strong predictor of hip size—is preserved by walking around, whereas other body parts (like the upper arms) aren't used as much during everyday life (certainly not while walking like the glutes are) and thus require direct resistance training in order to maintain their girth.

Based on the data displayed in the chart above, female hip width peaks between the ages of 50-69 (the same is true for males).

The reason for this is that older people have wider hips than younger people because the pelvic bones become wider with age. Indeed, researchers from the University of North Carolina found that, on average, participants aged 80 had hips that were 2.2 cm wider than those aged 20. [4]

This data, which was published in the Journal of Orthopaedic Research, perfectly explains why hip width increases with age, although, based on the chart above, hip width does seem to level off at around age 50-60.

As with the women's hip measurement data, male hip width increases with age and peaks between the ages of 60 and 79.

As mentioned, unlike many other bones in the body, research shows that the hips keep growing with age.

This explains why biiliac breadth (hip bone width) can increase with age, whereas hip circumference (which takes into account fat and muscle mass) tends to decrease with age.

How to measure your hips (circumference)

You can also measure your own hips in front of a mirror (you need to keep the tape measure straight). For the best accuracy, however, it's recommended to have your hips measured by someone else so that they can ensure that the tape measure remains parallel to the ground.

So with that said, here's how to measure your hips with a tape measure.

How to measure your hip width

Measuring your hip width (also known as biiliac breadth) is useful for determining your bone structure and frame size.

This kind of data is especially useful for scientists engaging in anthropometric study and bone development research, and it can also be used by exercise scientists to determine one's gluteal muscular potential (large hips have more space for gluteal muscle mass).

To measure your hips width correctly, you'll need a large bone anthropometer, which is the measuring device that you can see in the picture above. Avoid using a tape measure when measuring hip width because it will lead to inaccurate results.

Learn everything there is to know about hip size in this helpful hip measurement FAQ.

What is hip size? 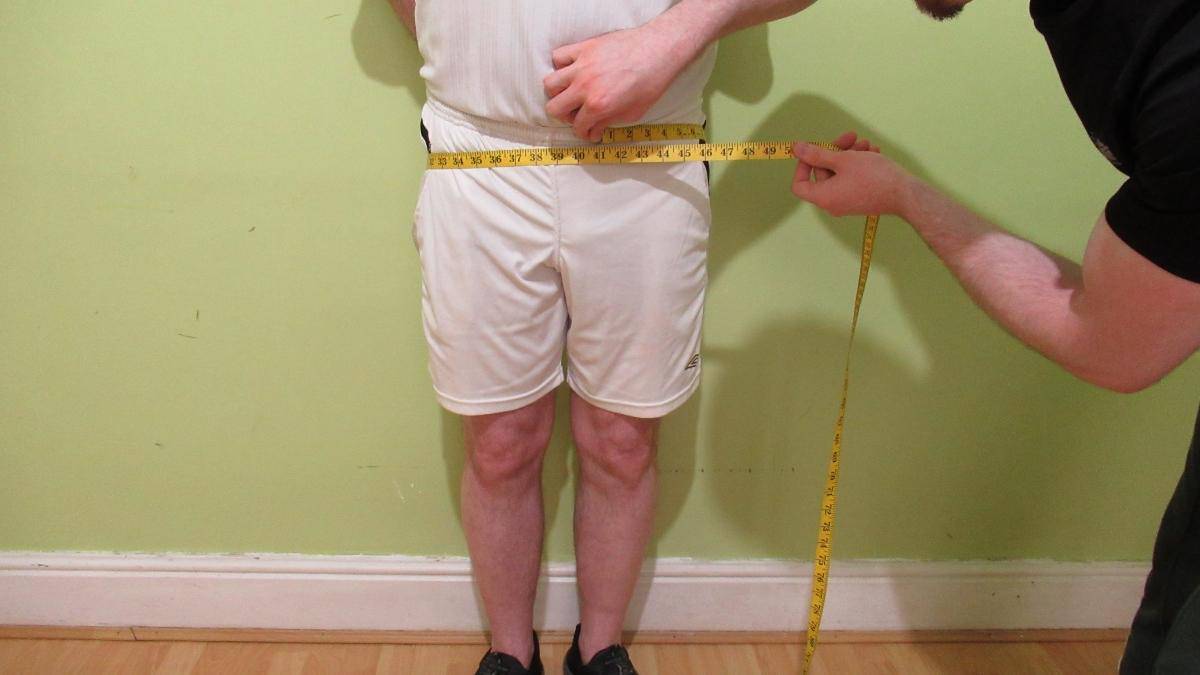 Hip size, also called hip girth, refers to the circumference of the human hips. Hip size is commonly measured with a flexible clothing tape and takes into account the width of your hip bones, the muscularity of your glutes, and the body fat around your hips.

Is there such a thing as the perfect hip size for a woman? 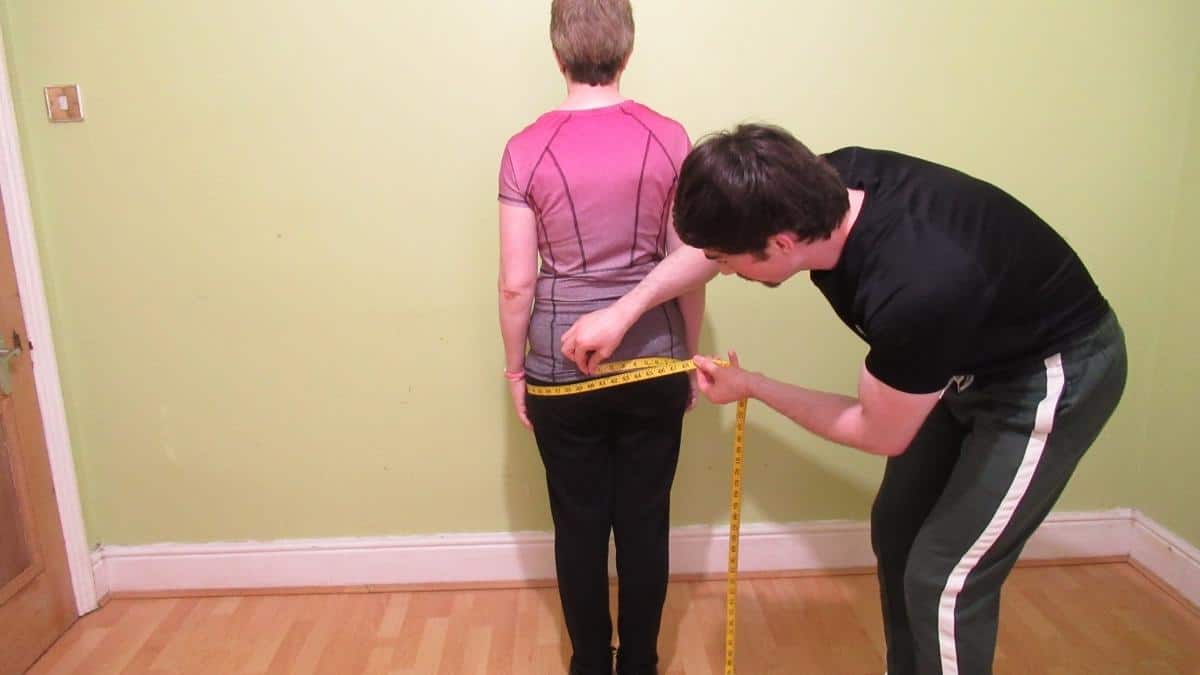 Is there such a thing as perfect hips for a woman? Data published in the International Journal of Obesity—which measured over 32,000 men and women in 19 different populations—found that the average hip measurements for men were between 37 inches and 41 inches and between 38 inches and 42.5 inches in women. [5]

So, based on this extensive research, you could say that the ideal hip size for women falls somewhere within this 5-inch range.

However, what's more important is your waist-to-hip ratio. In general, research shows that women with a waist-to-hip ratio of between 0.65 and 0.75 (0.7 is often thought to be ideal) are rated most attractive by men. [6] 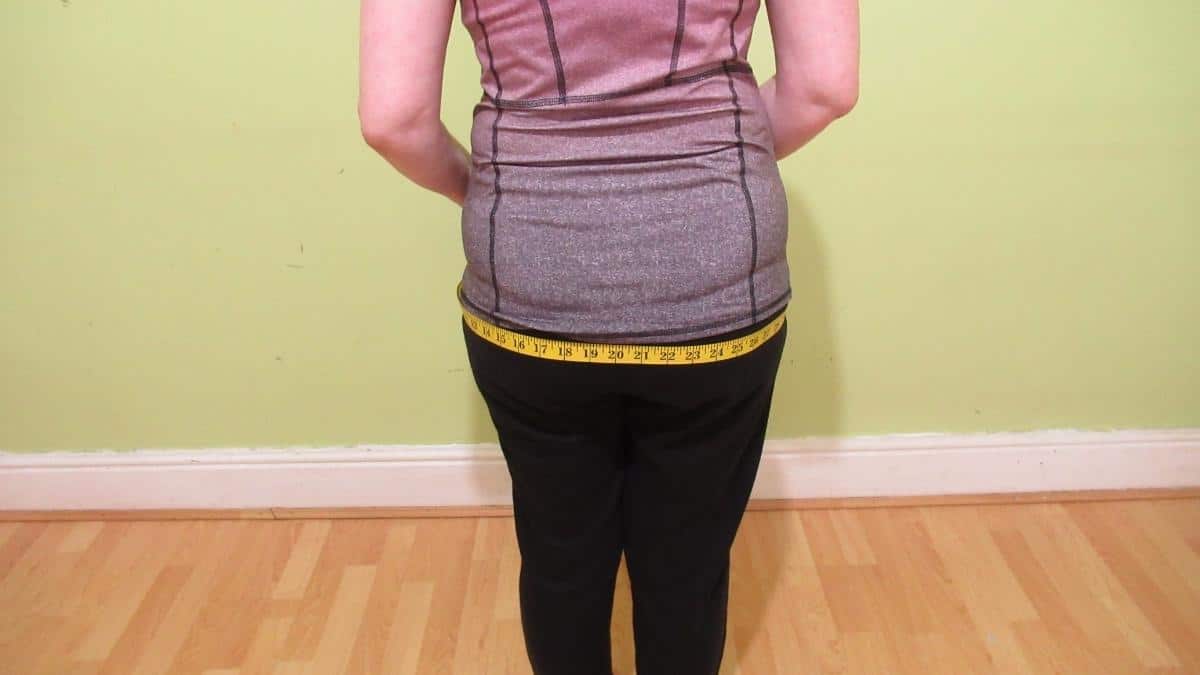 It depends on your waist, hip bone structure, ethnicity, and body fat level, but in general, the ideal hip size for a 5'5″ woman is between 37 and 42 inches.

As mentioned, it appears that your waist-to-hip ratio (WHR) is much more important than your hip size alone for determining attractiveness and also health, so make sure to factor in your other body measurements as well.

What is a healthy hip size? 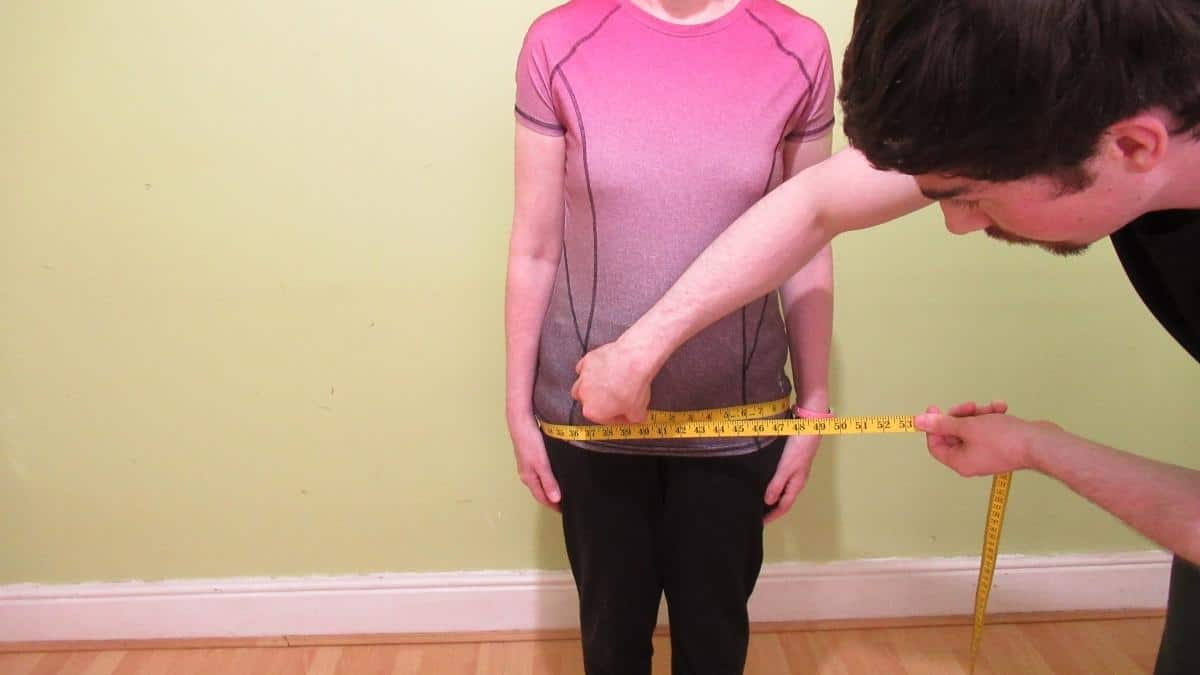 What is a healthy hip measurement? There is no one healthy hip size—although you could say that the average measurements noted above are, for the most part, healthy.

However, the size of your hips means very little without your waist measurement. Indeed, the size difference (or the ratio) between these two body parts is very important because women with a high WHR have an increased risk of cardiovascular disease, diabetes, and certain types of cancers.

Where should you measure your hips? 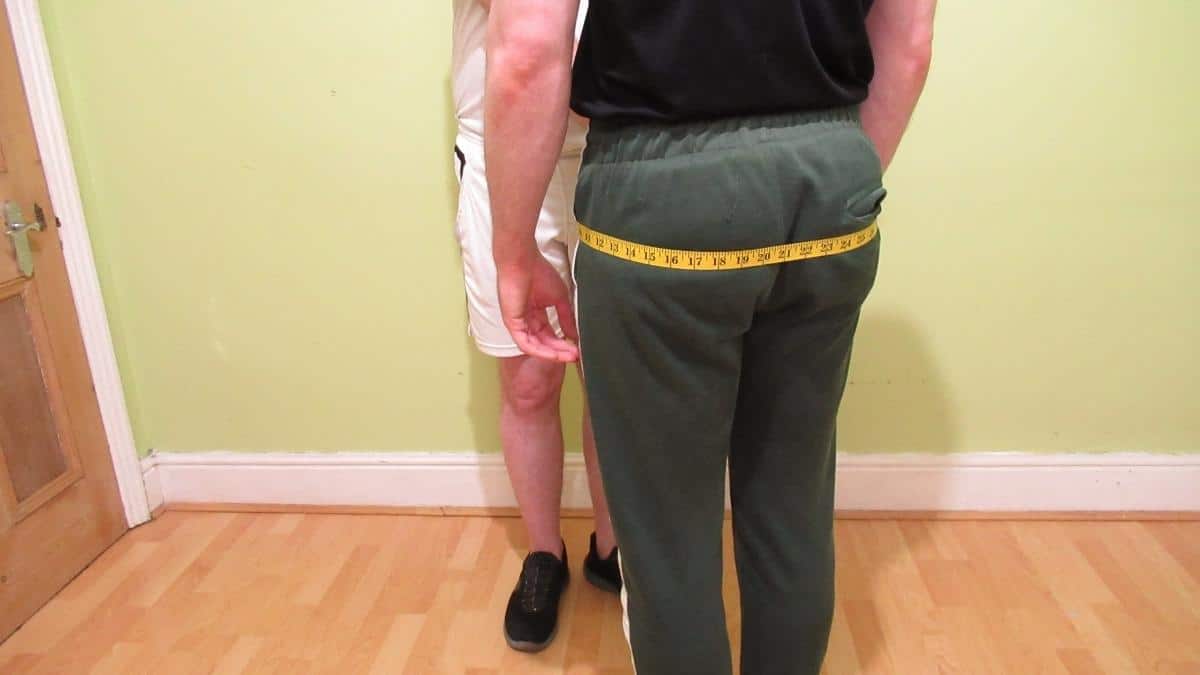 What is the difference between a hip width measurement and a hip circumference measurement? 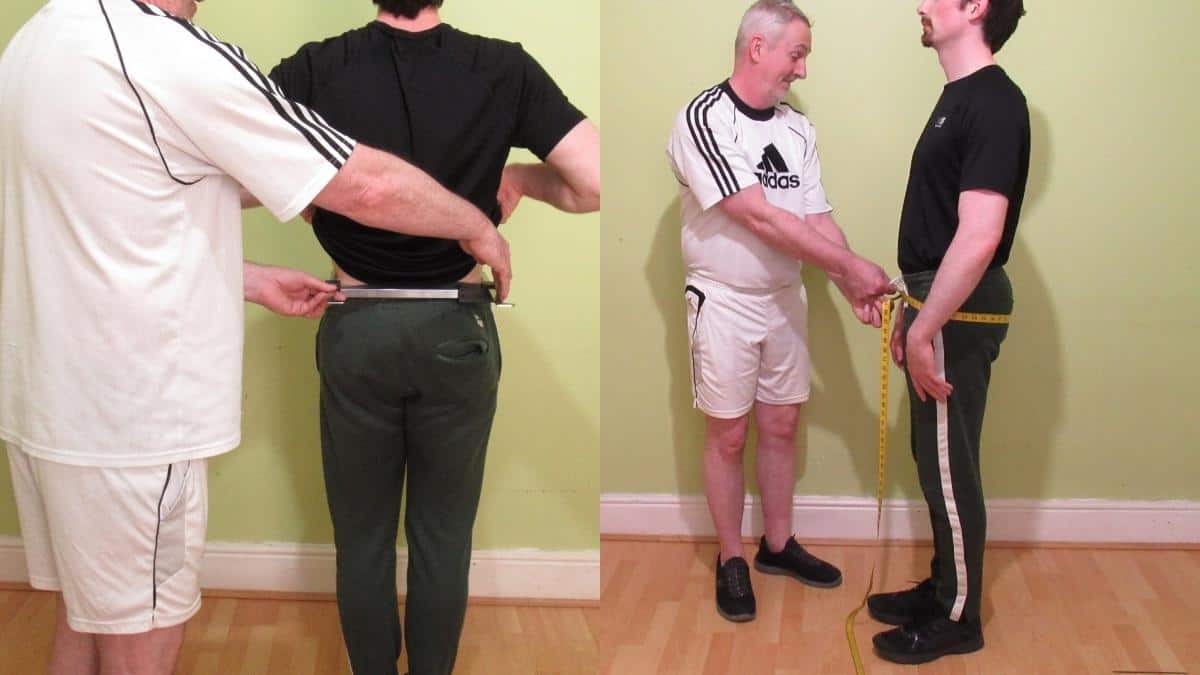 With this in mind, hip circumference factors in your bone mass, muscle mass, and fat tissue, whereas hip width only measures the width of your hip bone.

Should you measure men's hips and women's hips differently? 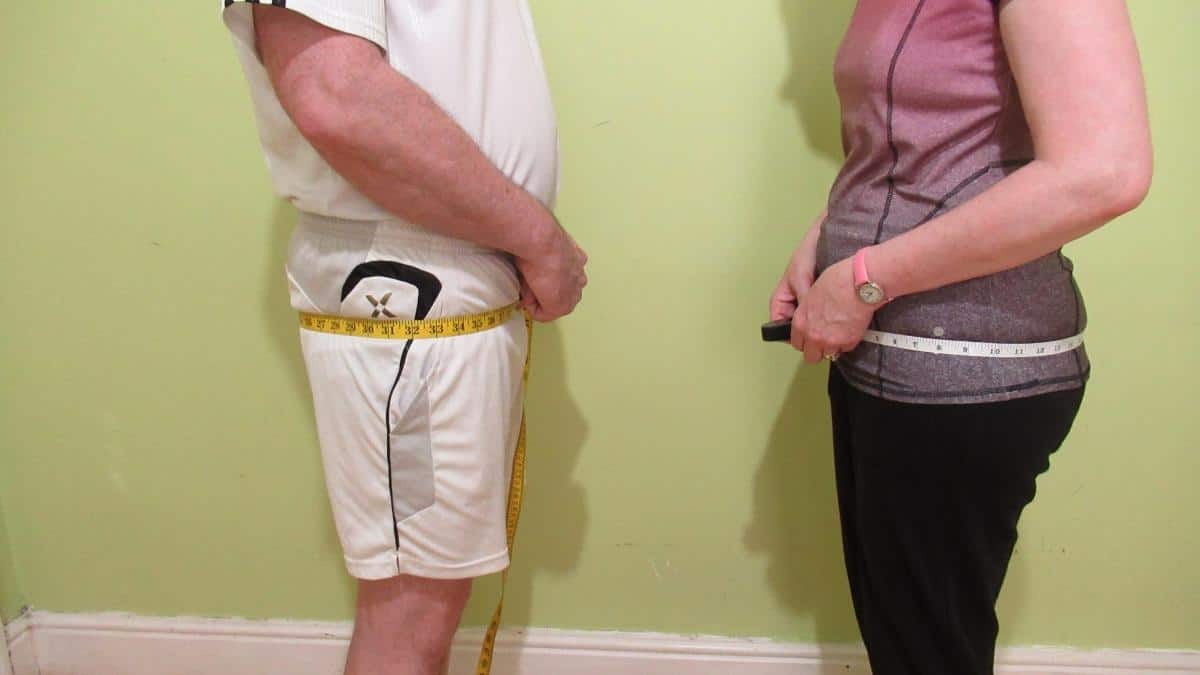 No, you measure the hips of men and women in the exact same way, which is to say, around the fullest part of the hips/buttocks. You will find that, in general, women have a larger hip measurement than men.

How can you measure your hips without a tape measure? 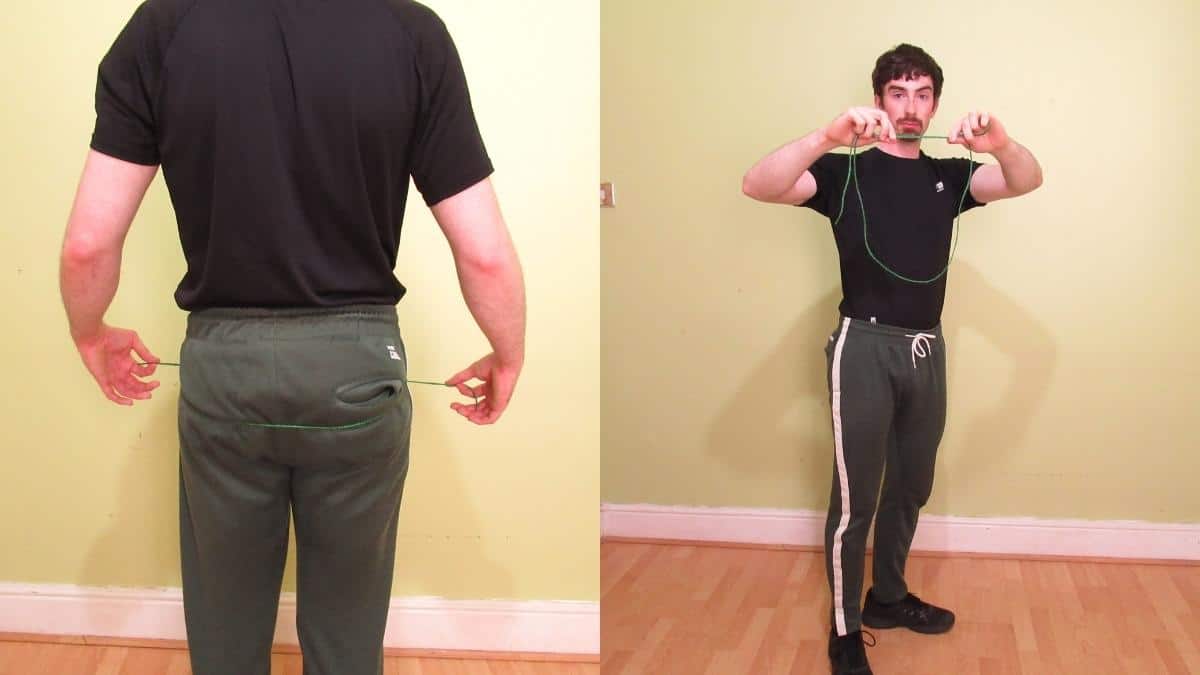 Then, you simply measure between the two points on the string using a ruler to get your hip girth.

Of course, your best bet by far for determining your hip size is to use a flexible tape measure.

What is the average hip size by height? 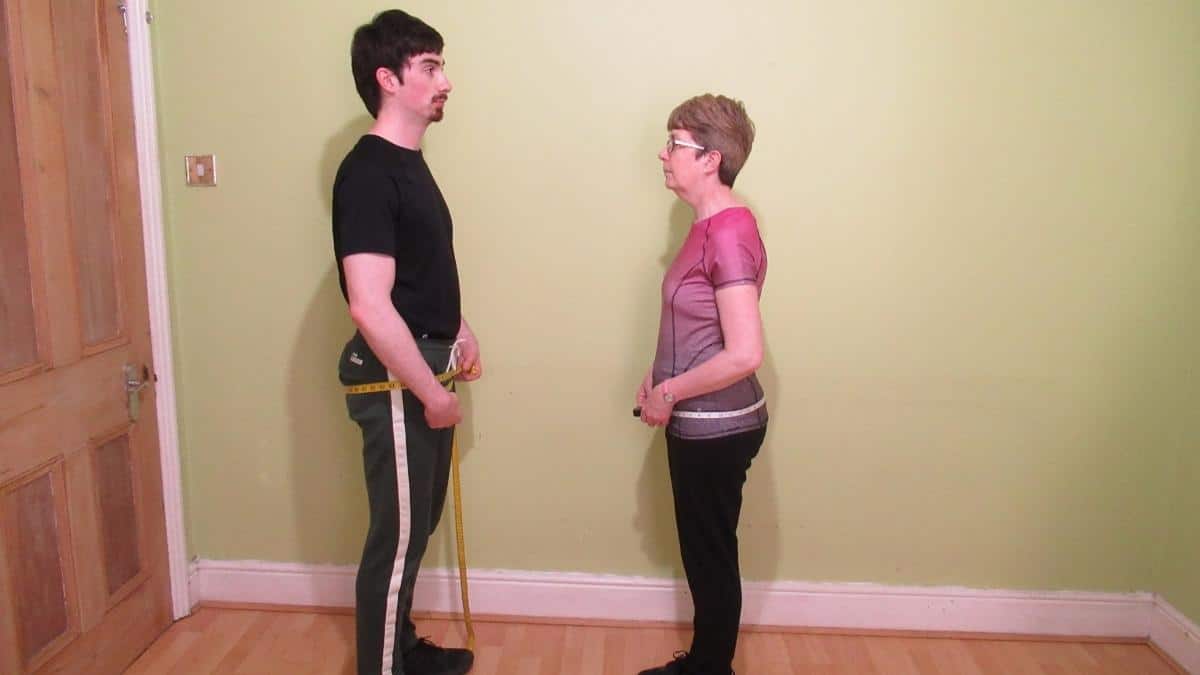 Still, hip circumference tends to correlate better with weight and lean body mass than height. After all, it's quite common to see tall people with slim hips. But you rarely see someone with a high body weight (be it fat or muscle mass) who has really small hips.

Conclusion: Should you aim for a normal hip measurement?

Now that you know the average hip size for women and the average male hip size, you probably have a good idea of how your body compares. So should you aim for a normal hip measurement?

As I'm fond of saying, health isn't measured by the number on the tape measure, but nonetheless, having excessively large hips can indicate that you're overweight or obese.

Yet, large hips—particularly when accompanied by a narrow waist—have also been shown to be protective against various chronic diseases and also increase your perceived attractiveness.

So while having an average hip circumference may well be beneficial, it's not necessarily bad to have hips that are bigger than normal either.