The longest and biggest neck in the world revealed

Find out who has the longest neck in the world and the world's widest neck. 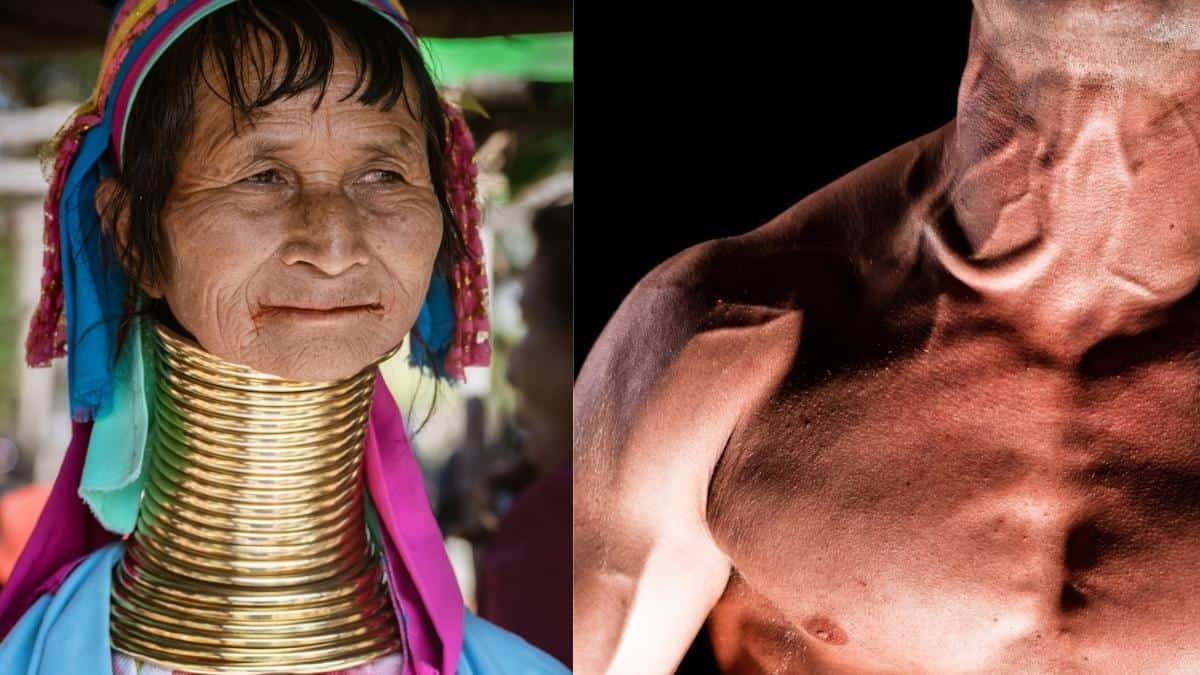 If you're curious about who has the world's longest neck and the world's thickest neck, then you're in the right place. This fun and factual guide will introduce you to some of the most remarkable long-necked human beings from all over the world. Prepare to be amazed!

Who has the longest neck in the world?

These women put brass rings around their neck, which, due to their weight, actually pushes their shoulders down. This gives the illusion of them having really long necks by pushing down on the collarbone and causing some of the thoracic vertebrae bones to move up into the neck, which makes it look longer. [2]

It was once reported that Chinese Teenager (now he'd be an adult) Fu Wengui was the man with the longest neck. This is because he has 10 vertebrae in his neck rather than the usual 7, causing him to have what is perhaps the longest neck ever. [3]

Who has the widest neck in the world?

Who has the widest neck in the world? The man with the thickest neck in the world is IFBB Elite Pro League bodybuilder Rubiel Mosquera. His neck measures a massive 20.5 inches (52 cm) in circumference. This is around 5-6 inches larger than the average human neck size.

Rubiel Mosquera has set the standard for neck size in professional bodybuilding—he surely has the strongest neck in the world as well. However, It's unclear whether the Columbian bodybuilder has a special neck training workout or if he just has a genetically huge neck. Hopefully someone can ask him.

Either way, the only person who comes close to rivaling Mosquera's record-breaking neck is Russian MMA fighter Ashab Tamaev, who reportedly has a 21 inch neck (some sources say 20 inches).

Who has the biggest neck in bodybuilding?

As mentioned, the competitor who currently has the biggest neck in bodybuilding is Rubiel Mosquera—a tape-tearing 20.5 inches.

But another name that's practically synonymous with neck mass is 80s bodybuilder Jeff King. It's been said that King's neck was so thick that it almost looked unreal in his competition photos.

During his career, Jeff King won both the Mr. America and Mr. Universe contests and definitely had one of the most memorable and remarkable physiques that the bodybuilding stage had seen.

Hopefully, more modern bodybuilders will realize that the neck is an important muscle, just like the biceps and abs.

Who has the biggest neck in the NFL?

The football player with the biggest neck in the NFL is former linebacker Takeo Spikes, whose neck measured a massive 21 inches in circumference.

Another linebacker with an incredibly thick neck is Paul Posluszny, who mostly played for the Jacksonville Jaguars.

As you can see, big necks are essential for football players because strong neck muscles can help to prevent concussions. So while people might be marveled at the sheer size of Spikes' and Posluszny's necks, they're not just training their necks for aesthetic reasons; they're doing it to stay safe on the field.

Here are two more people with big necks. Can you guess who made the cut?

Charles Dion Mcdowell became an internet celebrity when his mugshot went viral. His neck is thicker than most bodybuilder necks! It's no wonder that he's achieved lasting fame from a simple picture. [4]

A neck as big as Mcdowell's is undoubtedly a very strong neck, so it's no surprise that Mcdowell (aka "wide neck") participated in a celebrity boxing match, a sport in which having a thick neck can give you more punch resistance, a stronger chin if you will.

Mike Tyson is so well known for his boxing abilities that few people stop to look at his neck. Not only did Iron Mike possess borderline scary knockout power, but he also had an incredible ability to take a punch.

Tyson had arguably the widest neck in boxing history, which, besides making him look intimidating to his opponents, enabled him to absorb punches and resist being knocked out.

The verdict: What is it like having the biggest neck in the world?

As we saw, having the longest neck in the world is due to being part of a tribe with strong ancestral traditions. And even then, the lengthening of the neck is really an illusion.

In terms of having the biggest neck in the world (which is to say the thickest), such a huge neck could be useful for preventing injuries such as concussions, which could occur during contact sports or if you're ever in a car accident.

Of course, having the world's biggest neck may mean getting unwanted attention (on the other hand, a record-breaking neck could launch your career!). For example, there are other articles out there, just like this one, profiling people with the longest and biggest necks.