Forearm handshake: Where did this Spartan/Roman/Viking greeting method come from?

Everything you've ever wanted to know about the famous Spartan handshake... 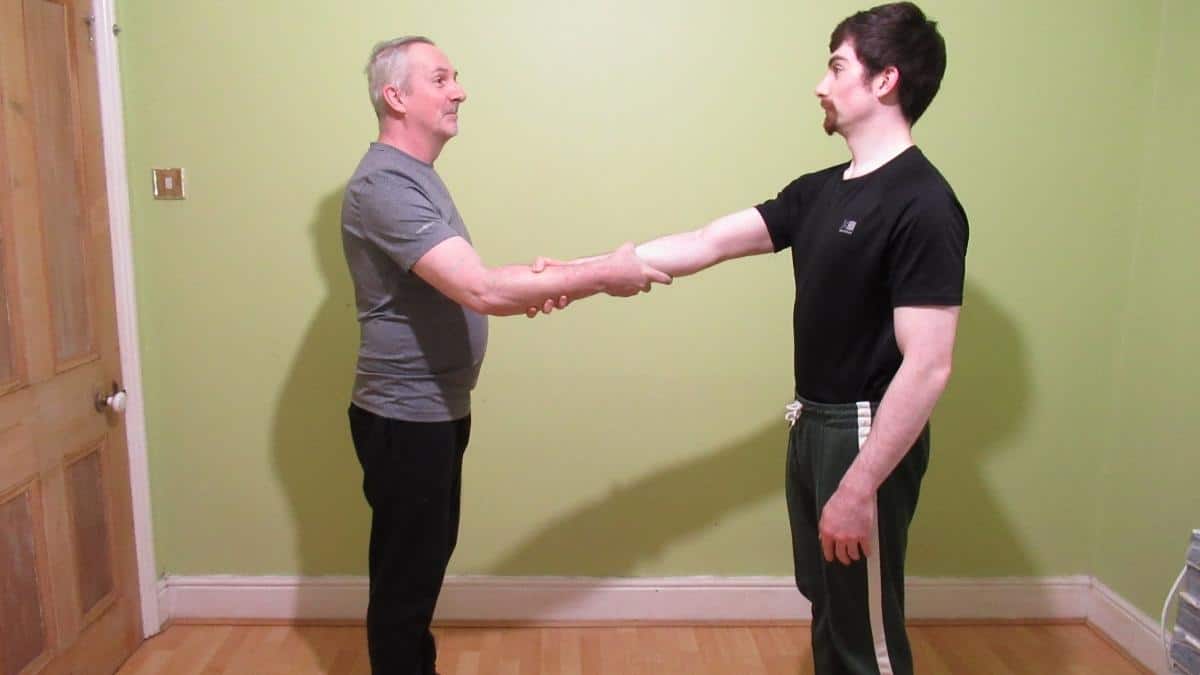 Let’s talk about the forearm handshake. This method of greeting is thought to date back to the beginning of the 5th century BC, and it has many other names such as the Roman handshake, the Spartan handshake, the Viking handshake, and among the overly enthusiastic moderns, the warrior handshake.

I must confess that I wasn’t familiar with this forearm shake until recently. We have tons of articles about the lower arms on our website, and so I couldn't resist digging into the theories surrounding this historical topic when it came up during my research.

I like to think that I’m not the typical meathead, so hopefully, you enjoy this article and learn about the possible origins and reasons for this cool arm handshake.

When did the Spartan handshake come into use?

Some sources say that the forearm handshake came into use at the beginning of the 5th century BC. Others speculate that it was a bit later, citing the 1st century BC as a more likely date.

The reality is that there’s plenty of evidence that normal handshakes existed and were indeed common during Roman times. So it seems as if the association as a “Roman handshake” caught on at a later date, invariably after famous movies and TV shows depicting that era came out.

It’s also worth noting that some images of Roman coins depict the greeting as more of a wrist handshake. This is a crucial fact, and I’ll explain why in just a sec.

It also turns out that Lawrence Alma-Tadema taught the forearm shake to actors over 120 years ago during a reenactment of Shakespeare’s play Julius Caesar. From this point on, the same "warrior handshake” appeared in other versions of the play and indeed on screen in various films and television series.

What does the forearm handshake mean?

Some researchers claim that the forearm handshake came into existence out of necessity. They say that in Roman times, people would grasp the forearm of the other person to check for concealed blades.

But if you look at coins from that era, many people appear to be grabbing the wrist. Perhaps that’s a different handshake altogether. But since hiding a blade up your sleeves doesn’t seem like the smartest place to conceal a weapon, I’m not entirely convinced that this was the reason for the Spartan handshake coming into existence.

It’s possible—but I’m speculating here—that the human hands were seen as unclean due to being used in many, shall we say, unclean tasks. The forearms, however, may have remained clean in comparison to the hands, especially if they were concealed under a garment or armor.

As such, the Vikings, Romans, or whoever, may have just wanted to retain their cleanliness and avoid getting germs from others, which does have some merit to it.

Should we bring back the Roman handshake?

I always think that bringing something back into fashion for the sake of it is strange, especially when we can’t verify the way or reason that the arm handshake came into existence to begin with.

That said, there are definitely some benefits to reimplementing the Viking handshake, or whatever you want to name it, into your dealings with others.

First of all, there’s no need to grab the other person's hand to demonstrate your strength when you perform the forearm handshake since the grab is only meant to be light.

The forearm handshake might prevent the spread of germs. But with widespread access to soap in the modern world, that may not be a good enough reason to bring it back.

Also, it may help to prevent the spread of germs, but considering that most people's hands already have germs—and considering our virtually unlimited access to soup and other such products—this might not be the best reason to bring it back.

The best reason for bringing back the Spartan handshake, however, is because it looks cool.

With the dawn of modern business organizations and all of the drudgery working in such a company entails, bucking the trend and reverting to more primal greeting methods differentiates you from the sea of overly polite business people who shake hands with strangers and colleagues more than they talk to their own family.

What’s the best name for the Spartan handshake?

This is a question that I’ve pondered for a while. And after deliberating with my friends, I think that the best name is the forearm handshake since the technique of the greeting (i.e., grasping the forearm) seems to be more significant than the time period from which it originated.

If you’ve watched a certain TV series, then you might be tempted to call it the Spartan handshake, which is fine. Or if you’re a Viking descendant, then you might call it something different as well.

Either way, please don’t call it a warrior handshake because, as we said, it’s probably not likely that every handshake in Roman times was to seek out concealed weapons.

The verdict on the forearm handshake

Most people seem to call it a Spartan handshake, but as I said, the fact that you’re gripping the forearm means that such a name doesn’t do this greeting justice.

We might find more information about this greeting in the future, and if you do have any more info, then feel free to let me know.