Forearms bigger than your biceps? Here’s why it happens (and what you can do about it)

Now, this is what you call a luxury problem. 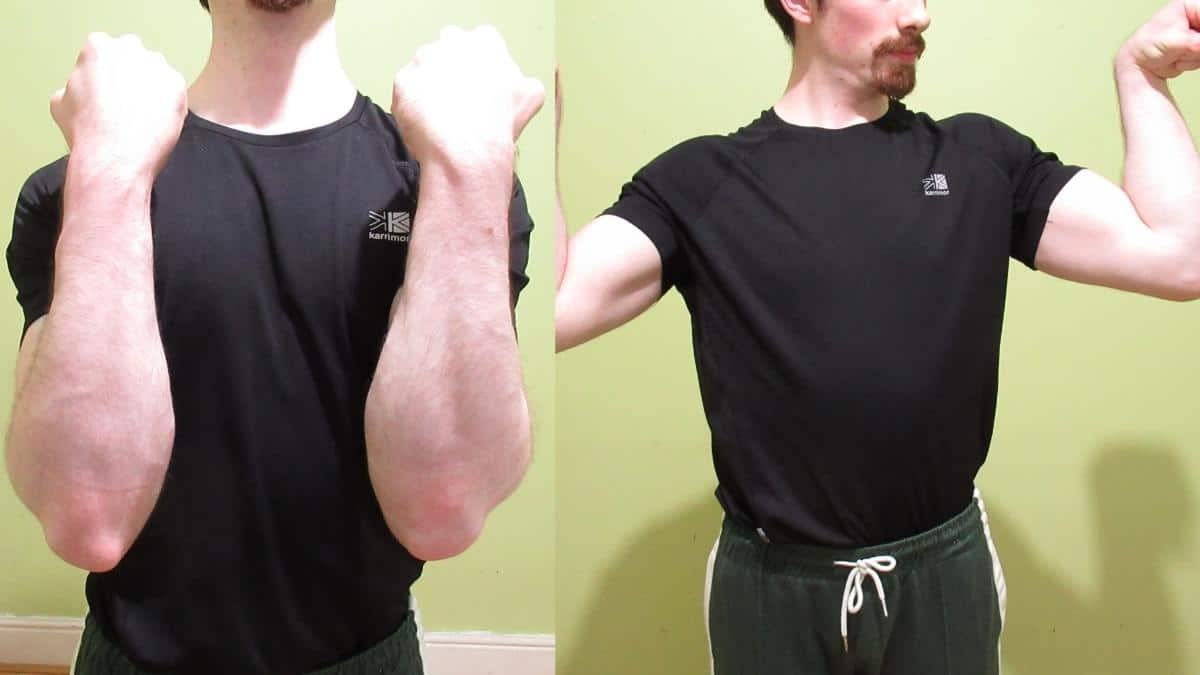 The forearm anatomy consists of a complex set of muscles that have a surprising amount of growth potential (just ask anyone who’s into grip training). As such, a minority of strength trainees can actually end up with forearms that are bigger than their biceps.

But what exactly causes this Popeye forearm phenomenon?

After all, most guys—even those who do direct lower arm training—still have big biceps but small forearms.

Well, the answer, it turns out, might be simpler than you think.

What causes people to have forearms that are bigger than their biceps?

The biceps and forearms are both unique and not unique. They’re special in the sense that there are no other muscles like them. But they’re normal based on the reality that they grow from strength training like any other muscle group.

Therefore, the main reason why you might wind up with forearms bigger than biceps is that you’re simply training your lower arms harder and heavier than your upper arms.

It makes you wonder who has the biggest forearms in the world.

I’d rather have a crushing grip than jacked upper arms. The forearms really are the symbol of primal strength in many ways since we use them to lift virtually all objects. So it’s no surprise that those who perform regular grip work in a serious fashion often have the lower arm size to match dedication levels.

Generally, these people also train their upper arms, which means that their biceps are usually a bit larger in circumference than their lower arms. Still, the difference in size is much less than in the general population, who seem to be getting saddled with increasingly weak forearm muscles as the decades role by. I personally blame the sedentary lifestyle for this “small forearms” problem, but that’s a whole different topic.

Conversely, if someone trains their lower arms directly but not their upper arms, then it’s entirely possible that their forearm size will actually surpass their upper arm circumference.

Whether or not this is desirable is another debate entirely.

If it were me, I’d still want arms that are larger than my forearms (which I do have). But I’d also want forearms that look more imposing than my other muscle groups (working on it).

If you ever needed any proof that a firm grip translates into muscular forearms, [1] then look no further than climbers. These enthusiasts have a rock-solid grip and forearms that are oftentimes more impressive than those of bodybuilders.

I haven’t personally met any climbers who have forearms that are larger than their biceps, but I do know of some who have a much smaller size difference than regular gym folk.

I reckon this is because climbers actually use their biceps a fair bit during their sport, so it makes sense that they’d get enough stimulation to maintain their upper arm's advantage.

If you want to learn how to build forearms that demand attention, pick up a hammer and work for a few hours. Your testosterone will be pumping, and you’ll quickly realize that manual labor is a tremendous all-around occupation for building the forearms.

Again, this is one reason why the younger generation tends to have smaller and weaker forearms than their parents and grandparents. Office work translates very poorly into fitness and muscularity. Of course, you can indeed rectify this by going to the gym after work.

Read more: triceps biceps and forearms workout │forearms before and after

How can you reduce the size difference?

If you have forearms that are larger than your biceps, give these 3 tips a try if you want more proportional arms.

Train your arms too

It’s obvious, but it’s worth mentioning. If you’re not currently lifting weights for your upper arms, then do so.

General strength work like deadlifts and rows build the biceps to an extent, but not as much as direct training, where they’re the main point of muscular failure.

The priority principle in strength training has a lot of merit to it. The exercise or muscle group that you train first in a workout generally receives the most potent growth stimulus because you’re at your freshest and can lift the most weight, do more reps, etc.

If you’d rather not sacrifice your back training, for example, by working your biceps first, then you can simply train your arms on a separate day. If your arms are indeed a weak spot, then simply working them once per week is more than enough to see some serious growth. After all, muscles get bigger outside of the gym when you’re recovering.

Improving your mind-muscle connection goes hand in hand with using the correct form, which I spoke about in my complete guide to forearm hypertrophy.

This is one thing that bodybuilders got right. If you can feel the muscle working, then there’s a good chance that it’ll grow. Those with lagging body parts often have trouble with other muscles taking over during the lift (like their forearms during curls, for example).

So if this is you, lighten the weight and work your way back up with improved form. Your biceps will thank you for it.

Can normal lifters get forearms that are bigger than their biceps?

This really depends on your genetics and your current training status, which is determined on a muscle by muscle basis.

If you’re starting from a completely blank canvas, then you might well be able to get forearms bigger than biceps by prioritizing your lower arms and skipping or minimizing upper arm training.

But for most people who’ve been doing curls since they first hit the gym in their teens, it’s unlikely that they’ll ever surpass their upper arm size in the forearm department unless they abstain from all further training and dial up the forearm specific drills.

Conclusion: Is it even bad to have forearms that are bigger than your biceps?

It certainly isn’t bad to have forearms that are bigger than your biceps. But is it actually desirable?

If your forearms are now so large that they surpass your biceps measurement, then congratulations! You are in an elite club.

All of this said, the ideal scenario for me would be to have well-developed arms that exceed my forearm size, but large forearms nonetheless.