The 10 biggest female biceps in the world revealed (huge peaks!)

Here are 10 women with huge biceps that you won’t forget in a hurry. 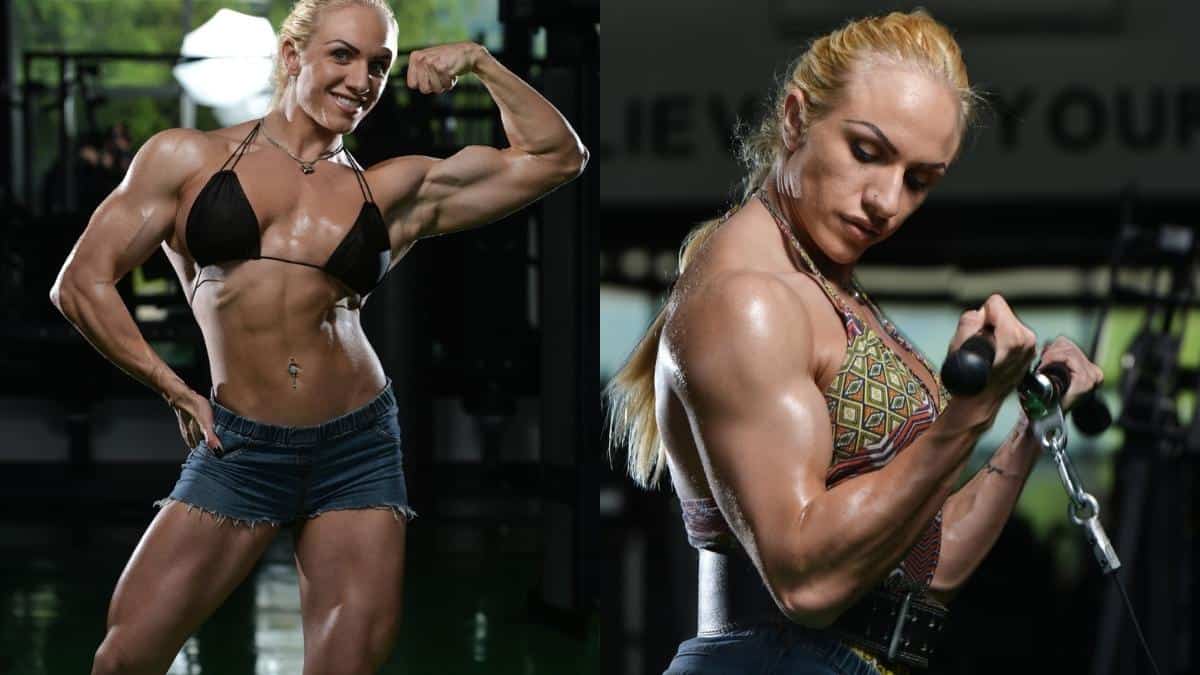 The human biceps muscles are amazing. Some pairs of biceps are peaked and tall, whereas others are long and full. But one thing's for sure; it takes a lot of dedication in the gym to build the biggest biceps in the world.

With the popularity of weight lifting increasing every year, there are now more women with big arms than ever. But who has the biggest female biceps ever?

We dived into the world of female bodybuilding to bring you a massive list of the largest female biceps in the world. So let's see who has the biggest bicep measurement.

There are so many girls with huge biceps nowadays that you could dedicate a whole website to them! While many ladies lift weights to stay fit and healthy, some women are now so strong that they can push heavier poundages than the vast majority of male weight lifters.

With that said, here are 10 pairs of huge female biceps that you won't forget in a hurry.

Weighing a massive 214 lbs of shredded muscle and boasting bulging 20 inch biceps, Renné Toney has the biggest female biceps in the world. [1]

Her huge female biceps peaks undoubtedly help her to smash out sets of curls and pulldowns in the gym, and her titanic triceps make bench pressing heavy weights a piece of cake.

At an above-average height for a woman (she's 5'8″), Toney's sizable frame is built for accumulating show-winning amounts of muscle mass.

Her big biceps may well be her standout body part, but one glance at the rest of her sculpted physique, and you can see that this lady means business in the bodybuilding world.

Weighing over 200 lbs, accomplished Russian bodybuilder and powerlifter Nataliya Kuznetsova is a girl with huge biceps.

Her arms are so big, in fact, that they're bigger than her husband's biceps! [2]

Her supportive husband doesn't mind that Nataliya has bigger arms than him because 'mutual love and support' in their relationship is the most important thing.

Nataliya has been lifting weights for over 15 years and has the strength and physique to back up her efforts; she can bench press more weight (385 lbs) than most people can even hold in their hands. [3]

Nataliya is 5'7"—far from small—but with her imposing physique and huge FBB biceps, you'd be forgiven for thinking that she's at least 6 ft.

The legendary female bodybuilder, Iris Kyle, is a 10-time Ms. Olympia winner and has some of the leanest and biggest female bicep muscles in history. [4]

The separation between her biceps and triceps represents her discipline to sculpt a shredded, show-winning physique, and the sheer size of her upper arms proves that she's got the strength to lift heavy.

In her early days, however, some bodybuilding commentators actually criticized Iris Kyle for being too muscular, which seems like a compliment if you ask me. Anyway, her determination never faded, and she simply came back bigger and better in the following years.

Besides being an accomplished bodybuilder, Iris Kyle is also a successful entrepreneur. She owns Bodi cafe and Powerhouse Gym in Las Vegas with fellow bodybuilder Hidetada Yamagishi. [5]

With tape-tearing 18 inch arms, Aleesha Young is one of those women with huge biceps who demands attention wherever she goes. She reports that people often stare at her when she goes out in public, perhaps wondering how she was able to fit so much ripped mass on her 5'7" frame. [6]

Young started lifting weights at the age of 15 alongside her father, who was also a competitive bodybuilder. Nowadays, Young, who is also a proud mother, has a whole host of bodybuilding titles under her belt, including a first-place finish at the 2019 Chicago Pro Championships.

Obviously, building huge peaked female biceps isn't an easy task. In addition to making the most of her genetics via hard and heavy training, Young also has to lead a disciplined lifestyle at home so that she can maintain her famous conditioning.

Romanian bodybuilder Alina Popa knows a thing or two about the hard work that it takes to build a muscular physique—just look at her big biceps and triceps.

While Alina is thankful for her remarkable mass-building genetics, she doesn't allow her natural talents to let her slip into complacency. She notes that hard work and dedication are crucial for bodybuilding success, traits which she surely used to sculpt her attention-grabbing physique. [7]

Alina is an extremely successful competitor, achieving two second-place Ms. Olympia finishes behind Iris Kyle in 2013 and 2014. Additionally, she won the Rising Phoenix World Championships in 2018.

Alina Popa has been bodybuilding for decades at this point and is a great example of how hard work pays off. She's an online coach and athlete representative at Wings of Strength.

Andrea Shaw won the Ms. Olympia contest in 2020 and 2021 and has some of the best-developed biceps and triceps in the history of female bodybuilding. She stands 5'7" and weighs 170 lbs in peak physical condition.

Shaw, who now trains 14 hours every week, didn't always want to be a bodybuilder. But after gaining confidence and industry experience, Shaw realized that she had potential in the sport and decided to compete. [8]

When you see her physique on stage, it becomes clear that, in addition to her work ethic, Shaw has excellent bodybuilding genetics. Some women can train for years and still not attain the shredded, vascular appearance that characterizes Shaw's physique and, in particular, her arms.

Professional bodybuilder Monique Jones won her IFBB Pro Card in 2010 and has since placed highly in numerous competitions, including a sixth-place finish at the 2020 Ms. Olympia.

Her physique is what you would call a 'complete physique.' In other words, she has no weaknesses because her overall muscle mass makes her frame look very filled out.

Her arms, which boast some of the biggest female bicep peaks ever, are remarkably well developed, and they have incredible leanness and vascularity, no doubt as a result of her dietary discipline and hard work in the weight room.

Helle Trevino has always been athletic and used her sporting background to become a successful female bodybuilder.

Originally from Denmark, Helle Trevino now lives in America and works as a personal trainer at the iconic Gold's Gym. [9]

Margie Marvelous always wanted to build a muscular physique and made her dream a reality when she joined a bodybuilding club in high school.

Margie followed in the footsteps of her father and embarked on a career in the marine corps, where she became a sergeant. [10]

She's competed in the IFBB since 2014 and has achieved some excellent winning and placings. In 2020, she finished runner in the Ms. Olympia contest and secured a 3rd place finish in 2021.

Like the other girls with big biceps in this list, Margie has an enviable combination of mass and conditioning that can only be sculpted through years of consistent training and dietary attention to detail.

It wouldn't be a list of the largest female biceps without Nicole Bass. She was by far the tallest and most heavily-built woman with big arms of her time because she stood 6'2" and weighed 240 lbs.

In addition to competing in bodybuilding, Bass was also a professional wrestler, notably in the WWE.

Bass tragically passed away in 2017 after suffering a heart attack. [11]

Conclusion: Who is the woman with the biggest biceps?

The woman with the biggest biceps (20 inches) is female bodybuilder Renné Toney. She has the most arm mass of any athlete on this list and weighs an incredible 214 lbs while being ripped.

Of course, achieving muscular biceps requires hard, consistent training in the gym, which is the work that most people don't see.

Then, after the muscle is built, these ladies have to diet down to decrease their body fat level and display all of the shredded muscle that they've worked so hard to build. That's the essence of bodybuilding.