Forearm exercises for arm wrestling that will build strength and power

Prepare to crush your next opponent. 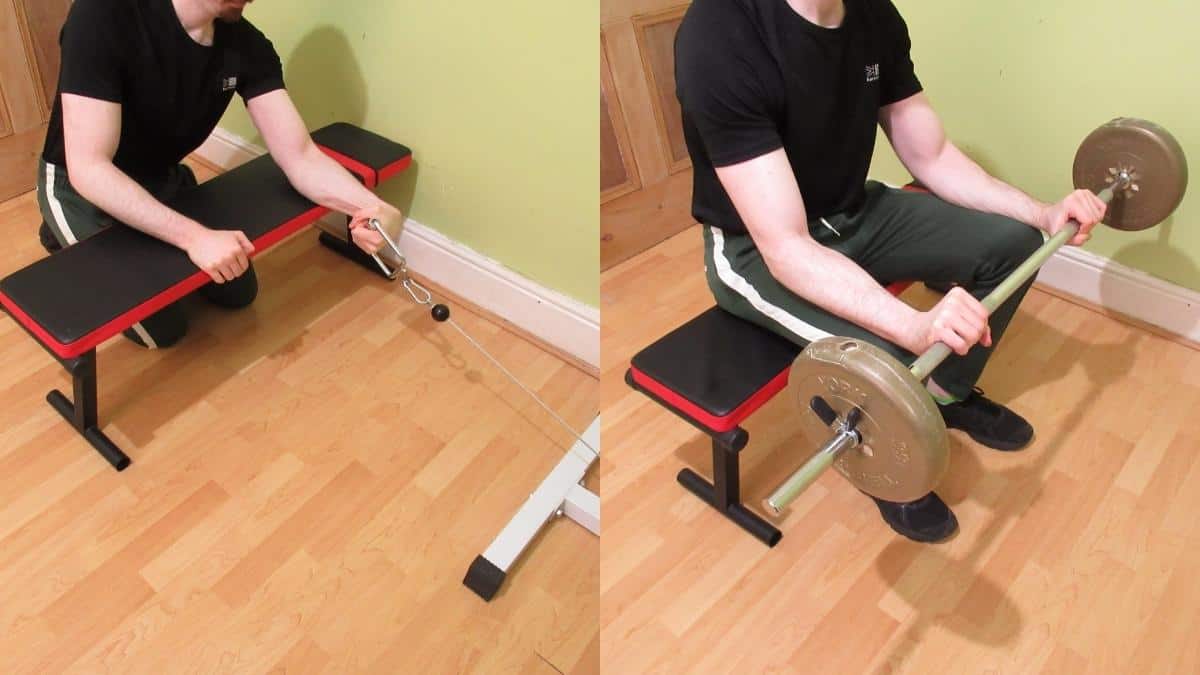 Whether you have long or short forearm bones, you can still be a great arm wrestler if you train harder and smarter than your opponents (or your mates down the pub).

The following forearm exercises for arm wrestling will develop strength in your lower arms, hands, and fingers. These movements will also add some substantial size to your forearms with consistency. So if you're a bodybuilder, then you'll enjoy this article, too.

I’ve also picked exercises that are, in my experience, unlikely to cause wrist pain. After all, if your wrists are sore (rather than your muscles), then you won’t make much arm wrestling progress, even if you have great genetics.

The average wannabe bodybuilder does a few sets of wrist curls (at the end of his workout, of course) and then calls it a day. And then you wonder why he complains about his lack of forearm size and strength—what was he expecting?

Whether you just want those forearm gains or whether you’re a serious arm wrestler, this combination of simple and unique exercises will get you great results.

There are countless cable forearm exercises that you can do. However, the traditional variations where you do curls behind your back aren’t very specific to arm wrestling.

So I invented my own.

If you want an exercise that emphasizes the contraction in your flexors, this is the drill for you. It literally mimics an arm wrestling match, except that your opponent is a very heavy cable pulley.

The importance of the forearm flexors cannot be underestimated in arm wrestling. Yet, if you want to win matches, then you can’t afford to have a weak brachioradialis muscle.

Many arm wrestlers already do reverse curls, but some also mess this exercise up. First of all, always use a thumbless grip. Second, curl the bar past 90 degrees because studies show that brachioradialis activation increases the higher you curl the bar (up to a point).

It’s easy to forget about endurance when you’re in pursuit of superhuman arm wrestling strength. However, as any seasoned competitor knows, disregarding muscular stamina a big mistake.

Endurance alone won’t win you matches, but it will allow your forearms to handle more training (i.e., it improves their work capacity), which in turn will allow you to gain more strength.

Not only does the wrist roller build size, but it’s one of the best forearm exercises for arm wrestling for developing a killer grip.

The one arm dumbbell forearm curl should be a staple in any arm wrestling forearm routine because it very closely mimics the sport itself.

While barbells can also work for building muscle, they don’t let you hone in a particular side of your body and develop that all-important unilateral strength.

Plus, you can do this exercise virtually anywhere as long as you have a dumbbell and a few minutes to spare.

This exercise—reverse wrist curl (barbell)—works the extensors of the forearm. And while it won’t turn you into an arm wrestling champion (only hard work will do that), it will help to balance out your forearms and keep your wrists healthy.

That is, of course, unless you ego lift.

You do not want to lift heavy on this drill. Stick to sets of 15+ reps and start with an empty EZ bar. The point is to just get the extensors moving rather than trying to set new maxes because the extensors don’t have much growth potential compared to the underside of your forearm.

Why an EZ bar?

Because reverse curls are particularly injurious when done incorrectly. Anything that you can do to ease the strain on your wrists is a smart idea.

Before we get into one of the more unique forearm exercises for arm wrestling, I wanted to mention the hammer curl. It’s a common exercise inside and outside of arm wrestling circles, and for good reason.

Not only do hammer curls build muscular biceps, but they also work your brachioradialis. And they work it when your arms are in a neutral position—just like in arm wrestling

I know what you’re thinking. But no, I’m not talking about regular barbell wrist curls that you see ego-lifting bodybuilders do for 3 horrific half-rep sets of 10.

While this drill does use a barbell, we’re using it in a very unique way. I got it from the Voice of Arm Wrestling YouTube channel. Instead of holding the bar in the center, they inserted it into a t-bar row/landmine attachment and then held the end of the bar and did wrist curls that way.

If you’re perceptive, then you might have noticed that the end of the barbell is thicker. So, not only do your flexors get a workout, but you’re simultaneously challenging your gripping and hand muscles because it’s surprisingly taxing to hold an object of this diameter.

Of course, you can also do the regualr barbell version as well if you want to overload your forearms with maximum weight.

How important is the forearm in arm wrestling?

The forearms are very important in arm wrestling because if we view an arm wrestling match as a battle, then your forearm strength is your primary weapon against your opponent.

Of course, there’s much more to arm wrestling than just brute strength. But make no mistake, the forearms are absolutely crucial for becoming a better arm wrestler, both strength-wise and endurance-wise. [1] As such, it’s important to prioritize them in your strength training routine.

Is it better to have long or short forearms for arm wrestling?

I’ve heard a lot of conflicting opinions on this one, and I hate to not give an answer one way or the other, but it really does depend.

For example, the person with the longer forearm will have bigger hands, so they’ll be able to control the positioning more in that sense. They’ll also have more resistance to their opponent's pin.

The disadvantage of having a longer forearm in arm wrestling would be slightly less power in the finish, if my biomechanical knowledge serves me correctly.

Ultimately, as they would say in boxing, styles make fights. Forearms and anatomy, in general, are tools. You need to change your style depending on your opponent and based on the way that they arm wrestle. [2]

Conclusion: Which arm wrestling forearm exercises are the best?

My favorite exercise is the cable curl that I showed you at the beginning of the article. The reason being is that you get constant tension and, in my experience, a more intense contraction than when lifting free weights. Ultimately, it'll help you to generate more power on the pin.

Of course, this exercise is a bit trickier to set up than the free weights ones if you train in the typical commercial gym.

Unilateral forearm drills are ideal for arm wrestling. After all, you don't arm wrestle with two arms.

As for the rest, I almost always recommend training your forearm flexors unilaterally where possible because it matches the sport of arm wrestling much more precisely. [3]

You can train the extensors (with reverse wrist curls) and the brachioradialis (with EZ reverse curls) bilaterally because these muscles aren’t as involved as the flexors in arm wrestling.

If you have any more unique forearm exercises for arm wrestling, then I'd love to hear about them. I’m always looking for ways to get a stronger grip and get the edge over arm wrestling enthusiasts. Thanks for reading.