Should you do half curls for your biceps?

Learn if half curls will really halve your muscle growth. 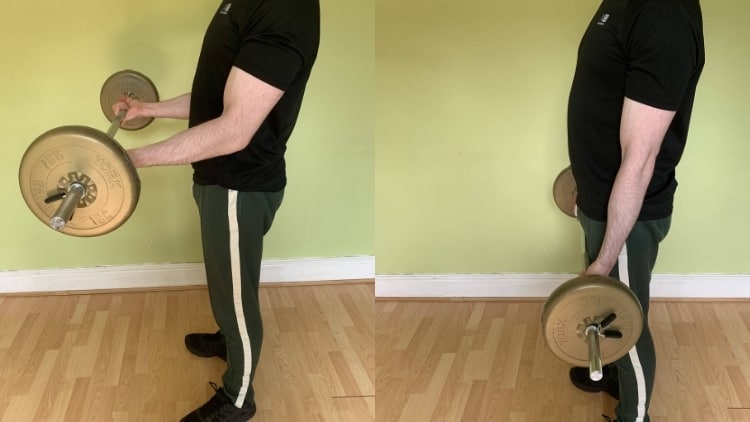 Half curls train the bicep brachii and create an intense muscle pump; there's no denying that. But are they actually worth performing, given that you could just do full range of motion curls instead?

This article discusses the pros and cons of the half bicep curl to see if it's worth your time.

How to perform half curls

To focus on the top half of the curl instead, begin the rep with your elbows just below 90-degrees, curl the bar up until your forearms press right up against your biceps, and then lower it back down to where your elbows are at a 90-degree angle.

Are half bicep curls effective?

They're also effective for honing in on specific regions of the biceps. For example, the long head of the biceps is more active during the initial phase of a curl. So by performing the bottom half of the rep only, you can shift more of the tension onto the outer muscle fibers of your biceps.

However, you could just do 21s on bicep curls to get the best of both worlds. With this approach, you'd get the growth-provoking mechanical tension that full reps provide while simultaneously getting to focus on each head of the biceps.

The short (inner) head of the biceps becomes more active during the top half of a curl, which is to say when your elbows are at a 90-degree angle and above. So if the inner part of your biceps is underdeveloped, then you could throw in some top half curls to bring up the short head.

Likewise, if you find it hard to curl all the way up during regular curls, then doing top half biceps curls can help to ingrain the correct movement pattern into your brain.

Just don't make the half bicep curl a primary arm exercise. It works well as a finishing movement to recruit the remaining muscle fibers at the end of a workout; however, it doesn't stimulate the biceps as much as a full rep curl. [1]

If you want to improve your strength in the contracted position rather than at the top or bottom half of the rep, then you can do iso curls instead.

Bottom half curls emphasize the long (outer) head of the biceps. [2] This is the region that's responsible for creating the bicep peak that so many lifters want to build. So if your biceps already have a firm foundation of mass but lack that height when viewed in a flexed position, then doing some bottom half bicep curls could definitely be worth your time.

On the other hand, you can try eccentric curls if you just need more size and strength in general. Sometimes getting good at the heavy basics is better than performing specialist exercises. You'll always have the chance to focus on the different parts of your biceps as you get more advanced.

The verdict: Is the half bicep curl worth doing?

Half curls have their place if you want to burn out your biceps at the end of a training session or if you want to emphasize a specific head of the muscle. However, they shouldn't be your main exercise because they simply don't provide the same muscle stimulation as full range of motion curls.

Plus, performing half reps can lead to ego lifting, which in turn often leads to a degradation in lifting form and, eventually, injuries.

So do complete reps most of the time but feel free to use the half bicep curl strategically within your program to get a final arm pump or focus on a particular bicep region.

If you're a beginner, on the other hand, then it's recommended to avoid the half curl altogether. You don't want partial reps to become your default practice, so stick to complete reps until you've developed a solid foundation of size.

James Jackson
James Jackson is a personal trainer who uses his expertise in strength and conditioning to create helpful workout tutorials that show fitness enthusiasts how to build muscle while staying safe in the gym. He draws on the latest sports science data as well as tried and tested training techniques to get the best results for his clients without them having to live in the gym.
View All Posts
Bicep Guides