Our preacher curls vs standing curls comparison sheds some much-needed light on the differences between these two popular arm exercises. 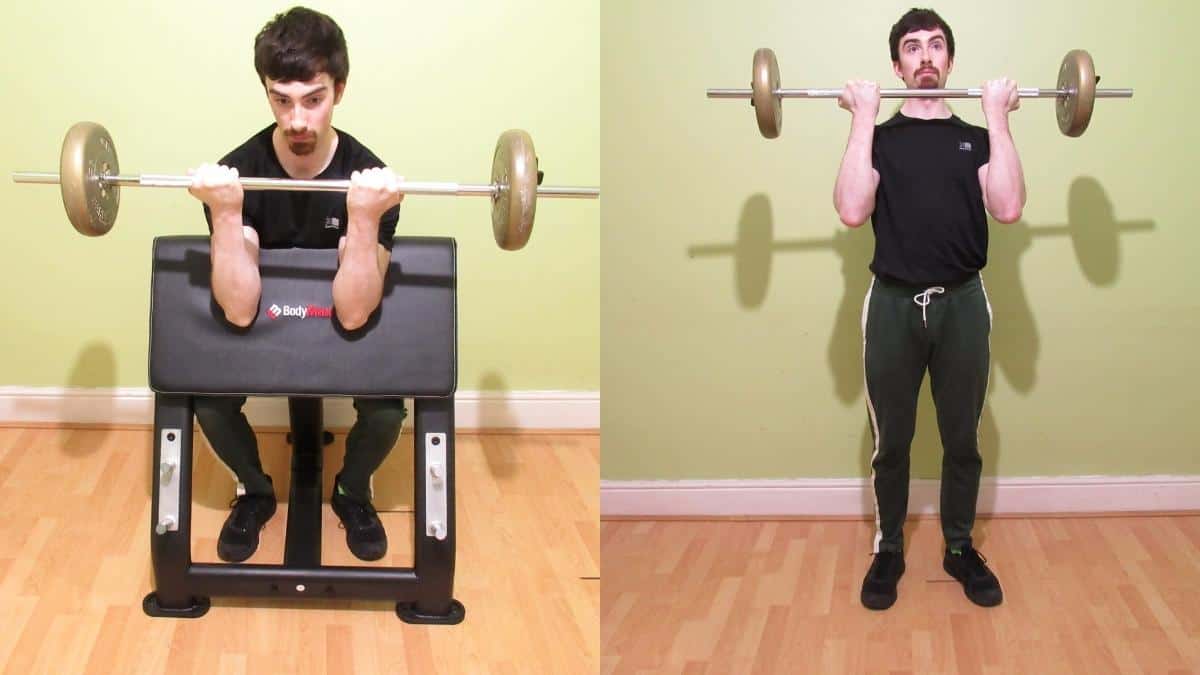 What's the difference between a preacher curl and a bicep curl? And which is best for building the biceps brachii? You'll soon find out!

In this head-to-head comparison, we've pitted regular standing curls against the EZ bar preacher curl to see which exercise is most effective for building bicep muscle and developing strength.

Kicking off the preacher curl vs regular curl debate with muscle activation is important because although both exercises work the same muscle, they emphasize very different parts of the range of motion (ROM).

Due to the sloped angle of the pad, preacher curls are most challenging near full elbow extension, which is to say at the bottom part of the rep. [1] As such, preacher curls provide a better biceps stretch than standing curls.

Regular curls, on the other hand, are most difficult when your biceps are flexed to 90-degrees. Unlike preacher curls, barbell curls exert virtually no tension on the biceps when you lock your elbows out.

Standing curls also work the biceps more evenly, whereas preacher curls emphasize the short (inner) head of the biceps because of the exercise's flexed shoulder position.

In terms of brachialis and brachioradialis activation, things are equal between the exercises because elbow flexion is the only function of those two muscles. In other words, their activation isn't changed by your shoulder position, and so whichever exercise lets you flex your arms most effectively is naturally going to provide the best brachialis and brachioradialis stimulation.

This section is arguably the most crucial part of the preacher curl vs bicep curl debate because virtually every weight lifting enthusiast wants to increase the size of their biceps. So, which is best for getting those gains?

Well, as we just established, even though our two exercises emphasize different regions of the biceps, they still provide relatively similar bicep stimulation, which is another way of saying a similar muscle growth stimulus.

However, preacher curls are easier to perform than biceps curls because the pad helps you to stabilize the weight. Therefore, it's much easier to keep the tension on the target muscles because you can't use your other body parts to cheat the bar up.

Research shows that beginners can experience faster muscle growth from simple exercises because there's less of a learning curve. [2] In other words, the sooner that you can master the technique, the quicker you can get on with building muscle.

So with preacher curls having a more straightforward execution than bicep curls, they're likely also marginally better at isolating your biceps and making them grow. Of course, if you're a seasoned bodybuilder, then you probably mastered the bicep curl years ago, in which case you'll likely experience similar muscle growth from both exercises because you won't need to rely on the preacher pad to maintain the proper form.

As mentioned, preacher curls are easier to perform than standing curls because the pad helps you to stabilize the weight. This means that you can naturally add weight to the preacher bar faster because the technique is easier to learn.

With bicep curls, on the other hand, you'll have to wait longer to increase the resistance because the exercise has a slightly steeper learning curve than preacher curls. So in the short term, you'll definitely gain strength faster by making preacher curls your primary exercise.

Long term, however, there's unlikely to be any difference between the two movements. Once you've nailed the technique, gaining strength comes down to increasing the resistance in manageable increments (microplates are great here) and performing sufficient training volume.

On the other hand, you could actually argue that bicep curls are better than preacher curls for strength gain because it's much easier to cheat the weight up with your back, legs, and hips on barbells curls; hence you can lift more weight in a standing position.

But are your biceps getting stronger when you swing the weight up with your other muscles?

Yes, but probably no more than they would from doing regular curls with good form. Therefore, if we're talking about overall long-term bicep strength, then both exercises will produce comparable results, so just pick your favorite or do both.

Should you perform both exercises?

It's not necessary to perform both exercises because they work the exact same muscle. However, as you learned, regular biceps curls generate a stronger muscle contraction, whereas preacher curls provide a better stretch.

So by working your biceps from different angles like this, you'll also stimulate more significant hypertrophy because you'll naturally be recruiting a wider variety of muscle fibers.

You can check out our concentration curl vs preacher curl comparison as well if you to see another point of reference for the preacher curl.

Which one should you do first?

Most people perform regular biceps curls first because they can typically lift more weight and because the exercise also has a reputation of being a mass-builder.

However, there's nothing wrong with starting your workout with preacher curls. After all, since the lifting technique is so straightforward, they provide just as good if not better biceps isolation than standing curls.

The main reason why you might want to stick with regular curls as your primary exercise is that they require greater core strength, which you'll naturally have more of at the beginning of your session.

If you're training with minimal equipment, however, then you click the link to learn how to do preacher curls without a bench.

As you learned all throughout our preacher curl vs bicep curl comparison, when it's all said and done, both exercises provide a very similar muscle growth stimulus.

The main advantage of preacher curls is that thanks to the pad, they're easier to learn for beginners and better at isolating your biceps. They also require less core strength than standing curls, which makes them an ideal exercise if you're a bodybuilder who wants to hone in on specific muscles.

Regular curls, in contrast, are easier to set up than preacher curls because they require less equipment. Therefore, they're a better choice if you train at home. Similarly, standing curls provide good overall bicep stimulation, whereas preacher curls tend to bias the short head (unless you use a narrow grip) because your arms are in front of your torso when you curl.

Of course, you can certainly perform both exercises. But if you don't have room in your routine or time in your day for two bicep drills, then don't sweat it. In the end, they're about as effective as each other. Focus on the proven basics like progressive overload instead and pick your favorite exercise.