How to do a seated overhead cable extension for your triceps

Here are 4 seated overhead cable extension variations that you can do to grow your triceps. 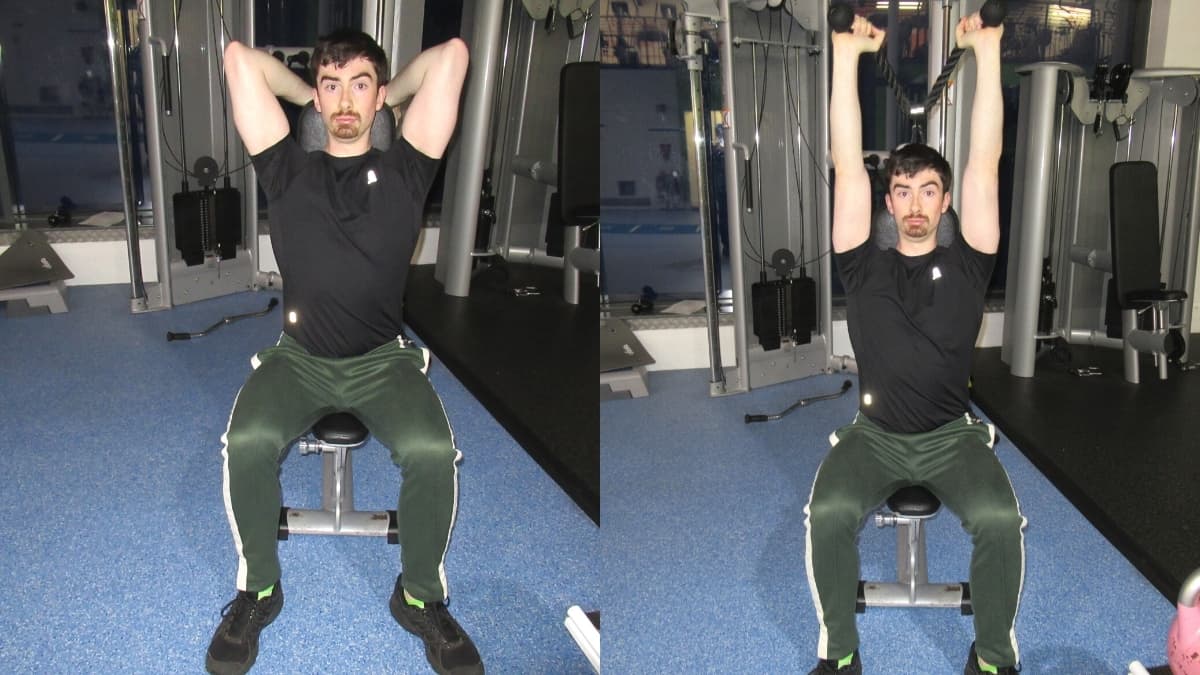 This reduced core stability requirement means that you can focus purely on working your triceps, which is the primary aim of any tricep extension.

How to do a seated cable tricep extension

Just like there are multiple ways to perform an incline cable triceps extension, there are also different ways to do cable tricep extensions sitting down. Learn the benefits and drawbacks of each variation by checking out the exercise demos below.

Seated overhead v bar extensions require less stabilization (from your triceps and shoulders) than the seated rope cable extension because a v-bar is one solid attachment, whereas a rope is split into two distinct sections.

For this reason, you can lift a bit heavier on v-bar extensions. The trade-off is that you can’t “split” the bar at the end of the rep (in order to intensify the peak contraction) like you can with a rope.

Sitting v bar extensions also force your wrists into a predetermined position, which, although neutral in terms of grip, is a fixed position nonetheless and one which might not be comfortable for everyone.

Using a rope, on the other hand, gives your wrists and hands greater freedom of movement, which, besides promoting a more potent peak contraction, helps you to keep the pressure on your joints to a minimum.

Performing seated cable tricep extensions with a bar enables you to lift plenty of weight. But unless the bar has curved, semi-pronated grips, then your wrists might feel strained when you test your strength and lift heavy.

Using an EZ bar, as I alluded to, can combat the wrist strain problem because these bars have semi-pronated grips, which are naturally more comfortable to hold than the nonexistent grips on a straight bar attachment.

Additionally, using any kind of pronated grip (as opposed to a neutral grip) on overhead seated cable extensions usually means that your elbows will flare out more. While some elbow flare is okay, excessive amounts of elbow flare can hurt your joints.

Therefore, it’s recommended to use a rope attachment wherever possible so that you can keep both your shoulders and wrists in a neutral position.

As with the seated barbell overhead tricep extension, you can do the seated cable triceps extension with a reverse grip, which is to say, with a supinated grip.

The advantage of using such a grip for the seated two arm cable tricep extension is that it often encourages lifters to keep their elbows tucked in, which in turn eases the pressure that gets put on their joints.

That’s all fine and dandy. But using a reverse grip doesn’t actually guarantee that your elbows will stay tucked because the triceps muscles don’t act on the wrist. In other words, it’s entirely possible to switch grips without moving your elbows an inch.

Additionally, using a reverse grip means that you can’t push into the bar with the palms of your hands, which in turn limits the amount of resistance you can lift and thereby the overload that you can place on your triceps.

As such, if you have access to a rope, then I recommend sticking with that attachment.

The seated overhead tricep extension is both highly effective and very versatile. In addition to the 4 variations shown in this article, you can also do a seated one arm overhead cable tricep extension if you want to make your triceps as symmetrical as possible.

Performing any kind of seated one arm extension takes longer because, when you train unilaterally, you have to do double the number of sets. But this extra gym time is likely worth the symmetry gains if you’re an advanced lifter because you’ll be able to enhance the aesthetics of your physique even if you’re closing in on your triceps genetic potential.

Of course, you can get similar results by doing the seated cable tricep extension with a rope because you have to lock out each side of the rope independently, which in turn promotes proportional upper arm development.