Learn how to do beginner and advanced variations of the TRX triceps press. 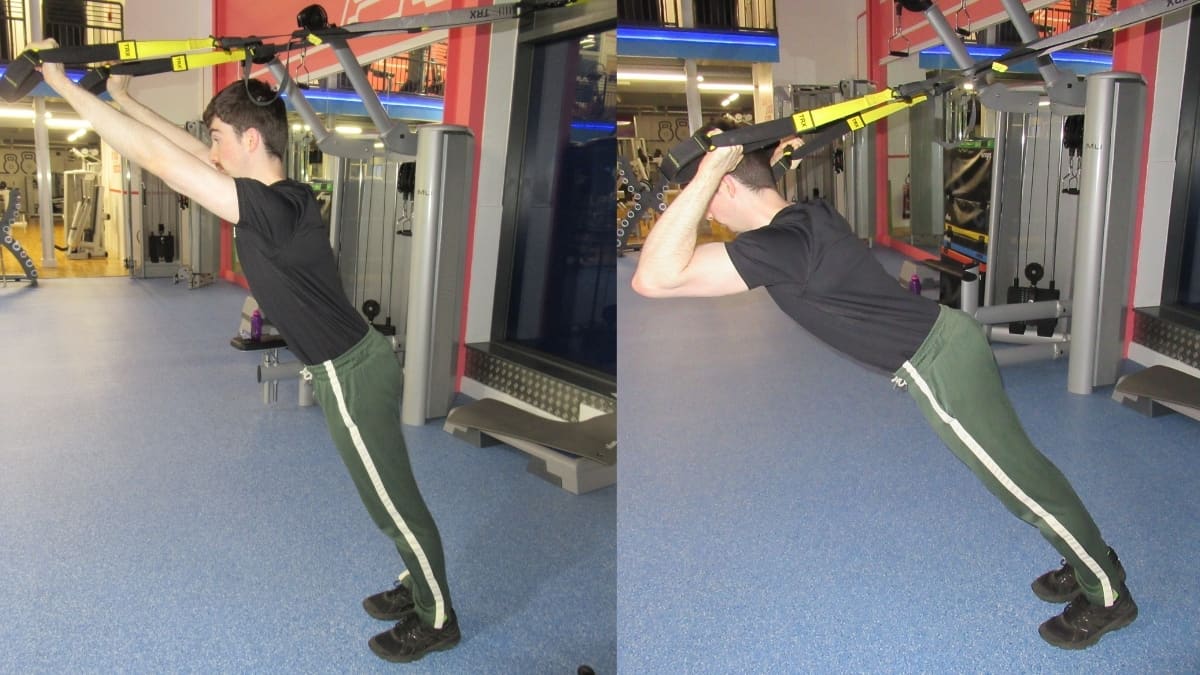 The TRX tricep extension is one of the most effective non-free-weight exercises for strengthening and toning the backs of your arms because the resistance is always relative, which is to say, based on your body weight.

On the other hand, if you’ve been exercising with a suspension trainer for years already, then you can bring the TRX handles behind your head rather than to your face to stretch your triceps even more.

This guide covers the four main variations of the TRX tricep press. After showing you the proper form, we’ll then discuss the benefits that you can realize if you perform the exercise both consistently and with the correct technique.

How to do a TRX triceps extension

Since TRX resistance is always a function of your body weight, you can make the TRX triceps press easier and more accessible by performing it in a kneeling position.

Kneeling down rather than standing up during TRX triceps extensions means that you’re using a lower percentage of your body weight as resistance because an increased proportion of the force is going through your knees (i.e., you’re not pushing all of your weight into the handles).

Similarly, the more upright that your kneeling position is, the easier the exercise will be for your triceps.

The more upright your torso is, the less resistance your triceps have to handle.

Conversely, kneeling down and bending your torso over makes the movement more challenging because now you’re pushing harder into the handles and thus using more of your body weight for resistance.

The technique for the kneeling TRX tricep extension is very similar to that for the standing version.

You simply bend your elbows and lower your head in between the handles. You know that you’ve gone far enough when you feel an intense stretch in the backs of your arms, which will likely be when your forearms and biceps make contact. From there, you just push into the handles (as if you were pressing a barbell away from you) until your elbows are locked out.

The reverse grip TRX tricep press is a good exercise in that it strengthens your triceps and core muscles. However, doing a TRX triceps press with a reverse grip is no better than performing it with a regular overhand grip because triceps activation isn’t affected by your hand or elbow position.

While it’s true that using a reverse grip for the TRX triceps extension may encourage you to keep your elbows tucked in, you can achieve the exact same elbow positioning by using a pronated grip.

Besides the long head of the triceps, which acts on the shoulder joint as well as the elbow (hence why bringing the handles behind your head rather than to your face can be highly beneficial for muscle growth), the triceps muscles are pure elbow extensors.

In other words, using a reverse grip offers no benefit and will likely just make you weaker because your grip on the handles will be less firm. This is because you won’t be able to push into the handles as effectively—a critical form cue that helps you to generate more power—when your palms are facing toward you. Try both grips, and you’ll see what I mean.

For hypertrophy, the TRX French press is the most effective type of TRX tricep press because it trains all three heads of the triceps while giving extra emphasis to the biggest of these three heads, the long head.

The long head is bigger than the lateral and medial heads combined. But unlike those two tricep heads, the long head crosses the shoulder joint and must be trained with overhead work to grow optimally.

In practice, this means bringing the TRX handles behind your head rather than to the sides of your head so that you can put the long head under a greater eccentric stretch.

Extending the range of motion like this increases the difficulty of the exercise, so you may want to perform the movement in a more upright position initially, especially if you’re not used to doing overhead work for your triceps.

TRX tricep extensions hit all three heads of your triceps while strengthening your core in the process. Plus, they can make for a refreshing change in strength training modality if you’ve been lifting free weights for a while.

You can never have enough core strength, especially for bodyweight exercise and TRX training.

That’s one reason why the TRX tricep extension is so effective—it trains your triceps dynamically and your abs and obliques isometrically.

This dual-pronged approach to training encourages you to use your muscles in synergy rather than in isolation.

In turn, this means that even exercises like TRX tricep extensions have excellent carryover to your compound movements such as rows, squats, and presses because they train your core as well as the prime movers.

The triceps account for two-thirds of your upper arm mass. So if you want to make your arms bigger and/or more toned, then you need to perform plenty of exercises that train the triceps.

Having bigger upper arms will not only help you to fill your sleeves and develop more confidence, having big triceps will also enable you to lift more weight during the bench press and shoulder press exercises.

Just make sure that you always lock your elbows out during the TRX triceps extension because elbow extension—locking out your elbow joints, straightening your arms, completing a heavy bench press rep, however you want to say it—is the primary function of the triceps. So it doesn’t make sense to perform constant tension reps for a muscle group like the triceps unless you’re doing metabolite training.

The TRX tricep press, as an elbow extension exercise, hits all three heads of the triceps and is thus excellent for developing overall muscularity.

Building all three heads will make your arms look proportional and balanced. But proportional means that certain heads of your triceps need to be bigger than others.

Since the long head has more growth potential than that of the lateral and medial heads combined, it makes sense to prioritize this (inner) region of your triceps.

The TRX french press is especially effective in this regard because it intensifies the eccentric stretch by extending the range of motion; rather than lowering your face to the handles, you’re bringing the handles behind your head.

This extended range of motion creates more opportunity for muscle fibers to get recruited, which ultimately leads to a stronger hypertrophy stimulus for your triceps.

Conclusion: Who should do tricep extensions with a TRX?

Anyone who wants to develop their triceps in terms of either size or strength (or both) can benefit from doing the TRX tricep extension on a regular basis, around 1-2 times per week.

TRX training is often less intimidating for beginners because, unlike free-weight resistance, suspension trainer resistance is always based on your body weight.

And you can easily manipulate the percentage of your bodyweight that’s used as resistance by changing your foot position (moving your feet closer to the anchor point makes the exercise harder because you’ll be pushing more into the handles with your hands than into the ground with your feet).

Of course, having relative resistance naturally makes the TRX triceps press challenging for stronger lifters as well, especially when you make some of the modifications suggested in the article, like bringing the handles behind your head rather than just to the sides of your head.