Got big triceps but small biceps? These fixes will help

Here are 5 reasons why you have small biceps and big triceps. 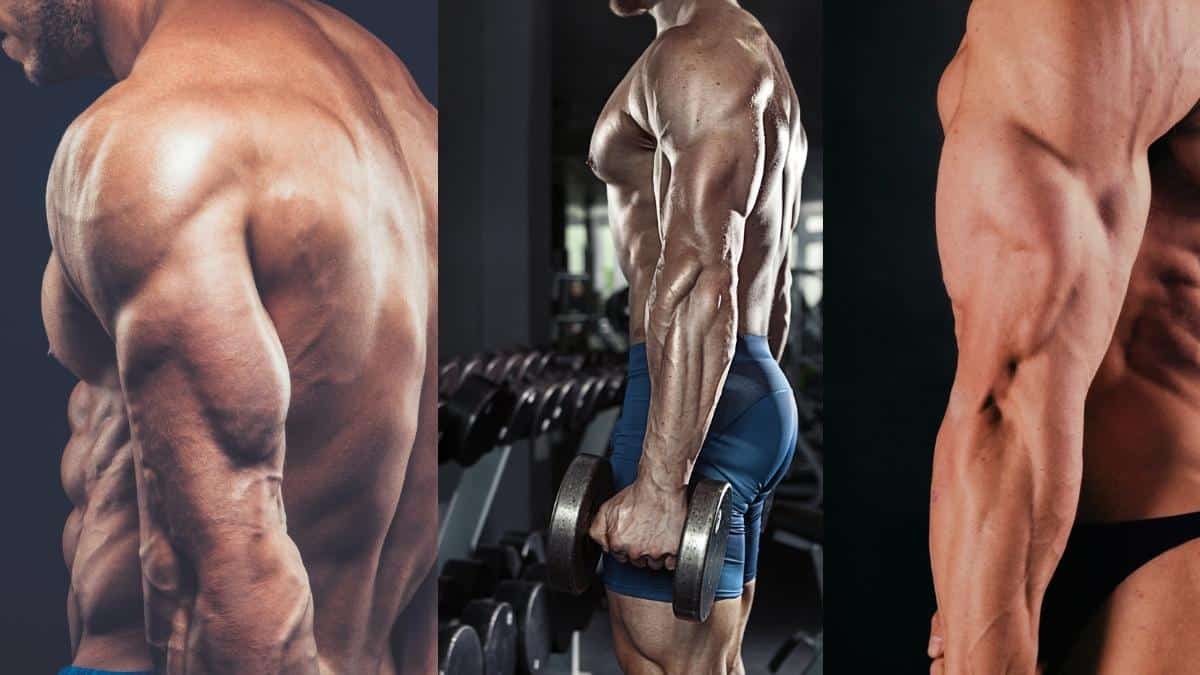 If you have big triceps but small biceps, then you're not alone. Many lifters are frustrated that they have huge triceps but no biceps because it makes their upper arms look completely imbalanced.

Thankfully, the fixes for having small biceps and big triceps are relatively simple. And, if you implement all of the advice, then your results will be more dramatic and even faster.

Table of Contents show
What causes people to have big triceps but small biceps?
High amounts of pressing volume
Powerlifting
Poor bicep curl form
Good tricep genetics
Lack of patience
What should you do if you have small biceps and big triceps?
Master the bicep curl
Perform a wider variety of bicep exercises
Improve your bicep mind-muscle connection
Tone down your tricep training
The verdict: Is it bad to have huge triceps but no biceps?

What causes people to have big triceps but small biceps?

If you have big triceps but no biceps, then there's a high chance that it's due to one or more of the following reasons.

Elbow extension (basically the opposite of a bicep curl) is the primary function of the triceps. Well, did you know that every pressing exercise has a large elbow extension component to it?

Every time you're bench pressing or overhead pressing, you're hammering your triceps with loads of growth-stimulating training volume.

On the other hand, the biceps perform elbow flexion, which, as noted, is the opposite of elbow extension. So anytime you do a row, pulldown, or pull-up, you're working your bicep muscles.

However, the biceps act on the forearm as well. So unless you do your pulling exercises with a supinated grip, your brachialis and brachioradialis will do more of the work.

So even though both your biceps and triceps get worked during compound exercises, presses are more effective for developing the triceps than rows and pulls are for building your biceps.

There's a stereotype that powerlifters do squat, bench, deadlift, and nothing else.

This obviously isn't true, but some powerlifters still rely way too much on compound exercises for building their physiques.

I don't care how strong you are at pull-ups and barbell rows; unless you train your biceps with a supinated grip, they're not going to grow that much.

So, if you're overlooking your biceps because of your commitment to powerlifting, try and do a few sets of curls at the end of your workouts. That might be all you need to stop being all tricep and no bicep.

Lifting weights and working muscles are two different things. Curling heavy dumbbells or barbells is no guarantee of having big biceps if your form is bad.

The more tension that you can put your biceps under in a given rep/set/exercise, the more effective your training is and the more muscle growth you'll stimulate.

With this in mind, try to supinate your wrists as much as you can during dumbbell curls. Supination is, after all, a function of the biceps, so by rotating your wrists away from your body on each rep, you'll naturally be giving your biceps a massive peak contraction.

Also, try to keep your elbows and shoulders still while you're curling so that you don't cheat the weight up with other muscles.

On the other hand, many lifters tend to have good arm genetics in general rather than strong triceps and weak biceps. Still, there's a possibility that you've been blessed with big triceps but cursed with small biceps.

The good news is that with enough effort and patience, you can definitely overcome your lousy bicep genetics and sculpt much more aesthetic arms. More on that in a minute.

There's a reason why many people quit the gym after a few short weeks or months: Real muscle growth takes time to manifest itself.

You need to train your biceps consistently if you want them to grow. Sure, you might be able to speed up your results by curling two or three times per week, but consistency is more important than any other training variable when it comes to building your biceps.

And anyway, if you have small biceps but big triceps, then your biceps might not need much training volume to grow and develop, so it's best off the start with a few sets and then add more sets over the subsequent weeks of your training program.

What should you do if you have small biceps and big triceps?

Just because you have huge triceps and no biceps now doesn't mean that you can't make significant gains in a few months. Here are some training tips that will help you to fix your big triceps small biceps problem.

The bicep curl is one of the most straightforward exercises that you can do in the gym. And yet, so many people use bad form and then wonder why they're all tricep and no bicep!

If you can curl with the proper form, then your biceps will have no choice but to grow because you'll be putting them under so much tension.

I recommend using dumbbells because they allow for maximum supination while ensuring that your biceps grow more or less in proportion.

Essentially, you have two objectives during a curl. First, you want to lift the weights by moving your forearms as near to your biceps as possible while keeping your shoulders and elbows still.

Second, you want to aggressively supinate your wrists so that you can maximally contract your biceps. Think about turning your wrists away from the midline of your body during the second half of the rep. Again, you want to keep your shoulders still as you do this.

Then, during the eccentric phase of the rep, use a slower lifting tempo to really tear down those bicep muscle fibers. Reps, after all, are just a convenient way to measure time under tension, so don't worry about getting fewer reps per set because you'll be challenging your biceps with more tension overall, which is what counts.

Honestly, you could just do standard dumbbell curls and get great bicep gains.

However, if you want to do everything in your power training-wise to build your biceps, then I recommend doing a few different bicep exercises to maximize your results.

This setup ensures that your biceps get worked in both their stretched and contracted position, which helps you to stimulate a wider variety of muscle fibers.

On top of this, I like to do an exercise (dumbbell curls) where my shoulders are in a neutral position, as you can typically overload your biceps with plenty of resistance when your shoulders are in line with your body.

Also, don't forget reverse curls for your brachialis and brachioradialis. These muscles aren't the same thing as the biceps, but they can definitely make the bicep side of your arms look much bigger.

If you have big triceps but no biceps, then there's a decent chance that your mind-muscle connection is weak. If this is the case for you, then I recommend drastically reducing the resistance so that you can actually feel your biceps doing the lifting.

If you have a good bicep mind-muscle connection, then you should feel your biceps knotting up and contracting intensely on every single rep that you perform.

You're better off lightening the weight now and then gaining real bicep strength than you are throwing around heavy weights with no real mind-muscle connection.

Remember, lifting weights and training muscles are not the same thing. This is especially true for isolation exercises. You need to feel the target muscle for the movement to be in any way effective.

Tone down your tricep training

Another way to fix your small biceps big triceps problem is to simply tone down your tricep training. This will give your biceps a chance to catch up, which will make your upper arms look more balanced.

You can likely maintain your tricep gains with compound presses and one exercise for the long head (such as skull crushers or overhead extensions).

Of course, if you're into bodybuilding, then it can be hard to purposely hold back on your training. So if it were me, I'd just carry on training my triceps as normal and trust that my biceps will catch up when I improve my form and gain strength.

Unless you have the biggest triceps in the world and really small biceps, then it might not be worth purposely limiting yourself during your tricep training sessions.

Working biceps and triceps together in an arm workout is another great way to give your biceps more attention because you can train them when they're fresh (rather than at the end of a back workout, for example).

The verdict: Is it bad to have huge triceps but no biceps?

On the other hand, having huge triceps and small biceps can make your arms look unbalanced, which can definitely be a problem if you're a competitive bodybuilder or physique athlete.

Still, with enough patience and dedication, pretty much anyone can correct—or at the very least improve—their strong triceps weak biceps problem.