Here are the top 10 bodybuilders with the largest calves in the world. 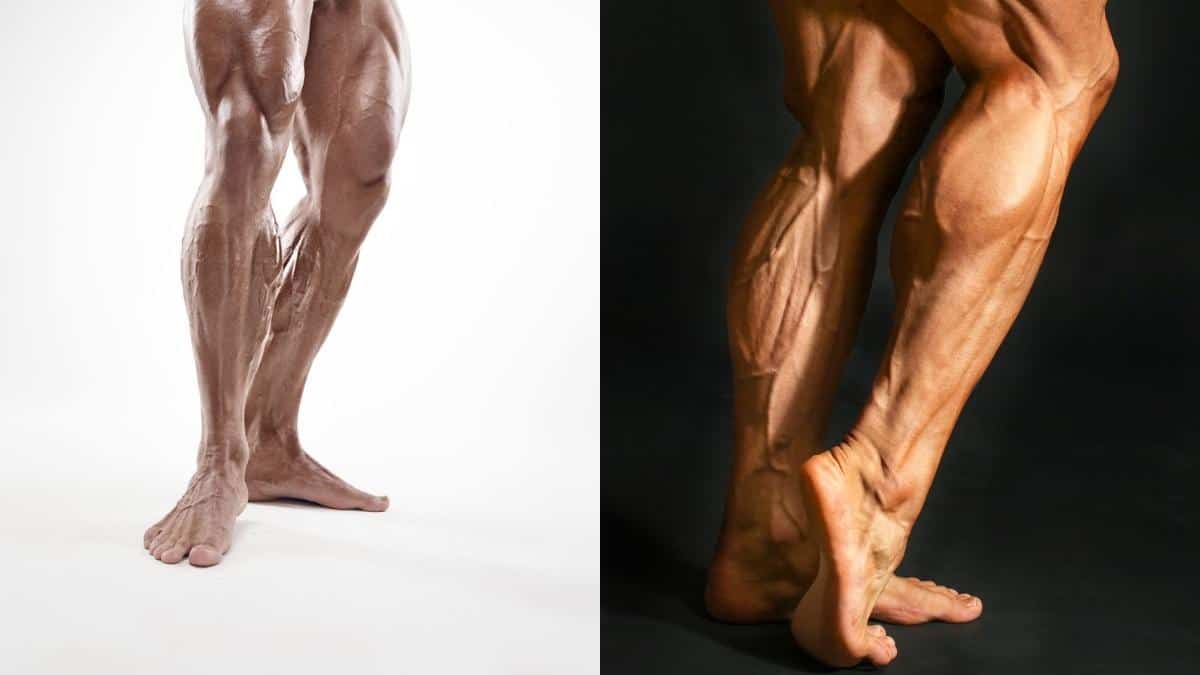 While the average lifter may only be able to achieve a normal calf circumference, there are plenty of bodybuilders and strength athletes who have truly insane calves.

In addition to showing you who has the biggest calves in the world, this guide also gives you a rundown of the top 10 best calves in bodybuilding history.

Who has the biggest calves in the world?

Who has the largest calves in the world?

The man with the biggest calves in the world is American bodybuilder Erik Fankhouser. His calves, at least when he was competing—they're still huge now—measured a colossal 24 inches while being ripped at the same time.

Fankhouser was well-known for his outstanding lower body development, and his calves were certainly the biggest and the best to ever grace a Mr. Olympia stage (or any bodybuilding stage, for that matter).

Some commentators have even said that Fankhouser's calves were too big. But in the sport of bodybuilding, you're always better off being "too big" than not big enough, especially when it comes to a notoriously stubborn muscle group like the calves.

Who has the best calves in bodybuilding?

Who has the best calves in bodybuilding history?

In terms of overall mass, Erik Fankhouser certainly has the largest calves (although Ben Pakulski isn't far behind).

But as for who has the best calves ever, that's down to your personal opinion.

Mike Matarazzo had some of the freakiest and most aesthetic calves ever—his calves were cut like diamonds—even if they didn't quite have the same level of mass as those of more modern bodybuilders like Fankhouser and Pakulski.

Who has the biggest natural calves?

Oftentimes, the people with the biggest natural calves are those who have developed their calves unintentionally, which is to say without direct training.

Overweight and obese individuals are prime examples. If you take a heavily built person and get them to walk around for prolonged periods of time, then their calves will actually get a pretty good muscle-building workout.

Add in the calorie surplus that you obviously need to become overweight, and you can see why many non-lifters have some of the best natural calf development that you'll ever see.

In terms of the natural calves that have been built through resistance training, natural bodybuilder Jeff Alberts has noticeably good calf development [1] (his transformation is very impressive), as does 6x Natural Mr. Olympia champion Kiyoshi Moody. [2]

Who has the strongest calves?

Strongman Eddie Hall has massive 23.5 inch calves. Hall's colossal lower legs are easily some of the strongest calves in the world because they're capable of stabilizing his body while he squats 300kg for reps. [3]

The crazy part is that Eddie Hall doesn't do much direct training for his calves, and yet they're bigger than most men's quads.

I suppose when you're squatting 3x more weight than most people and supporting a 150kg + physique at all times of the day, your calves have to perform a lot of work whether they want to or not!

The top 10 biggest calves in bodybuilding

Discover the mass monsters who built some of the biggest calves in bodybuilding history.

If there's ever a man with insane calves, it's Erik Fankhouser. At a tape-tearing 24 inches, this IFBB Pro definitely has the biggest calf muscles in the world.

Even Mr. Olympia champions and bodybuilding legends like Ronnie Coleman and Jay Cutler couldn't rival Fankhouser in the calf department.

Fankhouser was a big fan of doing his calf raises on the leg press. This makes perfect sense from a hypertrophy perspective because there's less pressure on your back during a calf press than during a calf raise.

Although some people have said that Fankhouser's calves were too big, most bodybuilders get criticized for having calves that are too small. So having overly dominant calves is definitely a luxury problem that many pro bodybuilders would love to have.

Like Erik Fankhouser, Ben Pakulski has some of the biggest calf muscles in the world. Pakulski appears to get his incredible calf size from his father, who, according to a Muscular Development article, has 22 inch calves himself! [4]

Pakulski has made numerous videos stressing how vital proper execution is when it comes to building the calves.

Unlike other bodybuilders who train hard but not smart, Pakulski makes every calf raise count by challenging his calves with a deep, growth-stimulating stretch and a pump-inducing peak contraction.

When it comes to growing the calves, there's no one better to learn from than Ben Pakulski because he has both the physique and the knowledge.

Mike Matarazzo had a remarkable amount of overall mass, but it was his calves that were particularly eye-catching.

A former boxer, Matarazzo credited a lot of his calf development to his boxing training, where he constantly had to be on his toes to predict his opponent's next move. [5]

Matarazzo was a big believer in using the proper form to grow your calves, something that he clearly prioritized in his own training.

However, his lower leg development is also a testament to the fact that simply spending a lot of time on your feet and, in particular, on your toes can work wonders for your calf size.

When he was competing, Dorian Yates had some of the world's biggest calves—and they looked massive from every angle.

Yet, even though he's long retired, the 6-time Mr. Olympia winner still has larger calves today than many professional bodybuilders. This may not be all that surprising, seeing as bodybuilder calf muscularity actually appears to be decreasing somewhat in recent times.

Despite his lower legs already dwarfing those of his opponents, Yates was a master at posing his calves to make them look big and full from every angle.

While many bodybuilders recommend training your calves more frequently in order to bring them up, Yates actually advises training them roughly once a week. [6] After all, the calves are like any other muscle group in that they need time to recover in order to grow.

When you think of "mass monster," Nasser El Sonbaty, who weighed over 300 lbs in the off-season, inevitably comes to mind.

Although Nasser never won a Mr. Olympia contest, he did finish second in 1997 and had countless other high-place finishes throughout his 15-year professional career.

Nasser noted in an interview that he's always had good leg development, calves included. [7] The inner head of his calves stood out the most and really gave him an edge in the leg department over his fellow bodybuilders.

His bulging calves measured over 20 inches, and unlike a lot of his competitors, Nasser's sweeping, chiseled quads were in proportion to calves.

You'll never find a photo of Flex Lewis where his calves are lacking in size or detail.

Flex Lewis easily has some of the biggest bodybuilder calves of all time and most definitely some of the largest of his era, something which is made even more impressive by the fact that he's naturally a 212 competitor.

While many pro bodybuilders had to fight tooth and nail to bring up their calves, Flex Lewis had great calves from his very first show. In fact, there's a picture of him at the age of 19 in which his calves look developed enough to compete on the current Mr. Olympia stage.

For a bodybuilder of his weight, though he is far from small in terms of muscularity, Flex Lewis has the largest calves in the world today. The competitors with bigger calves than Flex (and there's not many) weigh a lot more.

Although he's only 5 foot 4, Lee Priest weighed well over 200 lbs and had the calf mass to match the rest of his famous physique.

Priest’s calves we so developed that it looked like the inner heads of his calves would bang into each other on stage if he made them any bigger. Seriously, his inner head was the single biggest calf muscle that I've ever seen!

Unlike other bodybuilders, Lee Priest didn't just have one big lump of calf mass; he had (and still has) incredible vascularity and muscle separation too.

Priest notes that although he built his calves with weighted standing calf raises and calf raises on the leg press, high rep bodyweight calf raises are also a viable strategy to grow your lower legs.

They're particularly effective for people who tend to skip calf training because all you need to do bodyweight calf raises is a step and a spare 5-10 minutes.

It's impossible to talk about the legs without mentioning Tom Platz.

While Platz was most famous for his unrivaled quad development, his lower legs were also exceptionally well-developed.

His calf training was also unconventional, to say the least.

In an interview with Old School Labs, Platz notes that in addition to performing high rep calf training, he'd pile as many plates as possible onto his specially made calf raise machine (often over 1000 lbs) and hold the contraction for as long as possible.

This makes sense, considering that your calves are already used to supporting low levels of resistance (i.e., your bodyweight) throughout the entire day. So if you really want to get bodybuilder calves like Tom Platz, you need to blast your lower legs with a different kind of stimulus, which is to say with heavy, fiber-tearing weight.

Considering that he's a tall bodybuilder, Steve Kuclo has some of the biggest calves for a man his height (5'11").

Kuclo's calves look wide and detailed from the back and carry plenty of mass from the front. You can really see the separation between the inner and outer heads of his calves in the video above.

Crucially, Kuclo notes that you should keep your feet straight while doing calf raises because it's the most natural position for the feet. In other words, you're likely to have an easier time feeling your calves working if you avoid pointing your toes in or out.

In his Muscle and Strength workout walkthrough, Kuclo also emphasizes the importance of pausing in both the stretched and contracted position when doing calf presses. [8] This way, you eliminate momentum from the movement and ensure that your calves are getting all of the muscle-building tension.

At the height of 6'1", Paul Dillett is considerably taller than the vast majority of bodybuilders.

And despite many taller lifters struggling to build their calves, calf development is something that Paul Dillett never lacked.

Dillet's best Olympia placing was 4th in 1994, a contest in which he beat fellow big calf bodybuilder Nasser El Sonbaty.

The verdict: How did these bodybuilders sculpt some of the biggest calves ever?

Even though many of these bodybuilders are genetically blessed in the calf department, building the biggest calves in the world takes a lot more than good genetics.

All of the bodybuilders in this list had to train for over a decade to get their eye-popping calves.

While having the right genetics certainly gives you a head start, it takes consistent work in the gym to make the most of your natural talents.