Who has the biggest legs in bodybuilding history? (Top 10 biggest quads and thighs ever!)

Quads for days: Discover the top 10 biggest thighs in the world. 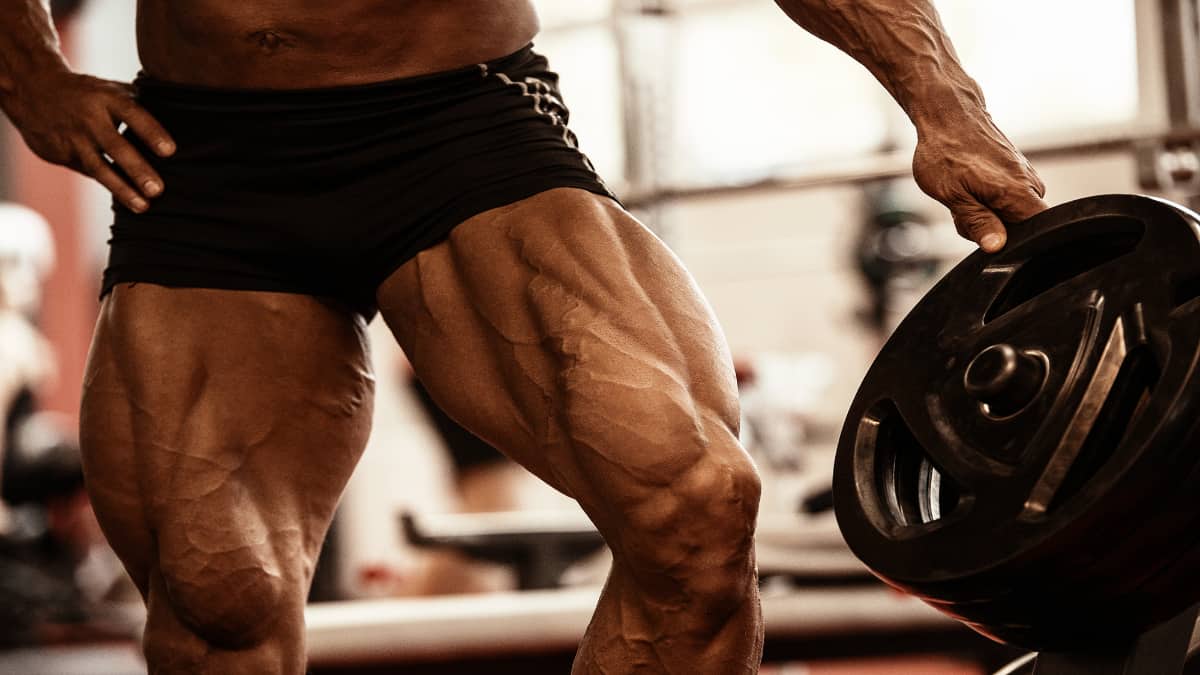 If you want to know who has the biggest legs in bodybuilding history and in the world today, this guide is for you.

In addition to learning who has the best legs in bodybuilding, you'll also see the top 10 mass monsters with the biggest quads ever.

You can also learn the average thigh circumference to see how your quads compare.

Who has the biggest thighs in the world?

Who has the biggest thighs in the world today? The man with the world's biggest thighs—a jaw-dropping 36 inches in circumference—is professional bodybuilder Mamdouh Elssbiay, who is better known as Big Ramy.

Big Ramy has the biggest thighs in bodybuilding by a country mile, considering that his legs are bigger than many men's waists. His quads are so big and bulky, in fact, that it almost looks like his posing pictures are photoshopped.

Who has the biggest legs in bodybuilding history?

Once again, the athlete with the biggest legs in bodybuilding history is definitely Egyptian bodybuilder Mamdouh Elssbiay, who goes by the fitting name of Big Ramy. While Ramy may not have the leanest legs or the most detailed thighs, he definitely has the biggest quads in the world at a colossal 36 inches.

Who has the best legs in bodybuilding?

Who has the strongest legs in the world?

According to the record books, the man with the strongest legs in the world is powerlifter Vlad Alhazov. The reason that Alhazov has the strongest leg muscles is that he can raw squat more weight than anyone else—an astonishing 525 kg (1157 lbs).

Although this top 10 list takes into account all of the lower body muscles—quadriceps, hamstrings, glutes, calves, adductors—it mainly focuses on the thighs in general, and the quads in particular since the quads are arguably the most important leg muscle in professional bodybuilding.

Big Ramy has the largest quads of any professional bodybuilder, strength athlete, or human. If you weren't into bodybuilding, then you'd be forgiven for thinking that Ramy's legs were photoshopped.

But such a statement flies in the face of Big Ramy's dedication in the gym. While his legs are obviously genetically blessed to an extent, Ramy still trains his legs exceptionally hard and heavy, noting that high reps especially work wonders for building the quads. [1]

On the other hand, some bodybuilding commentators have expressed their belief that Ramy's quads are actually too big and thus make his upper body (and especially his calves) look smaller than it is.

But in the sport of bodybuilding, having too much mass is definitely a luxury problem. Shows are not lost because your quads are too big; they're lost because you didn't have the combination of size, symmetry, detail, etc.

The quads of Tom Platz lacked nothing.

In addition to measuring a tape-tearing 30 inches, Platz's thighs and adductors had so much separation and detail that you'd be forgiven for thinking that the quadriceps were a 12-headed muscle.

Platz was known for his incredible training intensity, which included feats as impressive as a 500 lb squat...for 23 reps. How many current Olympia competitors could do that?

Unlike some of the other quadzillas on this list, Platz also had show-winning hamstrings, great glutes, and very impressive calves.

While Platz's quads weren’t quite as big as Ramy's, he arguably has the best quads in bodybuilding history when you factor in their symmetry, separation, and proportion to his other leg muscles.

According to online sources, Ronnie Coleman's legs were as big as Big Ramy's—a mammoth 36 inches. [2]

When you add in his show-winning quad vascularity and impressively etched-out thigh striations, you can see why the 8-time Mr. Olympia is a top 3 contender for the best legs in bodybuilding.

Unlike some of the other athletes in this list, Coleman's legs weren’t overly dominant, either. Coleman's upper body was so massive that even though he had some of the largest thighs ever recorded, his legs didn't dwarf the likes of his chest and back one bit.

Coleman was also known for his incredible feats of leg strength. He could squat 800 lbs and do leg presses with more than 2000 lbs, so his impressive quads certainly weren't just for show.

Kai Greene has some of the most unique and distinct quads in bodybuilding; even if you saw his quads among 100 other pairs, you'd still be able to see his sliced-and-diced quad sweep without any trouble.

His quads measure 33 inches around and are the product of many years of perfectly-executed leg workouts. [3]

That's right; you'll never see The Predator half repping on the leg press or sacrificing his form to set new PRs.

As a bodybuilder, Kai Greene controls the weights and uses them as if he's a sculptor chiseling away at a block of wood trying to sculpt the perfect lower body.

The average bodybuilder would do just about anything to have legs like Ben Pakulski.

In his prime, Ben Pakulski had some of the biggest bodybuilder legs of his era—and perhaps the most detailed pair of quads on stage.

In addition to his incredible lower body genetics, Pakulski is renowned for his thoughtful, scientific approach to training, something which undoubtedly helped him to bring up his upper body towards the end of his career, which used to lack far behind his legs.

If this list was purely about the calves, Pakulski would be in the top 3 for sure, considering that his calves are bigger than some people's thighs.

If you want to see some of the most vascular, detailed, and yet truly massive quads, then look no further than Branch Warren's gargantuan thighs.

Branch had crazy calves and huge hamstrings, too, but it was his quads that really stole the show.

And that's not a surprise considering the intensity of his leg workouts. In order to sculpt his huge bodybuilder quads, Branch Warren typically performs 30-40 rep leg extensions at the start of every lower body workout. [4]

This shows just how well the quads respond to high rep, high volume training that's taken close to failure (if anyone trains intensely, it's Branch Warren).

Paul DeMayo is one of the only bodybuilders who competed in the 80s and 90s to make it onto this list—and for good reason. [5]

DeMayo's quads had one of the most impressive sweeps of a professional bodybuilder. His outer thighs were so big that they practically looked swollen. In this sense, DeMayo's quads were very similar to those of current competitor Big Ramy.

Paul DeMayo had some of the freakiest bodybuilder thighs of his era, and yet his physique didn't lose its aesthetic appeal.

His teardrop muscle, which is known as the vastus medialis, was absolutely eye-popping and looked like a full 4-headed quadriceps muscle by itself.

And then there's his outer sweep. While Cutler didn't have the biggest quad sweep ever, he certainly had some of the most separated and detailed quads that the sport of bodybuilding has ever seen.

Cutler always had big legs, but it was his meticulous approach to leg training that really sculpted his show-winning legs. Performing 30 sets or more per session wasn't uncommon for Jay Culter—and each of those expertly-executed sets was always with a highly specific purpose in mind. [6]

In his prime, former professional bodybuilder Mustafa Mohammad had some of the biggest body builder legs to ever walk the Olympia stage.

Although he has downsized considerably since his competition days, Mohammad had undeniably colossal quads.

While his legs weren't the most conditioned, he always brought plenty of mass to the stage. In his stage pictures, you can see that his huge adductors were fighting each other for breathing room!

Mustafa Mohammad's teardrop actually had great definition in addition to masses of muscle tissue; it's just a shame that his outer sweep was often less defined.

In the calf department, nobody can rival Erik Fankhouser—not even Mr. Olympia winners.

Yet, Erik Fankhouser had massive legs as a whole, not just eye-popping calves.

His quads, for example, had so much meat on them that they looked freakishly big.

You'll also notice that, unlike many bodybuilders, Fankhouser's legs didn't have overly dominant adductors, which made his quad sweep look even more compelling.

Conclusion: Who really has the best quads in bodybuilding?

In terms of overall mass and sheer size, Big Ramy obviously has the biggest legs in bodybuilding today and in the history of the sport. But bigger isn't necessarily better when you consider the fact that bodybuilding is also about symmetry, shape, and definition.

In agreement with a number of bodybuilding experts and commentators, the man with the best legs in bodybuilding has to be Tom Platz because he had the size and the show-winning separation.

Also, while Platz certainly had some of the biggest quads ever seen on stage, his thighs didn't overpower his calves, glutes, and hamstrings, which were all highly developed in their own right.