How to do a cable cross tricep extension correctly 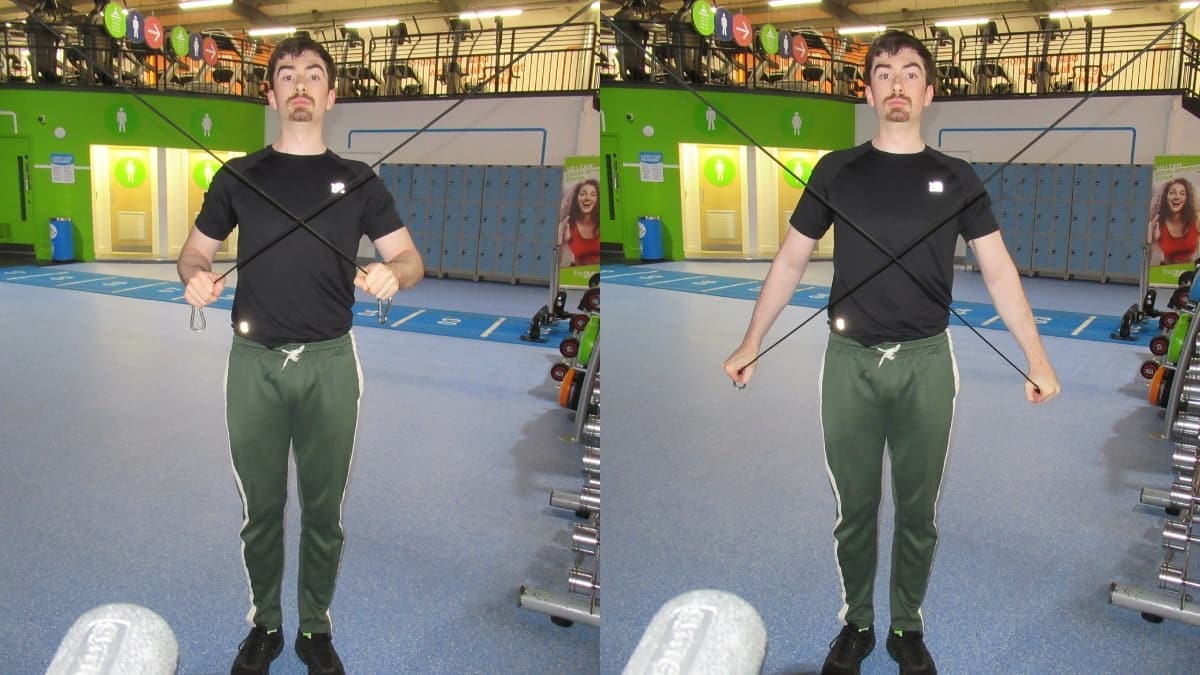 One of the most interesting (and most important) triceps facts revolves around the long head of the triceps, which is the large mass of muscle (or at least, it has the potential to be large) on the inner part of the backs of your upper arms.

The long head is the only tricep head that crosses the shoulder joint. It's also the most sizable triceps muscle by far.

Therefore, to work this all-important muscle to its full potential, you need to place your shoulders into either flexion or extension and then perform some kind of tricep extension.

Most lifters naturally do some kind of overhead movement to stretch the long head via shoulder flexion. But many people don't realize that they're missing out big time by failing to put the biggest single muscle head of their upper arms under a proper peak contraction.

This is where the cable cross tricep extension comes in. It's a cross between a pushdown and a kickback, and it absolutely smokes your triceps.

How to do a cable cross tricep extension

Here are two more types of cable crossover extensions that you can do to train your triceps effectively.

However, it's different in that it trains your triceps in maximum extension rather than in full flexion, which means that the cable cross extension produces a stronger peak contraction than any kind of overhead movement.

Since you're kneeling down, the exercise will be slightly more challenging because the cables have to travel further, which means that they’ll exert more tension earlier on in the rep (when your forearms are close to your biceps).

In this regard, the kneeling cable crossover extension is a great exercise for those who are very tall and would otherwise struggle to get a sufficient triceps stretch (when you're tall, the cables naturally remain closer to their pulleys, which means that they exert less tension initially).

If you don't have access to a compact cable station to do the cable cross extension in the recommended way, then you can perform the exercise on a longer cable machine instead.

While the peak contraction won't be as intense when you use a reverse grip (because the handles are in front of your body; hence, your shoulders won't be in extension), you still get to train your triceps independently. This isolateral training style promotes even triceps development, which will ultimately help your upper arms to look more symmetrical.

The trick to getting the most from this movement is to use strict form: Extend your shoulders slightly behind your body (or at least bring them further back than in a standard pushdown) and keep your elbows completely still while you perform the elbow extension motion.

The tricep cable crossover extension produces a potent peak contraction in the backs of your arms because it trains the long head in its shortened anatomical position.

When a muscle is at its shortest length, that means that it's maximally contracted. For the triceps, this contraction is achieved when your shoulders are extended behind your body.

The peak contraction on this exercise is so unmistakably intense that you don't need to guess if you're performing the movement correctly; your triceps will let you know by feeling as if they're about to knot up.

So not only will you get a great workout from the cable cross tricep extension, but the mind-muscle connection that you develop will naturally carry over to your other tricep exercises and make those more effective too.

The cable crossover tricep extension promotes the proper form by forcing you to keep your elbows still. Maintaining a stationary elbow position ensures that your triceps are doing all of the lifting, which is the whole point of an isolation exercise.

If you allow your elbows to drift forward, however, then your shoulders will creep into flexion, which in turn means that you won't be able to maximally contract your triceps (a maximum triceps contraction requires your shoulders to be in extension, remember?).

The key to getting the most from this cross body tricep extension exercise is to flex your triceps forcefully when pushing the cable down but also to hold the contraction for a second or two.

You want to hold the peak contraction for at least a second because it's (by far) the hardest part of the movement. In other words, it's the part of the rep in which your triceps are under the most tension, so you may as well make it count.

It's difficult to perform cable crossover tricep extensions with large amounts of resistance because it trains your triceps in their weakest (i.e., shortest) anatomical position. Yet, this is a blessing in disguise because it encourages you to focus on improving your form, which is the foundation of any successful muscle-building endeavor.

Similarly, because you're training each arm independently, like in a horizontal tricep extension, the cable cross triceps extension is naturally an excellent exercise for developing proportional upper arms because it provides your triceps with equal amounts of work.

So if you have noticeable size asymmetries between your triceps, then it's well worth performing the cable cross over tricep extension on a weekly basis. Improving your muscular symmetry, after all, will help you to sculpt a more aesthetic physique independent of gaining any more mass.

Like many things in bodybuilding, the devil is in the details; it's about how you perform the cable crossover tricep extension more so than how much weight you're lifting (muscle tissue doesn't know what 'weight' is).

You're best off sticking with relatively high reps for this exercise (12-15) so that you don't reduce the potency of the peak contraction (the most critical part of this particular exercise) by lifting too much weight.

You can do the cable crossover triceps extension as a primer to pre-active your triceps before your other, heavier exercises. Or, you can simply use it for hypertrophy by training closer to failure and making every contraction count by squeezing your triceps as hard as you can.