Learn how to do the 7 types of kneeling cable tricep extensions. 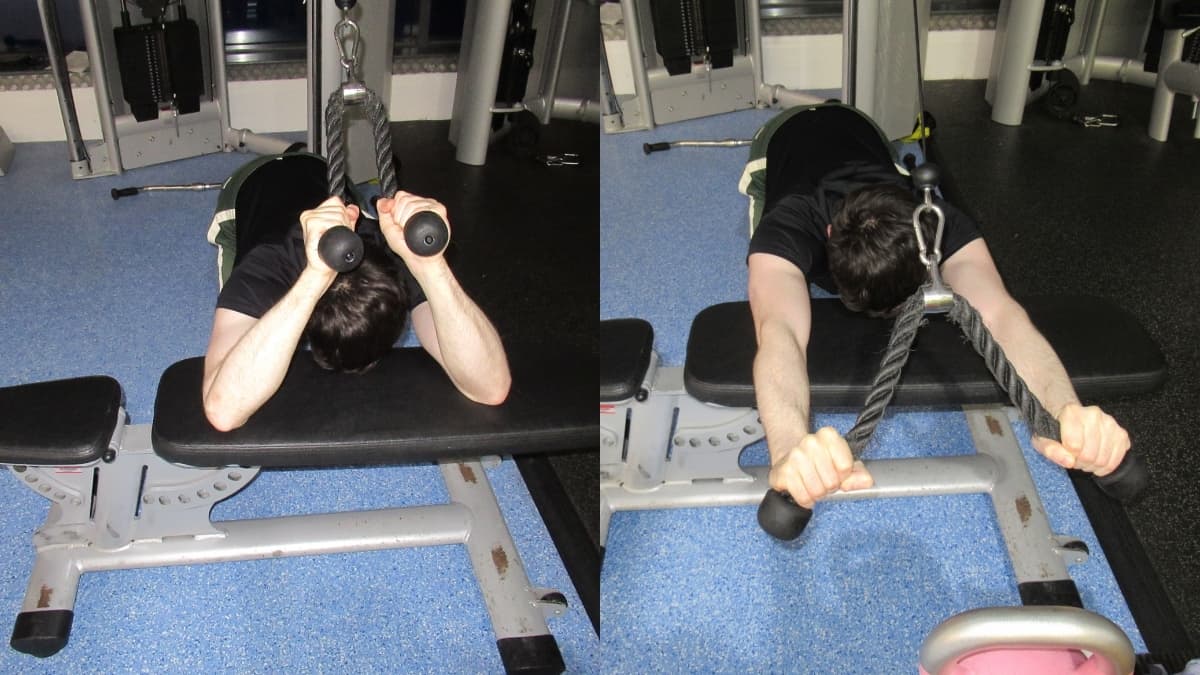 Due to the triceps insertion at the olecranon process of the ulna, the triceps muscles cross the elbow joint and are thus responsible for extending it.

Yet, the largest head of the triceps, the long head, also crosses the shoulder joint because it originates on the scapula. This means that in order to train this critical tricep head optimally, you need to place your shoulders into flexion so that the long head can receive an intense, growth-stimulating stretch.

This is why the kneeling cable triceps extension is such an effective exercise. Not only does the kneeling tricep extension place the long head under that all-important, intense eccentric stretch, it also minimizes cheating by having you brace your elbows against the bench.

The following guide shows you how to do 7 different kneeling cable tricep extension variations with the proper form.

How to do a kneeling cable tricep extension

Learn how to do the cable kneeling triceps extension with various attachments, body positions, and pulley heights.

The kneeling cable overhead tricep extension is distinctly different from the bent-over version—and not just in terms of torso position.

In addition to being performed with a fairly upright torso, the kneeling cable overhead extension provides your triceps with an enhanced eccentric stretch because, since you're using a low pulley, the cable is always trying to pull your triceps down, thus stretching the long head (the head that's most activate when your shoulders are in flexion).

As with the kneeling cable tricep extension, the kneeling overhead cable extension requires a considerable amount of core strength because, as mentioned, the cable is always trying to pull your body back toward the machine.

So in order to avoid working your abs at the expense of your triceps, it often makes sense to do a one arm kneeling overhead cable triceps extension instead. Sure, your sets will take longer to get through since you're training one arm at a time, but your core won't have to work as hard, which will likely make it easier to focus on training your triceps.

The half kneeling cable tricep extension is a more triceps-focused exercise than the tall kneeling version because you don't have to put as much effort into keeping your abs tight.

While your quads do get worked isometrically during the half kneeling cable overhead extension, the stimulation isn't enough to make your thigh endurance the limiting factor.

Kneeling cable extension from a mid-pulley

If you find that performing a kneeling cable extension from a high pulley demands too much abdominal exertion (this is a tricep isolation exercise, remember?), then you can reduce the core stability requirement of the movement by performing it from a mid-pulley position instead.

This way, the cable doesn't have to travel as far, which makes it much easier to get the rope into position and also less taxing to maintain the bent-over torso angle.

Of course, not all cable stations have adjustable pulleys. If this is the case for your machine and you want to keep your core activation down, give the next exercise a try instead (you can also do a cable crossover tricep extension, which can be performed with two fixed high pulleys).

The kneeling one-arm overhead cable triceps extension is the ideal exercise for improving your mind-muscle connection because it doesn't work your abs as much as the two-arm version (since you're lifting lighter), which in turn lets you focus more on activating your triceps.

Yet, the single arm kneeling cable extension has another significant benefit; it enhances your triceps symmetry by making you train each arm separately.

When you're working one arm at a time, your stronger side can't dominate the movement. This unilateral training style equalizes the amount of stimulation that your triceps are receiving, which in turn helps your upper arms to look more proportional.

If you don't have access to a tricep rope, then the v-bar is the next best thing.

Unlike a straight bar attachment, the v-bar places your hands into a semi-pronated position, which, in theory, reduces the strain that your wrists get put under.

The problem is that, like the v bar overhead extension, the v-bar kneeling cable extension forces you to use a very narrow fixed grip. This hand position can actually cause a significant amount of wrist discomfort for many lifters, which is why you're better off using a rope where possible.

While a v-bar is easier to stabilize than a rope (it doesn't have two freely moveable ends), thus enabling you to lift a bit more resistance, you can't "split" a v-bar at the end of a rep like you can a rope, which means that your triceps don't get a particularly intense peak contraction.

Although the rope attachment provides a better contraction, the bar attachment allows you to lift more weight because it's easier to stabilize.

Just make sure to use an EZ bar attachment where possible so that your wrists don't get forced into extreme amounts of pronation, which is what happens when you use any kind of straight bar.

Using the bar attachment for kneeling cable tricep extensions enables you to overload your triceps with more resistance than using a rope does because you can push the palms of your hands into the bar to generate maximum force.

You can do this to an extent with the rope as well, but because you're pushing against two separate sides of the rope—which requires more stabilization—you can't generate as much total force.

Reverse grip kneeling triceps extensions are a good exercise in that they train all three heads of the triceps.

The problem is that reverse grip overhead triceps extensions and the like make it harder to maintain a firm grip on the bar. This isn't what you want when you're using cables because the bar could fly out of your hands and make the weight stack slam.

Since the backs of your arms are braced against the bench, you can't use any momentum from your shoulders to jerk the bar or rope up.

Likewise, because you're kneeling on the floor, you can't swing the weight up with your hips, legs, or back.

While this might mean using less resistance than usual, it also means that your triceps will be receiving far more tension because they won't be robbed of stimulation by your larger, competing muscle groups.

Another advantage is that the kneeling cable extension places plenty of tension on the long head of the triceps (because your shoulders are in flexion), which, as noted, is the biggest head of the triceps and thus the most important for gaining mass.

The kneeling cable triceps extension is the ultimate isolation exercise. By rendering your other body parts—shoulders, legs, hips, back—unable to produce much in the way of force, kneeling cable extensions force your triceps to do the vast majority of the work, which in turn primes them to grow bigger and stronger.

In fact, your abs are the only other muscle that gets worked, and even then, it's only isometrically.

Most lifters gravitate toward using a bar on this exercise, which is perfectly fine. But if you want to make each rep more challenging for your tris by intensifying the peak contraction, then your best bet is to use a rope so that you can "split" the ends as your elbows approach lockout.