We tried every type of decline cable triceps extension: Here are the 5 best variations for hypertrophy. 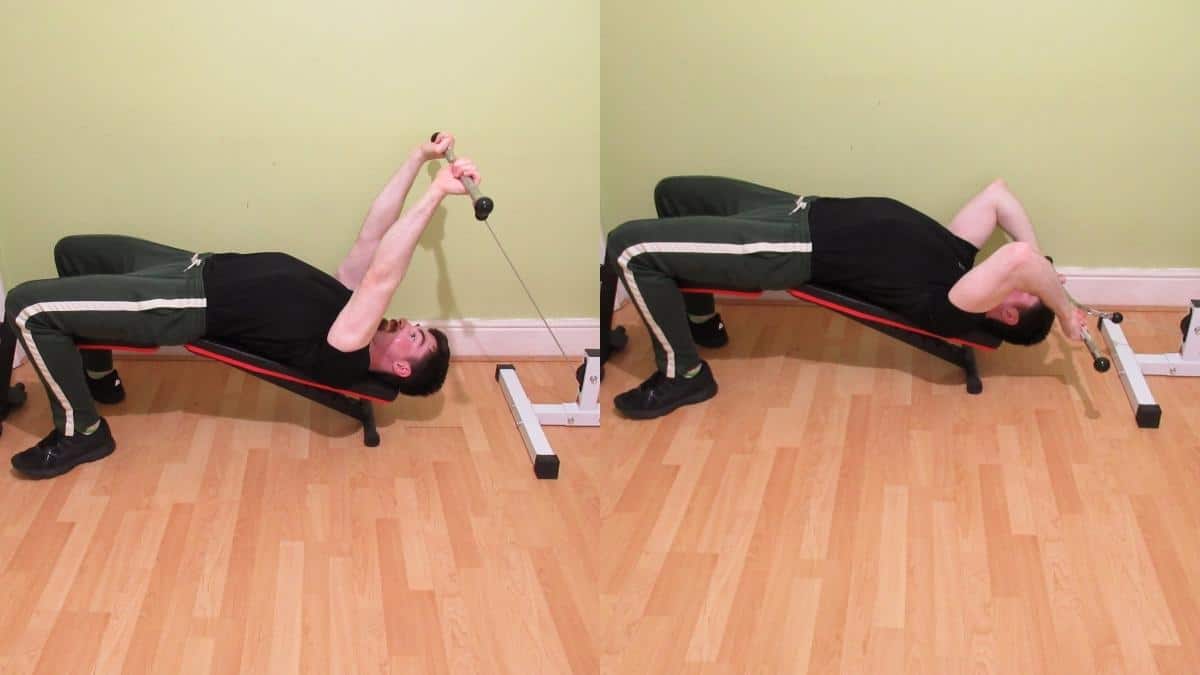 The decline cable extension trains all three triceps brachii heads and, as such, is an excellent exercise for building overall triceps mass.

But unlike the free-weight decline triceps extension, the lying cable extension challenges your triceps with constant tension so that your muscles have to work even more intensely.

You can’t just rest at the top of the rep like you can with the decline barbell extension because the pulley is always exerting some kind of force on your triceps.

This tutorial shows you how to perform the five decline cable tricep extension variations with the proper form and discusses the pros and cons of each version. This way, you can decide which exercise best aligns with your training goals.

How to do decline cable tricep extensions

There are five different ways to do a decline triceps extension with cables. You saw the curved bar variation above, which is essentially the cable version of the decline EZ bar tricep extension, and now it’s time to learn about the other exercises to see which one is best for you.

The decline rope extension is an effective exercise for pumping up your triceps because you can spread each end of the rope to intensify the peak contraction (you can also do this with the cable incline tricep extension).

Since you have to lock out each end of the rope separately, the exercise is also helpful for ensuring that both of your triceps receive similar amounts of work, which in turn can help to prevent size and strength asymmetries.

The only downside (if you can call it that) is that, since the rope attachment is marginally harder to stabilize than the bar attachment, you won’t be able to overload your triceps with quite as much resistance.

The intensified peak contraction, however, should more than make up for the reduced resistance.

The decline v-bar extension is similar to the rope variation in that your hands are in a semi-pronated position, which naturally puts less pressure on your wrists.

You don’t get the same freedom of movement like you do during the rope version, but since you’re using cables, you still get a good pump due to the constant tension and consistent resistance.

The main drawback of using a v-bar is that, since the sides of the attachment are so close together, you’re forced into using a really narrow grip, which in turn could cause your elbows to flare out and take more strain as a result.

Decline cable extensions with a bar

Performing a decline cable triceps extension with a straight bar attachment lets you lift plenty of weight to target the fast-twitch muscle fibers.

Yet, despite its mass building prowess, this version of the decline cable tricep extension places more pressure on your wrists than the curved bar variation because your hands are forced into full pronation.

So if your gym has an EZ cable attachment, then it’s definitely recommended to use that if you want to keep your wrists in a more natural, less injurious position.

If you want to maximally isolate each of your triceps muscles to sculpt near-perfect symmetry, then doing the decline one arm lying triceps extension with cables is a great idea.

Although you’ll need to spend extra time in the gym in order to train each arm separately, you also get to ensure that both of your triceps are receiving identical amounts of work.

Additionally, training one arm at a time really lets you hone in on each of your triceps and improve your mind-muscle connection, which in turn can make your other exercises more effective since you’ll be able to activate the target muscles (i.e., your triceps) to a higher degree.

The verdict: Which decline cable tricep extension is the most effective?

All things considered, the rope and curved bar decline cable tricep extensions are the best exercises because they offer the most comfortable hand positions, something which becomes very important as you gain strength.

Spreading each side of the rope as you approach the end of the rep really intensifies the peak contraction and ensures that both of your triceps are working fairly evenly.

Using the bar, on the other hand, doesn’t result in a peak contraction of quite the same intensity, but it does enable you to lift more weight since bars require less stabilization than ropes.