Learn how to master the decline EZ bar tricep extension. 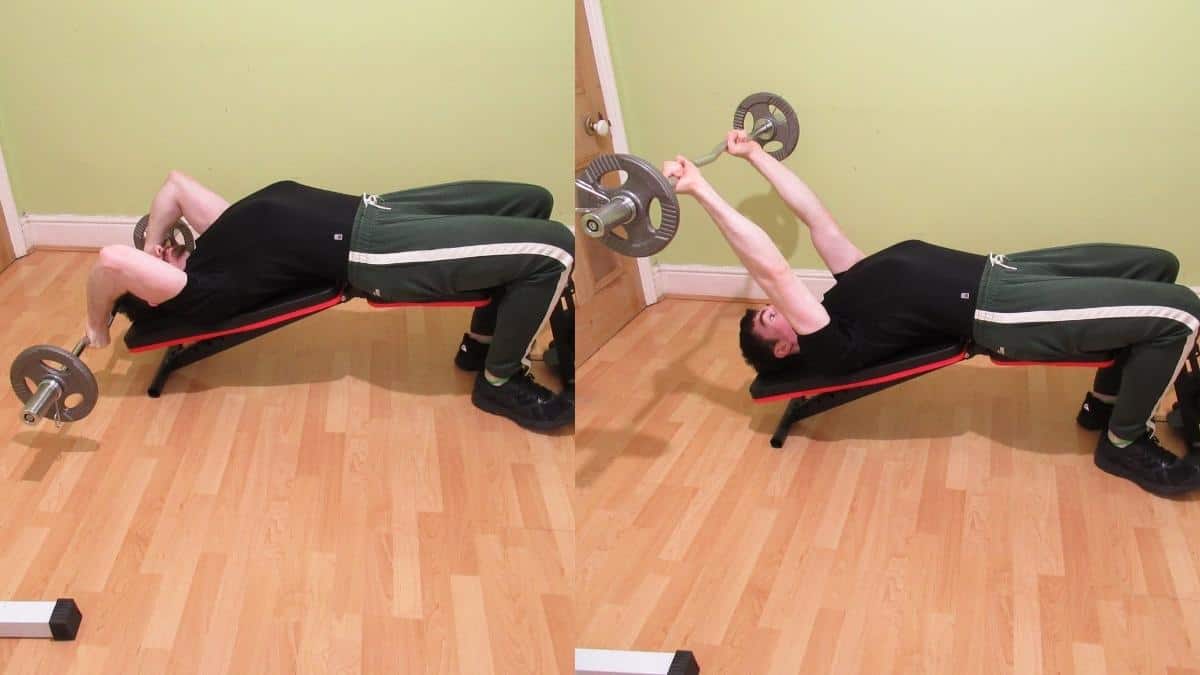 Due to the tricep muscle anatomy, the biggest head of the triceps—the long head—acts on two joints; the elbow (like the other two heads) and the shoulder.

So in order to grow your triceps to their full potential, you need to perform exercises like EZ bar triceps extensions that combine elbow extension with a certain amount of shoulder movement so that you can put the long head under an optimal eccentric stretch.

This tutorial explains how to do a decline EZ bar triceps extension with the proper form and then discusses the effectiveness and safety of the exercise. If you don’t have access to an easy curl bar, however, then you can do the decline dumbbell triceps extension instead and still get great results, providing that you lift with the correct technique.

How to do a decline EZ bar tricep extension

How effective is the decline EZ-bar triceps extension?

The lying EZ-bar decline triceps extension is effective precisely because it gives extra emphasis to the long head of the triceps, which, as mentioned, is larger than the lateral and medial heads (and probably larger than those two heads combined).

As such, the decline EZ triceps extension is incredibly effective for increasing the size of your upper arms because it trains the triceps, which are known to account for two-thirds of your arm mass.

Additionally, since you’re doing the exercise on a decline, your triceps are put under a more intense stretch because, due to the slope of the bench, the weight is always trying to pull your shoulders backward, which means that your triceps have to contract to keep the bar in place.

Like the decline barbell extension, the decline EZ bar extension is a great exercise for gaining strength on a regular basis because you can use small or even fractional weight plates to increase the resistance in very manageable increments.

This extra strength will boost your compound press performance because your triceps will be accustomed to locking out heavy loads, which is a very similar practice to locking out a heavy bar during a bench press or overhead press.

Like the EZ bar incline tricep extension, decline EZ bar triceps extensions make use of the easy curl bar. Unlike straight bars, which force your wrists into extreme pronation, easy curl bars have semi-pronated grips that are much more comfortable to hold—especially when you’re lifting heavy.

Not having to think about the discomfort in your wrists enables you to better focus on training your triceps, which in turn helps you to establish a stronger mind-muscle connection and generate a more potent pump.

You can make decline EZ bar tricep extensions safer still by bringing the bar behind your head rather than lowering it to your face. Since you’re on a decline, the bar will have a tendency to move faster during the eccentric (though you can obviously slow it down), so you need to be really careful that the weight doesn’t slam into your head if you do decide to lower the bar to your face.

Bringing the bar behind your head increases the amount of shoulder flexion at the glenohumeral joint, which in turn places the all-important long head of your triceps under even greater eccentric stretch, the phase of a rep that’s most crucial for stimulating hypertrophy.

Who should do the decline EZ bar triceps extension?

If you want to make your triceps bigger or simply more toned, then the decline EZ-bar lying triceps extension is an excellent exercise for the job.

Although the setup is a bit trickier than the flat bench version—you’ll need to reach down to grab the bar or ask someone to pass you it—the decline EZ bar tricep extension puts your muscles under a virtually unbeatable eccentric stretch thanks to the slope of the bench.

Or, to put it another way, when you do tricep extensions on a decline bench, your shoulders have a tendency to move into a higher degree of flexion, which in turn places the long head of your triceps under a more significant, growth-stimulating stretch.

The decline cable triceps extension is a great alternative if you don’t want to use free weights. This is because you can perform the exercise with a variety of different attachments to see which is one the most comfortable to hold and which also gives your triceps the most effective workout.

Getting the bar into position during the decline EZ bar triceps extension is undeniably complicated if you’re using a dedicated decline bench that has a foot holder.

This is because you need your hands free to climb onto the bench.

You could just use a decline bench without a foot holder, which is fine if you’re not lifting particularly heavy or if you have a very strong core.

However, you don’t want to work your abs at the expense of your triceps. So most of the time, you’re going to want to hook your feet under the foot holder of a “proper” decline bench.

This invariably means reaching down to grab the bar (easier if you have long arms) or asking someone to pass it to you for every set. So in terms of setup complexity, the EZ bar decline triceps extension doesn’t quite make the grade.

But in terms of overall effectiveness, the decline EZ-bar triceps extension passes the test with flying colors for all of the reasons mentioned above—long head emphasis, intense eccentric muscle stretch, wrist-friendly semi-pronated grips.