How to do a decline barbell extension for your triceps

Learn how to bulk up your triceps with the decline barbell extension. 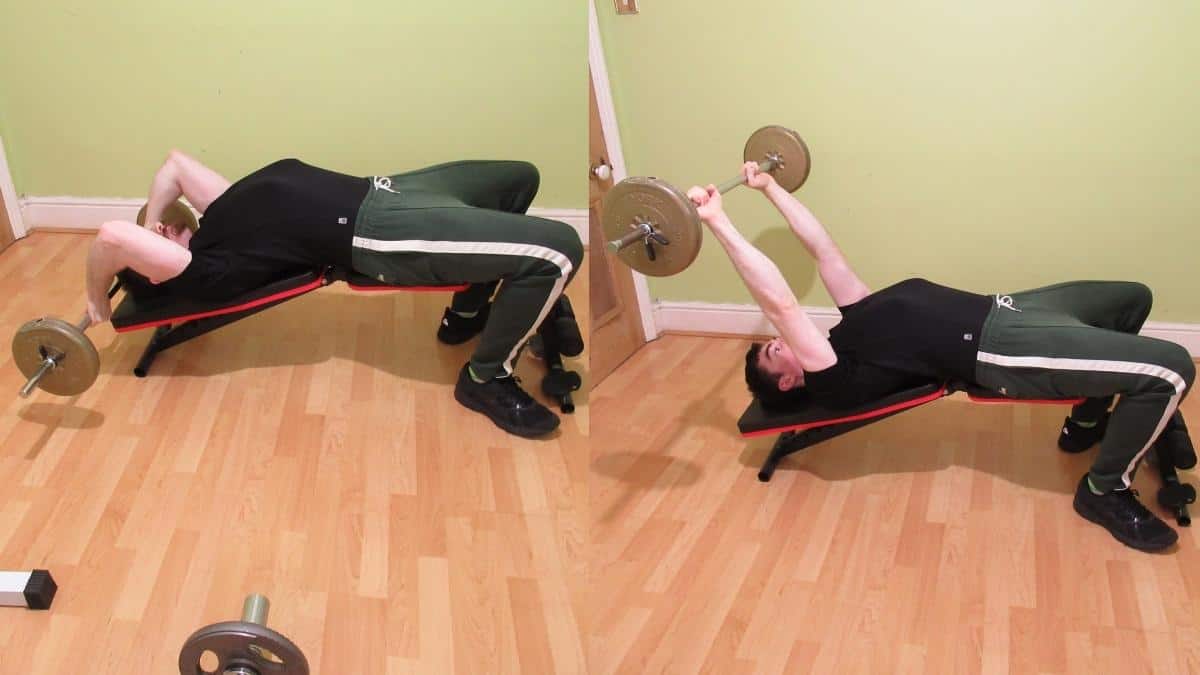 The decline barbell extension trains all three triceps brachii heads via elbow extension and gives extra emphasis to the biggest head—long head—by putting your shoulders in flexion, which places the long head under a significant eccentric stretch.

The decline barbell lying tricep extension enables you to overload your muscles with plenty of resistance because barbells are easier to stabilize than dumbbells and are also highly conducive to microloading via small and even fractional weight plates.

You can, of course, achieve similar results by performing the decline dumbbell triceps extension.

However, for maximum mass, barbells are generally the best training tools since, as mentioned, they allow for a greater overload of the triceps. Plus, the decline barbell triceps extension has excellent carryover to your compound presses. More on that later.

How to do a decline barbell extension correctly

Decline barbell extensions are what you would have to call a mixed bag.

On the one hand, decline barbell tricep extensions can really bulk up your arms when you lift heavy enough with good form. But on the other, they can be a nightmare to set up, depending on which kind of decline bench you’re using.

Like the barbell incline tricep extension, the decline barbell tricep extension has excellent mass-building potential because straight bars enable you to overload your triceps with more resistance than dumbbells since barbells require less stabilization.

All else being equal, lifting more weight leads to greater hypertrophy.

So if you’re in pursuit of maximum triceps mass, then it’s a good idea to program the bulk of your training (even your isolation work) around barbell-based movements like the barbell decline tricep extension.

Unlike the dumbbell version, which often involves making massive weight jumps to graduate to the next pair of weights, the decline barbell extension is highly conducive to gaining triceps strength because you can increase the resistance in very manageable increments with the help of fractional plates.

Of course, bumping up the load by half a pound might not seem worth it. But it sure beats lifting the same weight for weeks on end if you ask me.

And besides, over time, these small increases really start to stack up and eventually make themselves visibly apparent in the form of more triceps size and strength.

The hardest part of any compound press for your triceps is the lockout phase of the rep. Your triceps, after all, are elbow extensors, so what better way to improve your lockout strength than by performing heavy tricep lockouts, also known as tricep extensions?

Decline barbell extensions—more so than the flat bench version—really make your triceps proficient at locking out heavy loads because decline extensions place more tension on your triceps at the top of the rep.

Gravity is always trying to pull the bar back and ultimately to the ground. So even at the top of the rep, the barbell is still trying to pull your shoulders back, and it’s up to your triceps to keep the bar locked in place.

Hence, the decline barbell extension is more challenging at lockout than its flat bench counterpart and thus has better carryover to your compound presses.

Con: It could hurt your wrists

Straight bars force your wrists into what you could only call an unnatural amount of pronation.

After all, do you walk around with your knuckles facing completely forward?

Of course you don’t!

It’s an unnatural hand position. And when you add a heavy barbell into the mix, your wrists often take a beating because you’re forcing them into a position—under resistance—that they’re not used to being in, especially not for extended periods of time.

EZ bars have semi-pronated grips that are much more comfortable to hold. While they’re not a cure-all for wrist discomfort, semi-pronated is actually a very natural hand position for many people. So unless you’re lifting monster weights, you’re unlikely to feel any pain from this exercise.

Con: The setup is complicated

Although the setup for the decline barbell extension isn’t as complicated as that of the decline cable tricep extension, it’s still tricky to get the weight into position.

If you’re using a decline bench that has foot holders, then you need your hands to be empty so that you can get your body into position. This means that you either have to reach down to grab the bar (which, depending on your arm length and chosen decline angle, may or may not be possible) or ask someone to pass it to you before every set.

The setup is harder when you use a decline bench with foot holders. However, this type of bench also reduces the core stability requirement of the exercise.

The other option is to use a decline bench that doesn’t have any foot holders.

With this version, you can just lie back with the bar and start training your triceps. The downside is that the non-foot holder variation taxes your core a lot more, which could even make you slide down the bench during your set.

So unless you’re lifting relatively light weight, you should probably use a dedicated decline bench so that you don’t work your abs at the expense of your triceps (decline barbell extensions, after all, are an isolation exercise).

Of course, if you don't have any kind of weight bench, then you can do a standing tricep extension with a barbell instead.

The decline barbell triceps extension provides an excellent eccentric muscle stretch since, on a decline bench, the bar always has a tendency to travel backward.

This sloping angle makes it easier to put the long head of your triceps under an intense stretch because your shoulders are in a higher degree of flexion than they are when you do the exercise on a flat bench.

The only drawback of the movement is that getting the barbell into position can be tricky and often requires you to ask a fellow gym user to pass you the bar.