How to do a cambered bar/EZ bar overhead tricep extension

Learn how to do 4 variations of the overhead EZ bar extension. 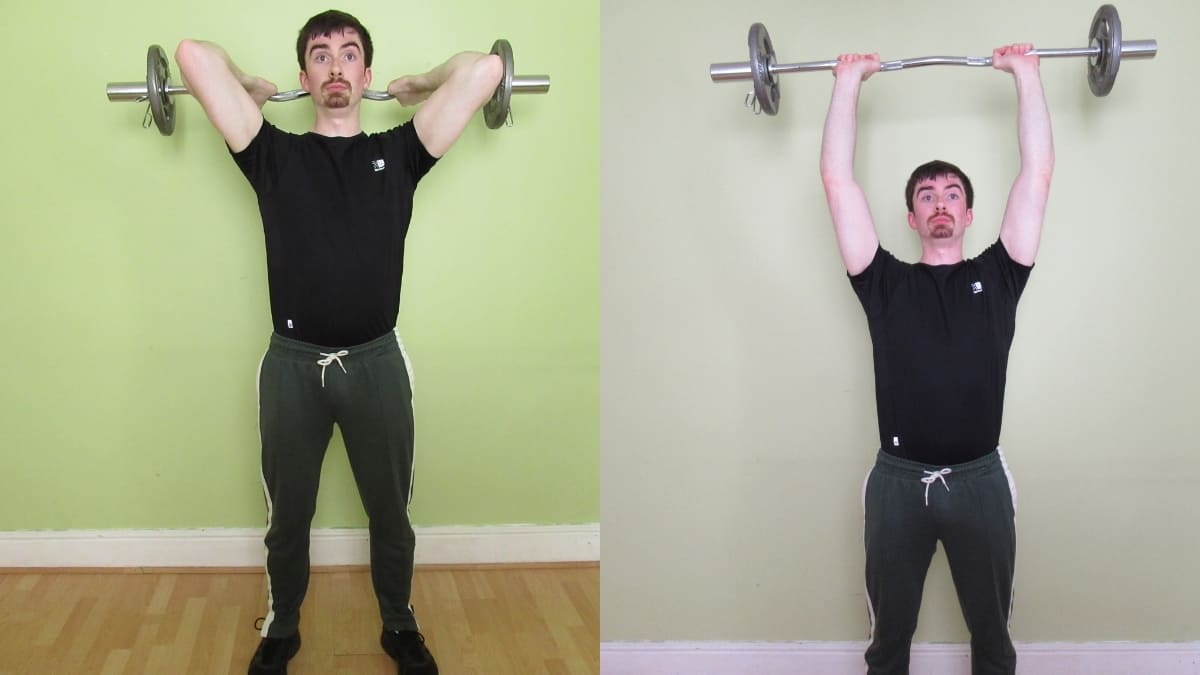 EZ bars also have semi-pronated grips, which, like the lying EZ bar tricep extension, means that the standing and seated cambered bar extension are also very comfortable movements to perform. This is because your hands and wrists aren’t forced into extreme amounts of pronation like they are when you do a standing overhead barbell triceps extension.

This article shows you how to do 4 variations of the overhead EZ bar extension and then discusses the effectiveness of the exercises as well as how many reps and sets you should do for muscle growth.

How to do an overhead EZ bar extension

The standing EZ bar triceps extension is a great exercise, not just because it hits all three heads of the triceps but also because it’s convenient; you only need a bar and a few weights to perform it.

Yet, in addition to EZ bar incline triceps extensions and EZ bar decline tricep extensions (which are more of a lying exercise than a standing/seated exercise), there are 3 other overhead EZ bar extension variations that you can do for your triceps.

The seated cambered bar tricep extension, like its standing counterpart, trains all three tricep heads while giving special attention to the biggest of these heads, namely, the long head.

This is the long, bulky region of the triceps brachii that resides on the inner part of the backs of your upper arms. The long head is bigger than the medial and lateral heads combined, so if you’re training for mass, then it makes sense to perform plenty of exercises that work this muscle well.

The seated overhead cambered bar extension is an excellent mass-building choice in this regard because when your torso is braced against the backrest of the bench, you can put more effort into training your triceps because you don’t have to work as hard to stabilize your core.

Of course, the seated EZ bar tricep extension isn’t viable if you’re training at home without a bench, but it’s still the top choice if you’re seeking maximum triceps isolation.

The only downside of the seated cambered bar tricep extension (depending on your point of view) is that it burns fewer calories than the standing version because your leg and core muscles aren’t as active when you’re sat down.

This reduction in energy expenditure may actually be a good thing if you’re trying to bulk up because it will make it easier to stay in an energy surplus, which is the optimal energy balance for gaining muscle mass.

You can perform reverse overhead tricep extensions with an EZ bar in both a standing or seated position.

Many lifters like the reverse (which is to say supinated) version more than the standard variation because it encourages them to keep their elbows tucked in, which in turn reduces the pressure on their elbow joints.

Yet, because the triceps only act on the elbow (with the exception of the long head, which also acts on the shoulder joint), changing your grip doesn’t actually force you to tuck your elbows in.

Or, to say it another way, it’s entirely possible to rotate your palms from pronation to supination while keeping your elbows still.

Nevertheless, using a reverse grip can certainly encourage the proper elbow position. So if you have a hard time keeping your elbows tucked in, then the reverse standing EZ bar overhead extension could be worth a shot.

To be sure, some elbow flare is completely fine. You just don’t want your elbows to point straight out to the sides.

It’s an excellent exercise for strengthening your abs isometrically, but it’s not optimal for training the triceps because your core strength is likely to be the limiting factor, which isn’t what you want on an isolation exercise.

Still, the kneeling EZ bar overhead extension could be a good accessory lift, especially if the bulk of your strength training revolves around exercises that require a lot of core strength.

From a hypertrophy perspective, however, your best bet is to stick with exercises (i.e., the seated EZ bar tricep extension) that don’t work other body parts at the expense of the target muscles.

However, from a comfort perspective, using an EZ bar/cambered bar is a better choice than using a straight bar.

This is because cambered bars have semi-pronated grips, which means that your wrists don’t get forced into unnatural amounts of pronation like they do when you use a regular barbell.

As such, EZ bar overhead tricep extensions place less pressure on your wrists than the straight bar version of the exercise, which, again, makes it easier to focus on training your triceps.

In terms of muscle-building effectiveness, the seated and standing EZ curl bar overhead tricep extension is just as prolific as any kind of seated tricep press.

This is because the EZ overhead extension places your shoulders into flexion, and since only the long head of the triceps (the biggest head) crosses the shoulder joint, this is the head that receives the most work when your arms are behind your neck.

How many reps and sets should you perform?

Performing 3-5 sets of 8-15 reps 1-3 times per week is a good general recommendation.

With tricep training, the elbows are the limiting factor for most people. While the triceps themselves are a fast-twitch powerhouse that responds exceptionally well to low-rep, heavy lifting, most of the time, your elbows simply can’t keep up with the strength of your triceps.

Therefore, your best bet is to save the really heavy lifting for your compound presses when your shoulders are there to share some of the strain with your triceps.

But you might want to use high repetitions sparingly because pumping out 20+ reps on every set creates a lot of central fatigue. This kind of full-body fatigue decreases your muscle’s ability to produce force (and not just your triceps muscles), which in turn can make your subsequent sets less effective.

For these reasons, moderate reps generally provide the best stimulus to fatigue ratio.

Conclusion: Who should do the overhead EZ bar tricep extension?

Anyone who wants to build triceps mass or improve the muscle tone of their arms can benefit from performing the overhead EZ bar extension. It’s an exercise that trains every head of the triceps while giving extra emphasis to the largest head (the long head) due to its overhead shoulder flexion positioning.

Using an EZ bar rather than a regular barbell also reduces the pressure on your wrists because cambered bars have semi-pronated grips that are much more comfortable to hold.

The EZ bar overhead tricep extension is also customizable in that you can perform it one of two ways: sitting down to maximally isolate your triceps or standing up to train your core muscles and burn more calories.