Learn the 4 pros and cons of the incline barbell tricep extension. 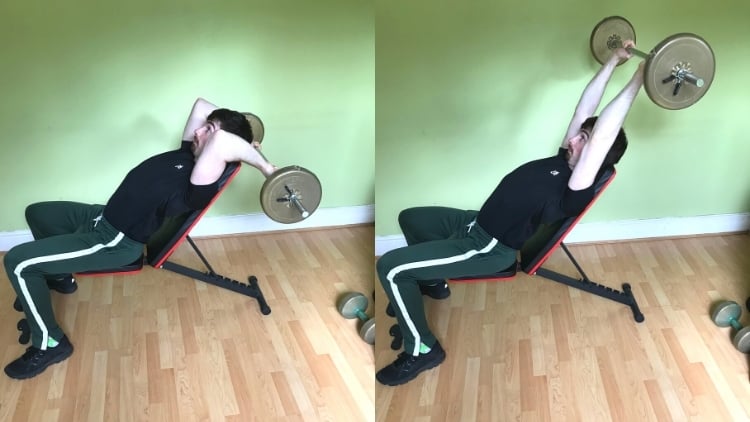 Understanding the triceps brachii origin and insertion helps you to grow your arms because you’ll know which exercises are optimal for hypertrophy.

Since only the long head of the triceps crosses the shoulder joint, you need to perform exercises, such as the lying barbell tricep extension, that combine elbow extension with shoulder extension, if you want to train this head (the biggest of the three tricep heads) optimally.

Like the incline dumbbell tricep extension, the incline barbell triceps extension is an excellent choice for doing just that. But being a barbell exercise, this particular incline extension enables you to overload your triceps with even more muscle-building resistance than the dumbbell version.

And since your shoulders are in a stretched position, this barbell overhead tricep extension variation is also highly effective for training the long head of the triceps, which is the single most important muscle in your upper arm for gaining size.

How to do an incline barbell tricep extension

Like the seated barbell extension, incline barbell tricep extensions are excellent for gaining strength and muscle because you can overload your triceps with high amounts of resistance. However, there are also two major drawbacks that you need to consider before including barbell incline tricep extensions in your workout routine.

Pro: Bulks up your triceps

Barbells are the mass-building training tool of choice for those seeking to bulk up because they enable you to tax your triceps with more weight than dumbbells since bars are easier to stabilize.

This extra resistance is especially beneficial for building the triceps because the triceps brachii is a fast-twitch dominant muscle that responds excellently to heavy lifting.

Sure, incline barbell triceps extensions might not be as effective as the dumbbell version for sculpting symmetrical triceps, but they’re certainly more conducive to building mass.

And after all, muscle symmetry hardly matters if you don’t have a solid foundation of size to make that symmetry visible.

Since barbells are easier to progressively overload than dumbbells (hello fractional plates), the incline BB tricep extension is also superior for gaining strength because the weight increments are smaller.

The hardest part of an incline barbell tricep extension is the lockout phase of the rep.

Of course, once you do lock out your elbows, there’s very little tension on your triceps, but that’s not the point.

During compounds presses like the bench press and overhead press, the hardest part of the movement for the triceps is the lockout part of the rep (for the pecs and shoulders, it’s pushing the bar off your chest).

As such, performing an incline barbell triceps extension can boost your bench press and OHP strength by training your triceps to become proficient at locking out heavy weights.

Strengthening individual muscles is one reason why bodybuilders do plenty of isolation exercises—but it also enables them to overload their muscles with more resistance during compound exercises (and thereby stimulate greater hypertrophy).

Powerlifters can, of course, benefit from doing incline barbell tricep extensions as well because the lockout portion of a bench press is an area that many lifters struggle with.

As with the incline EZ bar tricep extension (which, admittedly, is more wrist-friendly due to the semi-pronated grips), tricep size asymmetries are a reality of the incline barbell triceps extension because your stronger arm is likely to do more work than your weaker arm.

A good tip in this regard is to get someone to film your set: Is the bar lopsided?

If so, then you know that your stronger triceps muscle is dominating the movement.

You can correct this work imbalance by focusing on lifting the bar equally with both arms. Of course, you might not see immediate results (certainly not in muscle symmetry).

But over the weeks and months, in which time you should ideally film yourself to monitor your technique, you should notice a marked improvement in your form.

Another preventative measure against tricep muscular imbalances is to simply use dumbbells as well as barbells so that you get heavy overload and isolateral stimulation.

If you’re performing the barbell incline tricep extension optimally by lowering the bar behind the bench rather than to your face, then it’s not a good idea to train to failure unless you have a spotter.

If you reached failure with dumbbells, on the other hand, then you could just bring the weights back with the help of your lats, which, more so than the long head of the triceps, are powerful shoulder extensors.

But with barbells, this isn’t possible because the bar would just hit the bench (or worse, hit your head).

Sure, you could just drop the barbell to get your shoulders out of an awkward position, but letting go of a bar from that height could put fellow gym users in danger.

So, for this reason, you either need a spotter to take the bar once you can’t do any more reps, or you need the necessary training experience to discern when your triceps are closing in on muscular failure.

You can, of course, sidestep this issue entirely by performing the incline barbell tricep extension in a squat rack (or by doing a cable incline triceps extension instead). But do you really want the odium of using the squat rack for isolation work?

Conclusion: Who should do incline barbell tricep extensions?

If you want to completely isolate your triceps and give the long head extra stimulation, then the incline barbell triceps extension is an effective exercise because you can’t cheat when your body is braced against the bench.

As such, your triceps have to do all of the heavy lifting, which also means that they get to benefit (i.e., grow from) all of the tension.

Just make sure to have a spotter handy (if you’re not good at gauging when your muscles are near failure) so that they can take the bar off you at the end of the set. You don’t want to get stuck with the barbell behind the bench because it could strain your shoulders (and dropping it certainly isn’t a good idea for reasons already mentioned).