How to do a lying and overhead kettlebell tricep extension

Here are the 9 most effective types of kettlebell tricep extension after trying more than 15 variations. 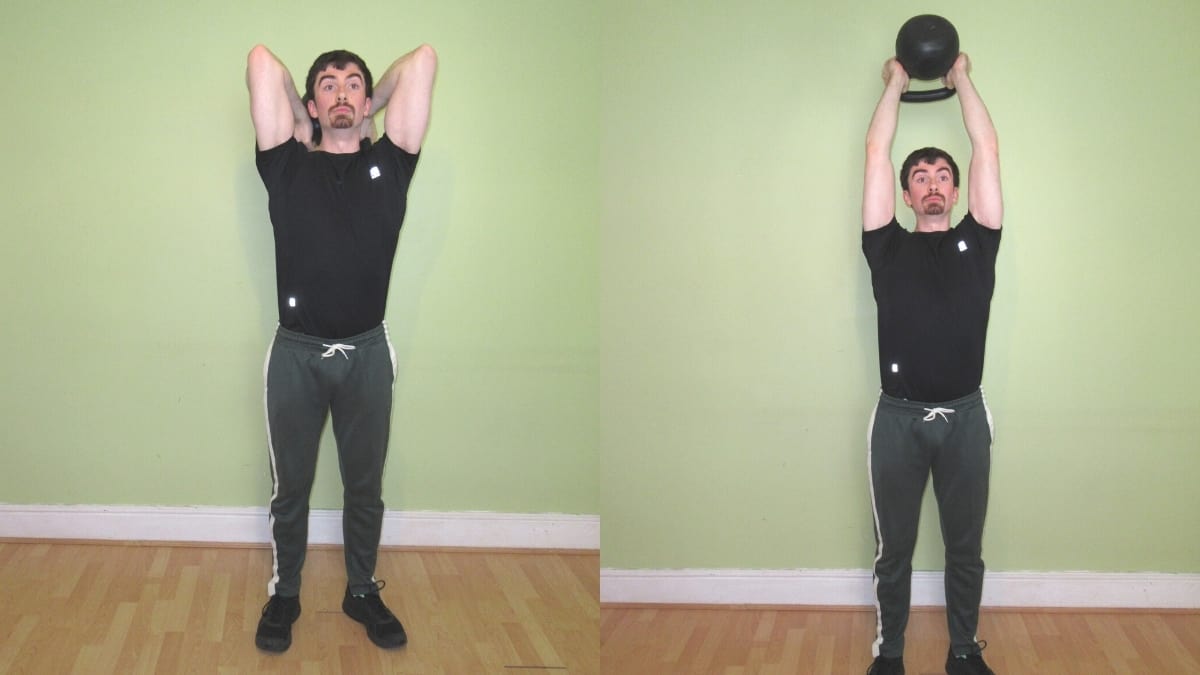 The kettlebell tricep extension is an effective mass-building movement because it hits all three heads of the triceps while giving extra emphasis to the biggest of these heads, the long head, via its shoulder extension positioning.

Unlike the traditional overhead tricep press, however, the kettlebell overhead extension taxes your tris with constant tension during all parts of the rep. This is because the bottom part of the kettlebell is always trying to pull your arms back, which means that your triceps have to contract harder to lock out each rep.

The same is true when your triceps are in a stretched position at the bottom of the rep; the weighted part of the kettlebell is trying to pull your arms backward, which intensifies the stretch even more.

How to do a kettlebell tricep extension

There are multiple types of triceps kettlebell extensions that you can do to build muscle. Some variations require a bench and two kettlebells, while others require nothing but a single kettlebell.

Let's examine the pros and cons of each exercise in more detail.

The one handed kettlebell tricep extension is the best choice for maximally isolating your triceps because, by training unilaterally, you don't have to split your focus across two limbs.

The only downside of the one arm kettlebell tricep extension is that it takes significantly longer to perform than the two-arm version. It's the same story with the one arm dumbbell extension.

So unless you have noticeable muscular imbalances or just really want to sculpt maximally symmetrical triceps, then you might want to stick to the regular kettlebell overhead tricep extension so that your workouts don't become too long.

The seated kettlebell tricep extension is strikingly similar to the standing version; the difference is that the seated tricep press doesn't require as much core strength.

While the reduced core strength requirement might seem like a negative at first, it's actually a positive thing for isolating your triceps because you can give more focus to the target muscles (i.e., to your triceps) when you don't need to put so much effort into stabilizing your core.

So for maximum hypertrophy, your best bet is to perform the overhead kettlebell extension in a seated position so that you don't work your abs at the expense of your triceps.

Lying triceps extensions require less shoulder mobility than overhead kettlebell extensions and are thus the top choice for those who want to train their triceps while keeping their rotator cuffs as safe as possible.

Again, you can do a kettlebell lying tricep extension in multiple ways.

My preferred training method is to work both triceps together but with a kettlebell in each hand. This way, you can ensure that both of your triceps are receiving similar amounts of work without needing to spend extra time in the gym, something that you'll need to do if you opt for the unilateral version of this exercise.

The other option is to hold one larger kettlebell with both hands. This can work, but past a certain point, you might struggle to grip the kettlebell with the necessary firmness to make the exercise safe (you certainly don't want to drop the weight during a lying kettlebell tricep extension).

The alternating kettlebell tricep extension has one significant benefit: It increases your training volume.

That's a bold claim, I know, but hear me out.

When you perform the tricep kettlebell extension in an alternating fashion, you're automatically giving each of your triceps a short period of rest in which the lactic acid can leave the muscle.

Therefore, by the time that the next rep comes around, your triceps will be less fatigued and thus able to perform more reps during each set.

More reps per set is simply another way of saying more training volume, performing enough of which is essential for maximizing muscle hypertrophy.

So while the alternating kettlebell triceps extension doesn't exactly skyrocket the training volume, it does lead to a small increase in time under tension without you spending any extra time in the gym.

If you want to encourage your triceps to grow in proportion, then make sure to include the kettlebell cross body tricep extension (or a similar unilateral exercise) in your training program.

Working your triceps in a unilateral fashion ensures that both sets of muscles receive similar amounts of work, which in turn helps to reduce your upper arm muscular imbalances, which ultimately makes your physique look more aesthetic.

The only downside of the cross body KB tricep extension is that your upper body, especially if you have large pecs and shoulders, can often get in the way. This reduced range of motion limits the eccentric triceps stretch, so in order to retain the exercise’s undeniable effectiveness, you’ll need to lower the kettlebell past your body if you’re built like a tank.

Of course, lowering the kettlebell sideways can also place a lot of stress on your shoulders. So you might want to stick with the regular single-arm version of the exercise if you’ve had shoulder problems in the past.

Like the kneeling dumbbell triceps extension, the kneeling kettlebell tricep extension strengthens your abs and arms simultaneously. This means that the movement has excellent carryover to many “functional” exercises that rely on your core strength.

Due to the extra abdominal exertion that this exercise requires (in comparison with the regular kettlebell tricep press), the kettlebell kneeling tricep extension can often cause your core strength to become the limiting factor if your triceps are already reasonably strong.

Thankfully, the solution is simple. If your isometric ab strength can’t keep up with the power of your fast-twitch triceps, then you can do a single arm kneeling kettlebell tricep extension instead.

Yes, this unilateral approach will make your sets take longer. But it instantly halves the amount of weight that you have to lift (because you're training each arm separately), which in turn means that you won’t be training your abs at the expense of your triceps.

The incline kettlebell tricep extension is a great exercise for putting your triceps under a deep, muscle-building eccentric stretch.

While getting the weights into position is slightly more challenging when you use an incline bench, many lifters report that the likes of the kettlebell and dumbbell incline triceps extension provide their triceps with much better stimulation than traditional flat bench exercises.

Just be careful if you plan on training to failure during the kettlebell incline tricep extension. If you reach muscular failure while your triceps are stretched, then you could get stuck with the weights behind the bench.

Of course, you could just bring your lats into the movement to lift the kettlebells forward (if you remember in the heat of the moment), which would likely get you out of trouble. Still, you don’t want to get stuck at the bottom of a kettlebell triceps extension rep because your elbows will be under a lot of pressure.

This pre-stretch means that your triceps are under tension from the very first inch of movement, which in turn means that they have to contract harder to balance the weights and lock your elbows out.

The triceps is a fast-twitch muscle and, as such, responds exceptionally well to heavy, low rep lifting.

Yet, the elbows typically have much less tolerance for such a training style than the triceps muscles themselves. So what do you do about it?

Simple. Save the really heavy lifting (8 reps or less) for your compound presses, and perhaps also your pushdowns, which are very joint-friendly.

For overhead work in particular and tricep extensions in general, your best bet is to stick to sets of 10-20 reps so that you don't put too much torque through your elbows.

Moderate reps have a more substantial joint-sparing effect than low reps and also enable you to accumulate training volume faster, which, as mentioned, is the one indispensable requirement for stimulating triceps hypertrophy.

How effective are kettlebell tricep extensions?

Performing tricep extensions with kettlebells is a safe and effective way to strengthen the backs of your arms.

Unlike dumbbell equivalents, kettlebell triceps extensions challenge your muscles with constant tension because the weighted part of the kettlebell is always trying to pull your arms back.

So even when you're at the extremes of the range of motion—maximum stretch and complete lockout—your triceps still have to contract intensely to prevent the weight from pulling you back.

Ultimately, on a per-set basis, the kettlebell tricep extension is one of the most effective tricep-building exercises that you can do because it doesn't give your muscles a chance to rest until the set is over.

The overhead version is certainly more convenient because you can do it in a standing position without a bench. So if you're training at home, you'll definitely want to do an overhead extension using a kettlebell.

On the other hand, given that lying kettlebell tricep extensions require less core strength, doing a kettlebell tricep press on a bench likely makes more sense for maximizing hypertrophy because you can focus purely on your triceps.

The downside of the lying version is that you can't monitor your form in the mirror, which means that your elbows could be flaring out without you realizing it.

So, in the final analysis, both types of kettlebell tricep extension (and their variations) have their pros and cons. If you want to be able to keep an eye on your form, stick with the overhead extension. But if you'd like to focus purely on your triceps, then the lying extension is likely a better choice.

The differences, of course, are relatively small. What matters most is that you train consistently and progressively (increase the resistance when you can, and seek to improve your form).