Discover the 5 pros and cons of kettlebell skull crushers. 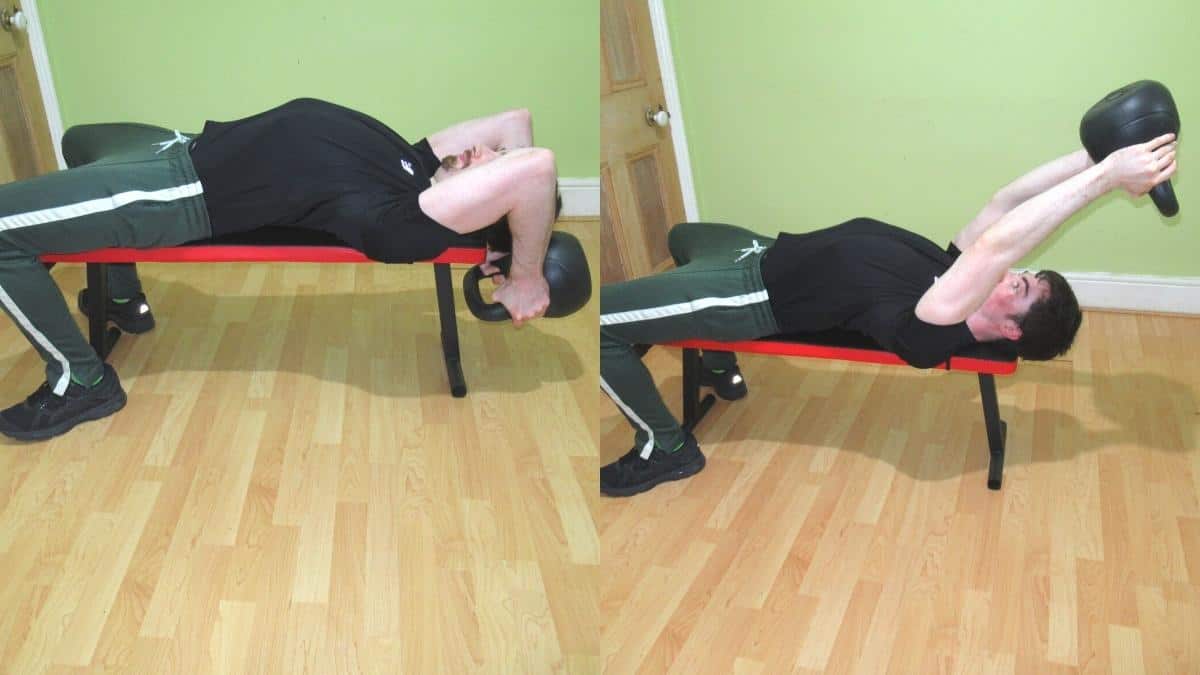 As such, your more muscular arm won't dominate the movement because it couldn't help your weaker aside even if it wanted to (since your stronger arm is already lifting its own kettlebell).

This guide explains the benefits of the kettlebell skull crusher and shows you how to perform it for the best results in both triceps hypertrophy and elbow safety.

How to do kettlebell skull crushers

Like the decline skullcrusher and incline bench skull crushers (or any other exercise, for that matter), there are pros and cons to the kettlebell skull crusher that you need to consider before including the movement in your workout routine.

The kettlebell skull crusher is an excellent exercise for building overall arm mass because it trains all three heads of the triceps—lateral, medial, and long. This ensures that your triceps look well-developed from all angles.

Better yet, kettlebell crushers, when performed correctly, actually give extra emphasis to the long head. The long head is by far the largest of the three tricep heads because it makes up the bulk of your inner arm mass.

So if you want your t-shirt sleeves to get tighter, then make sure to allow plenty of shoulder movement as you perform the kettlebell skullcrusher because, unlike the other two heads, the long head of the triceps is responsible for shoulder extension as well as elbow extension.

Accentuating the backward shoulder movement during the eccentric phase of the rep creates an incredibly intense triceps stretch and helps to alleviate much of the pressure on your elbows joints.

Now that's what you call a tricep training double whammy.

Like the alternating skull crusher, the kettlebell skull crusher helps you to sculpt symmetrical triceps because you have to lift each weight independently.

This ensures that both your stronger and weaker tricep get similar amounts of work and therefore grow roughly in proportion.

Having proportional triceps will boost your compound lift performance because you'll be able to lift the weights more evenly (e.g., the bar won't become as lopsided when you bench press if you can reduce your triceps size asymmetries).

Just note, however, that your larger tricep may still get more tension even if you train in an isolateral fashion with kettlebells.

This is because most lifters naturally have a stronger mind-muscle connection with their dominant arm. So if you really want to hone in on each of your triceps, then performing the single arm skull crusher is your best bet because it enables you to train each arm completely separately.

Unlike Smith machine skull crushers, there's no need to load weights onto a bar when you perform a kettlebell skullcrusher. This makes your workout shorter and means that you don't need to run around the gym looking for barbell collars.

But what if you don't have a weight bench?

Well, you don't need one!

You can do kettlebell floor skullcrushers instead. So even if you're training at home with minimal equipment, you can still enjoy the benefits of kettlebell skullcrushers.

Also, since you're using kettlebells—i.e., an isolateral training implement—you don't need to worry about keeping any kind of bar straight because each arm will be lifting its own kettlebell/weight.

As effective as the kettlebell triceps skull crusher is for building mass, it can be hard to gain strength on a regular basis because the weight increments between kettlebells tend to be quite large.

This is in direct contrast to cable skull crushers because cable machines typically increase in very small, manageable increments.

So if you want to gain strength as efficiently as possible, then you probably shouldn't make kettlebell skull crushers your primary exercise.

But you never know; you or your gym might have access to a kettlebell set with small weight jumps.

In this case, kettlebell skull crushers are just as effective as their dumbbell and cable counterparts.

Con: May hurt your wrists

Like some variations of plate skullcrushers, the kettlebell lying skull crusher forces your hands into a pronated position for the entire duration of the set. This is a highly unnatural position to have your wrists in when there's no weight involved, so just imagine how uncomfortable you'll feel when you add some kettlebells into the mix!

For this reason, you're best off performing kettlebell skull crushers for high reps or not at all. While you might not experience any wrist discomfort from this exercise, many lifters do, and you don't want to increase your risk by lifting too heavy.

You can, of course, do reverse grip skull crushers with kettlebells to lessen the wrist discomfort. But then you run the risk of dropping the kettlebells onto your face and turning the exercise into a literal skull crusher!

Conclusion: Should you do skull crushers with kettlebells?

The kettlebell lying skull crusher is an excellent exercise that ticks virtually all of the boxes.

Kettlebell skull crushers are a great movement for building proportional triceps because they force you to lift each weight independently. As such, both of your arms have to perform the same amount of work, which can help to reduce any tricep muscular imbalances that might have.

The kettlebell skull crusher is also a highly convenient exercise because you don't need to spend any time loading weight discs onto a bar.

Similarly, you don't even need a bench to perform kettlebell skull crushers because you can easily do them on the floor.

The only downside, in fact, is that the kettlebell skullcrusher forces your hands into full pronation, which can put a lot of pressure on your wrists if you're lifting a significant amount of weight.