Discover how a small rolling modification transforms tricep extensions from average to mass-building. 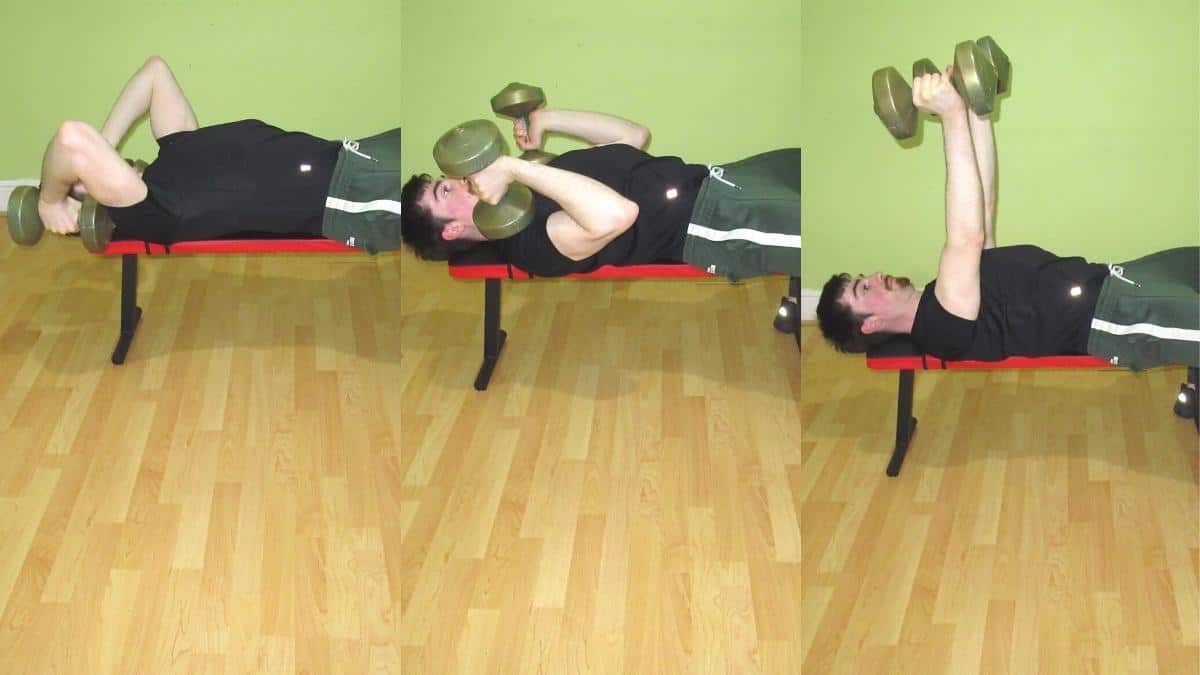 Due to the triceps brachii origin and insertion, you need to perform exercises like the rolling tricep extension, which combines elbow extension with shoulder flexion, if you want to maximize your triceps development.

We spoke about this fact of anatomy in our guide to the lying EZ bar triceps extension. But essentially, since the long head of the triceps crosses the shoulder joint, you need to move the weights behind your head in order to put your triceps under the best possible eccentric stretch.

This guide shows you how to do a rolling dumbbell triceps extension with the optimal tricep-building technique and then discusses the benefits of the exercise, which you can look forward to when you perform rolling tricep extensions on a consistent basis.

How to do a rolling dumbbell triceps extension

If you don't have access to dumbbells but still want to build triceps mass, then the rolling band triceps press is the way to go.

The movement is similar to a regular band tricep extension in terms of setup; the difference is that you're allowing extra shoulder flexion at the top of every rep in order to increase the recruitment of the long head of the triceps.

Make sure to take a couple of steps away from the band's anchor point so that you have resistance from the very first inch of movement. In other words, you don't want the band to be loose when you begin your reps; you want to increase the so-called “potential energy” within the band by stretching it.

From there, simply extend your triceps until your elbows are completely locked out. Contrary to popular advice, you should lock out your triceps on every rep (rather than performing partials for "constant tension" purposes) because the primary function of the triceps is elbow extension, which is to say, locking out the elbow joints.

Then, after extending your elbows, reverse the motion by bringing the bands behind your head. But as you do, allow your shoulders to move up and back as well. This little addition to the exercise will dramatically increase the recruitment of the long head—which is the biggest head of the triceps and thus the most crucial for gaining size—because you're training both of the long head's functions (shoulder extension and elbow extension) by allowing some backward shoulder movement.

We actually instruct people to perform the lying dumbbell extension in a very similar way to the rolling triceps extension in order to keep the stress off their elbows and put more tension on their triceps.

Yet, due to the added complexity of moving your shoulders back and forth during every rep, there are a few critical rolling DB extension mistakes that you need to watch out for if you want to achieve the best results.

While this technique can certainly still get you results, it's not optimal for a few reasons (though it can help you to learn the proper form initially).

First off, by splitting the rep into two phases during the eccentric, you automatically lose the ability to take advantage of the rolling tricep extension's natural stretch reflex during the concentric because your lifting tempo is so slow.

Second, you're just weakening yourself by slowing down your reps.

Sure, splitting rolling triceps extensions into two distinct phases can help you to learn the proper form if you're a beginner, but it's far from optimal for overloading your triceps.

And considering that the triceps are in excess of 65% fast-twitch, you really want to be overloading them with as much resistance as they can handle (though you should probably still stick to 8+ reps on extensions to keep your elbows out of trouble).

Being fast-twitch muscles, you need to perform your reps at least somewhat explosively if you want to maximize your triceps muscle growth and strength development.

Allowing too much forward elbow movement

Allowing a liberal amount of backward shoulder movement—as much as your rotator cuff mobility can handle—during rolling tricep extensions and the rolling band tricep press really helps to put the long head under a growth-stimulating stretch.

However, you don't want to bring your elbows past their initial position during the concentric phase of the rep. Otherwise, you'll take tension off your triceps and turn the exercise into a pullover instead (great exercise, but it's not for triceps specifically).

The rolling dumbbell tricep extension is highly conducive toward mass gain because the stretch reflex enables you to overload your triceps with more resistance than a regular tricep extension in which your elbows remain stationary.

However, you should still be in complete control of the lifting motion.

You shouldn't just let the weights drop; you should control the eccentric with your triceps and then lift the weights via elbow extension, the primary triceps function.

Similarly, even if your triceps can handle low rep sets (6 reps or below), that doesn't mean that your elbows will have the same tolerance for low rep training.

As such, your best bet is to stick to sets of 8-15 reps so that you don't put excessive amounts of torque through your elbows. Save the low rep training for your compound presses, where the tension is shared over more joints.

Rolling DB tricep extensions are a massively underrated exercise that's been building better arms for those in the know for decades. Here's what you can look forward to when you perform the exercise regularly and with the proper form.

Many lifters lower the weights directly to their forehead or nose during tricep extensions; then they wonder why their elbows hurt.

With rolling dumbbell extensions, you're distributing the torque and stress over two joints (shoulders and elbows) rather than just one.

This training style is very likely to lead to better long-term elbow health than lowering the weights to your head because your shoulders are acting as a buffer between the torque exerted by the weights and your elbow joints.

The triceps account for two-thirds of your upper arm mass. So if you want to increase your arm size, then you need to prioritize triceps training as much as possible.

The rolling dumbbell triceps extension, as we established, is one of the most effective mass-building exercises for the triceps because it allows you to overload the target muscles with high amounts of resistance due to its natural stretch reflex.

As such, it should be the first tricep exercise in your routine due to its proven mass-building potential. You want to be able to train the movement when you're at your freshest and strongest so that you can lift the heaviest weights possible. And that's not going to happen after your triceps are already pumped into oblivion from pushdowns.

Like the rolling band triceps press, the rolling dumbbell extension hits all three heads of the triceps via elbow extension.

But, crucially for mass gain, the rolling triceps extension gives extra emphasis to the long head by putting it under a skin-splitting eccentric stretch, which is the phase of the rep where most of the muscle fibers get broken down.

Best of all, this massively enhanced long head activation doesn't come at the expense of lateral or medial head recruitment, so it's not like you need to do tons of different exercises to work each head separately.

Ultimately, for overall triceps development, rolling triceps extensions are just about the most effective exercise out there.

A massive bench press and a monster overhead press both require titanic triceps, and you certainly don't get that kind of development from high rep kickbacks.

Yet, the rolling tricep extension is especially effective because, in essence, it's a lockout isolation exercise for the triceps.

And what better way to get stronger at compound presses than by doing heavy lockouts with the triceps, the muscle that's most responsible for the bench press lockout?

Conclusion: Who should do the rolling dumbbell extension?

Anyone who wants to make their triceps bigger and stronger should do the rolling dumbbell triceps extension on a weekly basis, either after your compound presses or at the start of your arm workout.

In addition to training all three heads of the triceps excellently, the rolling tricep extension is especially effective for developing the largest of these heads—the long head—by placing it under a massive eccentric stretch by way of a swift roll of the shoulders.

Involving your shoulders in the movement, even if not directly as a prime mover, helps to reduce the torque going through your elbows, which in turn makes the exercise safer for your joints and thus more suitable for heavy lifting.

Considering that the triceps is a fast-twitch muscle that responds particularly well to heavy weights and lower reps, rolling tricep extensions are close to optimal for hypertrophy.