We tried every type of lying dumbbell extension: Here are the 8 best variations. 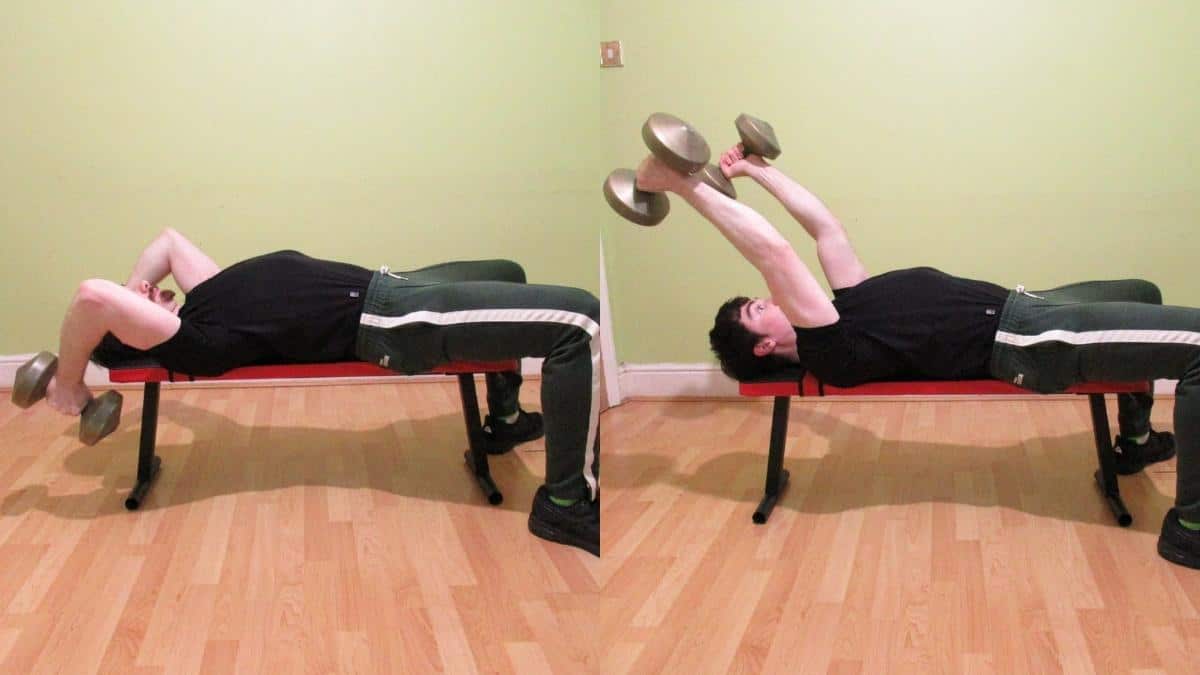 The dumbbell lying tricep extension is a helpful exercise for building a strong, balanced body because you have to lift each weight independently. This means that your stronger side can’t dominate the movement—even if it wanted to—because it’s already preoccupied with lifting its own dumbbell.

How to do a lying dumbbell extension for your triceps

Lying dumbbell triceps extensions train all three heads of the triceps—the long head, the lateral head, and the medial head.

Due to the necessary shoulder movement during the exercise, however, the lying DB tricep extension gives extra emphasis to the long head of the triceps by combining shoulder extension with elbow extension.

This is why you’re likely to feel an intense stretch in the inner part of your upper arm, especially when you lower the weights deep behind your head.

Lying DB extensions are an excellent mass-building exercise for your arms because they put the largest head of the triceps—the long head—under what you would have to term a skin-splitting stretch.

But that’s not the only muscle-building advantage of DB lying tricep extensions. As you’ll soon learn, the lying DB extension is capable of building triceps that are symmetrical and powerful as well as big and muscular.

Lying dumbbell tricep extensions are an effective exercise for developing symmetrical triceps (in terms of strength and size) because you have to lift each dumbbell independently.

Therefore, your stronger triceps muscle can’t dominate the movement because it has to lift its own weight.

Of course, you might still have a better mind-muscle connection with your dominant arm, so lying dumbbell extensions aren’t a cure-all for muscular imbalances.

The only drawback is that you can’t lift as much weight on lying dumbbell tricep extensions as you can on the barbell version because dumbbells are harder to stabilize. So if gaining maximum mass is your primary goal, then you might want to include both versions in your routine.

You know how the triceps account for two-thirds of your upper arm size?

Well, it works a similar way with the long head of the triceps.

The long head, which resides on the inner part of your upper arm, makes up roughly two-thirds of your triceps mass.

So if you want to increase your arm size, then maximizing your long head development should be your first priority because it’s the biggest single muscle head in your upper arm.

The catch is that you need to train both of the long head’s functions—simultaneously—if you want to achieve optimal rates of growth.

Since the long head crosses the shoulder joint whereas the lateral and medial heads don’t, you need to perform exercises that permit shoulder movement in conjunction with elbow extension.

So rather than keeping your elbows stationary during dumbbell lying triceps extensions, roll your shoulders back slightly as you lower the dumbbells behind your head.

Allowing some backward shoulder movement will drastically intensify your triceps stretch and deliver much more potent anabolic signaling because you’ll be recruiting more muscle fibers. In other words, performing the dumbbell lying triceps extension correctly is a recipe for muscle growth.

While any tricep training drill can increase your compound pressing power to an extent (all else being equal, a bigger muscle is a stronger muscle), isolation exercises that require more stabilization have a better carryover to your compound presses.

As such, if you want to maximize your bench press and overhead press strength, then you should choose accessory lifts that also require a large amount of involvement from your stabilizer muscles.

The lying dumbbell extension is particularly effective in this regard because it gets you accustomed to locking out unstable loads, which is to say, free weights.

Similarly, because you have to lift each dumbbell independently, you’re also ensuring that both of your triceps receive equal amounts of work.

So by developing triceps of equal strength, you’ll be able to lock the weight out more effectively during your compound presses because the bar won’t become lopsided now that you have fewer muscular imbalances.

There are more than six different ways to perform a dumbbell lying extension. Each version has its own benefits and drawbacks, which you’ll learn about now in these mini-tutorials.

The one arm lying tricep extension is the ultimate exercise for sculpting strong, symmetrical triceps because you have to lift each dumbbell separately.

So not only can your stronger triceps muscle not assist your weaker triceps muscle, but you can also work on your mind-muscle connection by training each side separately.

In other words, because you no longer have to split your focus across two limbs, you’ll be able to establish a stronger mind-muscle connection with each of your triceps and enjoy a more potent pump as a result.

The only drawback is that your sets will take roughly twice as long to complete. So while single arm lying DB extensions aren’t ideal if you’re pressed for time, they’re invaluable if you want to maximize your triceps symmetry and rid your arms of muscle imbalances.

The alternating dumbbell lying triceps extension is a good middle ground between one arm lying DB tricep extensions and the two-arm version that you saw in the initial tutorial.

With the alternating variation, you’re training each arm in turn, which means that you don’t have to split your focus as much by lifting both weights together.

The exercise is also more efficient because you’re training your arms back-to-back rather than in a completely separate manner.

Moreover, since each of your triceps gets a short rest after each rep, you’ll actually be able to perform more total repetitions during each set because your triceps will be less fatigued.

The only downside is that it can be difficult to track your reps as you’re lifting. I recommend counting total reps rather than reps per arm because it’s more straightforward.

The incline dumbbell extension is a top-quality tricep-building movement because it forces you to lower the dumbbells well behind your head (otherwise, they could hit the bench), which naturally means that your triceps get put under an intense, growth-provoking stretch.

Some lifters might feel more rotator cuff strain during the incline version because of the higher torso angle. On the contrary, in the lying version, the torque is mainly going through your elbows. But when you do the exercise on an incline bench, your shoulders are taking a lot of the strain as well.

It’s also possible that you could get stuck with the dumbbells behind the bench if you train to failure. As such, this might not be the best type of lying DB extension for you if you like to push yourself to the limit during your workouts (which is not all that hard to do on isolation exercises).

Performing the decline dumbbell triceps extension is a great way to train your triceps because the sloping angle of the bench encourages you to lower the weights behind your head and really take advantage of the intense triceps stretch that lying dumbbell extensions naturally provide.

Yet, to do the exercise as effectively as possible, you ideally need a decline bench that has foot holders so that your core strength isn’t the limiting factor.

Of course, this might be a lesser issue if you’re only using a moderate or shallow decline. But still, when you’re training for hypertrophy, having extra stabilization is usually better for activating the target muscles.

If you don’t have a weight bench (or if they’re all in use at the gym), then you can do a floor dumbbell tricep extension instead.

Performing a lying dumbbell extension on the floor is, of course, more convenient if you train at home because you literally just need a pair of weights and nothing else.

The trade-off is that your range of motion is restricted by the size of the dumbbells and the length of your arms. So while this reduced range of motion might actually enable you to lift heavier weights, it also cuts the eccentric part of the rep short and reduces the all-important muscle stretch as a result.

On the positive side, touching the weights to the floor during every rep helps you to create a standardized range of motion that you can use to gauge your progress.

In other words, when you increase the resistance, you’ll know that it’s because your triceps are getting stronger (and not because you’re reducing the range of motion) because you’re consistently lowering the weight to the same point—the floor.

The dumbbell lying twisting triceps extension is similar to the pronated tricep extension in that you finish the rep with your palms facing forward.

Some lifters believe that twisting during the rep intensifies the peak contraction.

But from an anatomical perspective, this can only be false because, as elbow extensors, the triceps and their activation aren’t affected by different hand positions.

So it’s likely just a case of people squeezing their triceps harder in anticipation of what they think will be an enhanced peak contraction.

If anything, using a pronated grip is worse because it can put extra pressure on your wrists. So take advantage of dumbbells and stick with the neutral grip.

The cross body tricep extension forces you to lift each weight separately, which encourages your triceps to grow in proportion.

While your sets will take longer to perform when you do the lying DB extension in a cross body fashion, the small amount of extra workout time will likely be worth the upper arm symmetry improvements for those heavily into bodybuilding training.

The only downside of the exercises (especially if you have big pecs and shoulders) is that the range of motion can often be quite small.

You can, of course, lower the dumbbell past the side of your body to extend the range of motion. However, doing this would demand more shoulder stability and could put more strain on your rotator cuffs, so the juice probably isn't worth the squeeze.

Conclusion: Should you do the lying dumbbell tricep extension?

If you want to strengthen your triceps with equal amounts of resistance, then making the lying dumbbell tricep extension part of your arm routine is a great idea.

Unlike its barbell counterpart, the dumbbell lying triceps extension ensures that each of your triceps receives the same amount of work because the exercise forces you to lift each weight independently.

And, because you’re using dumbbells, your wrists are naturally in a joint-friendly neutral position that keeps the tension on your triceps rather than on your connective tissue.

The lying dumbbell extension is also highly accessible because you don’t need to load any plates onto a bar; you just grab a pair of weights and start training your triceps.