How to do a stability ball lying triceps extension with dumbbells

Here are 4 beginner-to-advanced variations of the stability ball tricep extension. 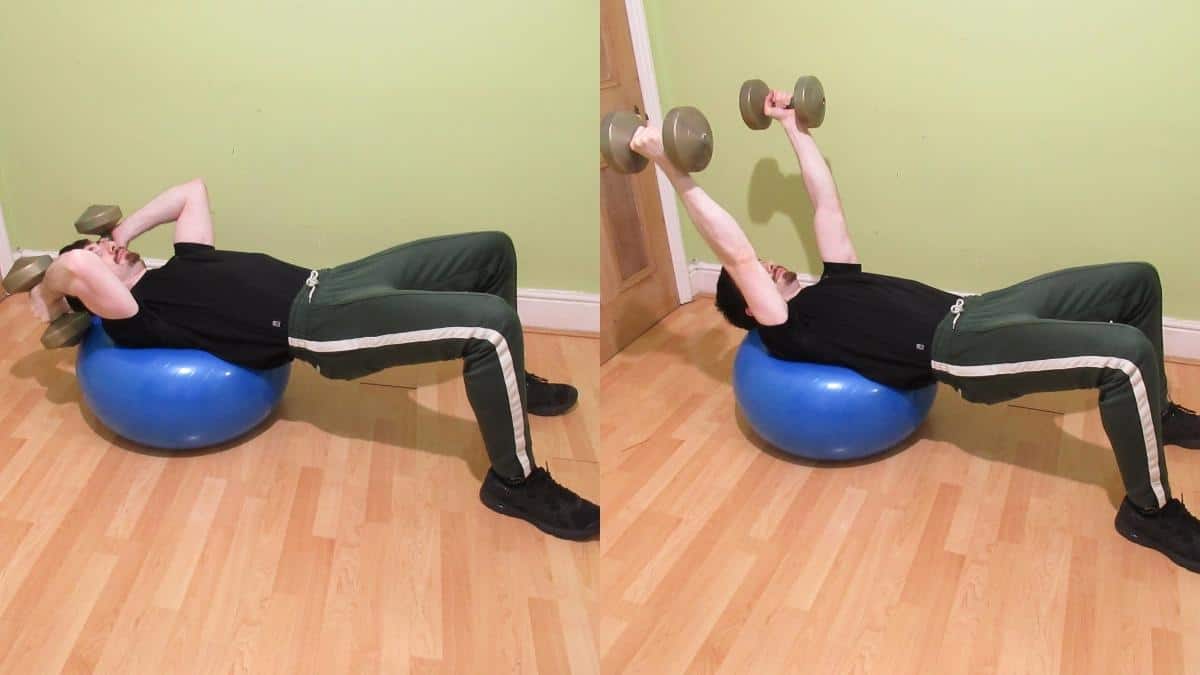 Due to the triceps anatomy, in which the long head of the muscle acts on the shoulder joint, you need to perform exercises like the stability ball tricep extension where you're lowering the weights behind (or to the sides of) your head if you want to get the best results.

Compared to, say, a pushdown exercise, you'll immediately notice that Swiss ball tricep extensions generate a much more intense stretch in your triceps. This is because by placing your shoulders in flexion (i.e., by moving them in the direction of your head), you're putting the largest head of the triceps—the long head—under a superior eccentric stretch.

This guide shows you how to do different types of stability ball lying DB tricep extension (as well as the overhead variation). So regardless of whether you're an absolute beginner or a seasoned workout warrior, you're guaranteed to find an exercise that's appropriate for your ability level.

How to do a stability ball lying triceps extension

Besides tricep lying extensions on a ball, there are three additional variations that you can do to train your triceps, which you can find below in order of difficulty (easiest to hardest).

If you're just starting out with exercise in general or tricep extensions in particular, then this stability ball dumbbell tricep extension is likely the best place for you to begin.

You'll need a light aerobic dumbbell that you can hold with both hands. Rather than grabbing the actual handle in the middle of the weight, you're going to be holding each end of the dumbbell with each of your hands.

So make sure to find a weight that's small enough to fit in your hands.

From there, you simply assume the lying position specified in the initial tutorial. But rather than lowering the weight directly to your face, as many people suggest, a better idea is to bring the dumbbell just behind your head.

The second option is, of course, slightly safer because you won't slam the weight into your face (though the first option is also okay if your technique is good).

More importantly, from an arm-toning and muscle-building perspective, bringing the weight behind your head rather than to your face intensifies the eccentric stretch and gives your triceps a better workout.

Swiss ball dumbbell overhead tricep extensions require less core stability than the lying variation and are thus ideal if you want to focus purely on training your triceps.

You'll also need better shoulder mobility to do the overhead variation because your shoulders will be in a higher degree of flexion. It's the same story with the seated two arm dumbbell extension.

The stability ball overhead tricep extension is customizable in the sense that you can lift one dumbbell with both hands, two separate dumbbells, or even just one dumbbell at a time.

The latter option is most recommended for isolating each of your triceps because it's easier to focus on the working muscles when you only need to move one limb at a time.

If you'd rather get your workout over and done with, however, then you'll want to stick with the first two options because they enable you to train both arms together, which shaves off some workout time.

To perform overhead extensions on a stability ball, grab a pair of weights (or just a weight) with a neutral grip and sit on the ball with an upright torso (no slouching forward). Begin by pressing the weights over your head. Then, lower the dumbbells behind your head until you feel a strong stretch in the back of your arms (likely when your lower arms touch your biceps). After that, you simply reverse the motion by flexing your triceps until your elbows reach lockout.

If you want to challenge your triceps and ensure that both of your arms are receiving a similar amount of work, then the one arm stability ball triceps extension is the exercise for you.

In terms of technique, this single-arm variation is exactly the same as the two-arm version. The only difference, of course, is that you're training each arm separately, which is particularly helpful for reducing your tricep muscular imbalances and strength disparities.

Again, you'll want to lower the weight to the side of your head and in a backward direction so that you can put the all-important long head of your triceps under a good eccentric stretch.

Start with your weaker arm so that you can give it the most attention.

How can Swiss ball tricep extensions benefit you?

Performing tricep extensions on a ball is not like doing them on the bench; the exercise is easier to set up, and your core muscles get a better workout.

From a muscle-building perspective, you could argue that this is a positive thing because it enables you to focus purely on training your triceps.

Yet, core strength shouldn't be overlooked because, unlike having bulky arm muscles, core strength is incredibly important for your everyday life and independence.

As such, it's often beneficial to work your core whenever you can so that you get accustomed to using your muscles in synergy rather than in isolation.

Stability balls don't require much space, and you can easily deflate them in between workouts to reduce their footprint significantly. Reflating your exercise ball is also a breeze if you have even a semi-decent pump.

Weight benches, on the other hand, are undeniably useful (just like an exercise ball), but they don't typically collapse into a small footprint. As such, they can often become an unwelcome permanent fixture in your home.

Stability ball tricep extensions are also pretty simple to perform once you get the hang of the exercise. This means that you can focus on strengthening your muscles rather than on learning some complicated workout technique.

It's scalable to your ability level

Unlike the full body tricep extension, Swiss ball triceps extensions are suitable for almost anyone.

Beginners can start by performing extensions with a single dumbbell, which requires less stabilization than using two separate weights.

Intermediate or advanced strength trainees, on the other hand, can increase the difficulty by holding a separate weight in each hand. This places a greater demand on both your triceps and your abs.

You can also choose how much of your core you want to involve in the movement. For example, to keep the focus more or less on your triceps exclusively, you can do a Swiss ball overhead extension.

Of course, since you're sitting on a somewhat unstable service, doing overhead extensions on a ball will still provide your abdominals with some stimulation.

Alternatively, if you want to give your core a good isometric workout, then you can do a Swiss ball dumbbell lying tricep extension instead.

Conclusions: Should you do dumbbell tricep extensions on a stability ball?

If you want to strengthen your triceps and tone the back of your arms, then the stability ball tricep extension is an excellent exercise for the job.

The movement is easy to set up because all you need is a Swiss ball and a pair of weights. So you can still benefit from the exercise even if you work out at home rather than in a gym.

Additionally, when you perform stability ball tricep extensions in a lying position, you can give your core muscles a good workout because you'll be using them to keep your torso straight.