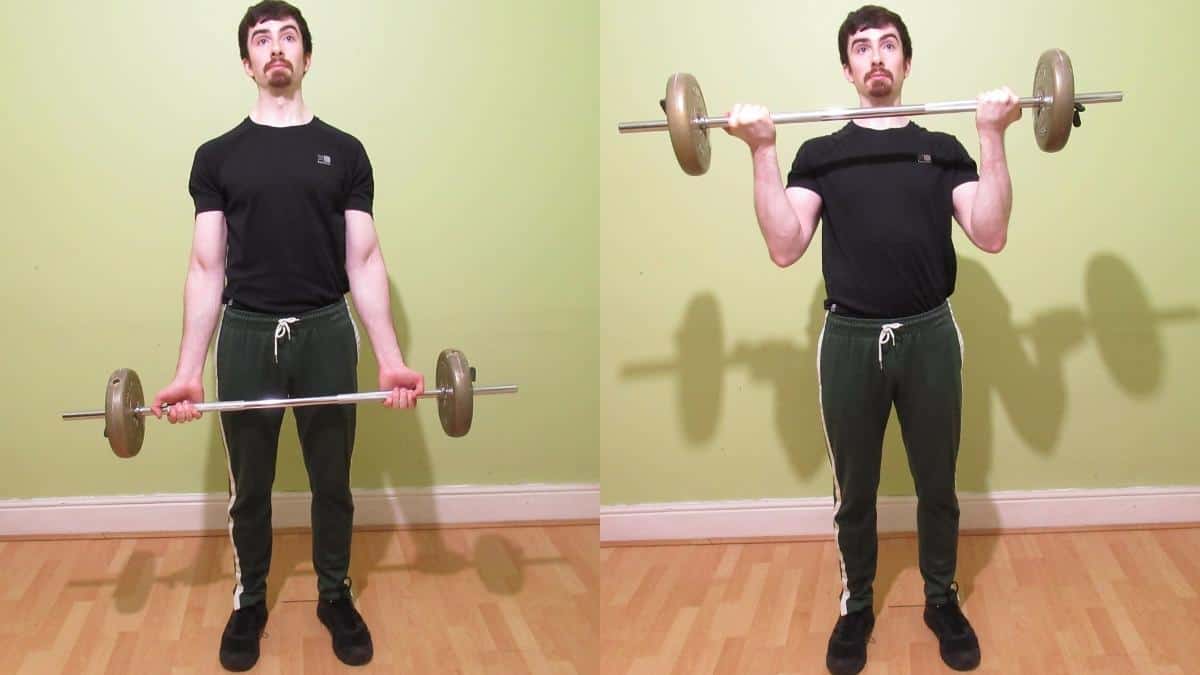 Knowing that the primary biceps brachii function besides elbow flexion is forearm supination, you can maximize your bicep stimulation by performing exercises that train both of these functions simultaneously.

The straight bar bicep curl is one such exercise, as is the wide grip barbell curl, the topic of today's article.

The truth is that most of the best barbell bicep exercises can build slabs of muscle mass. However, few movements enable you to lift as much weight as the wide-grip standing barbell curl does. Hence, it's arguably the single most effective drill that you can do to stimulate new size gains.

The wide-grip barbell curl is better than the narrow grip barbell curl in many respects because it enables you to lift heavier weight and thereby overload your biceps with more resistance. Yet, there are also a couple of downsides to the exercise, which may make it unsuitable for some lifters.

The short (inner) head of the biceps is the part of the muscle that everyone sees when you flex your arms. It also makes your upper arms look wider when it's well-developed. Contrastingly, if your short head (or really, either head) is underdeveloped, then your arms can often look thin and stringy rather than thick and full.

Performing the wide grip barbell bicep curl is a convenient and highly effective way to bring up the inner head of your biceps and improve the aesthetics of your arms. The key is to use a comfortably wide grip rather than the excessively wide hand positions that you sometimes see others use.

Wide barbell curls are also useful because they build the biceps as a whole and thus help to develop the overall bicep mass that all bodybuilding enthusiasts crave. After all, it's not like you can completely isolate particular heads of the biceps.

Emphasis on certain muscular regions, on the other hand, is totally possible. For example, performing preacher curls with a wide grip will shift more of the tension onto the inner muscle fibers of your biceps. In this regard, the bent over barbell concentration curl is much the same, except it produces an even stronger peak contraction but a comparatively worse stretch.

The majority of lifters will be slightly stronger on wide grip standing barbell curls than on the regular version. Part of this is likely due to the fact that the range of motion is a bit smaller when you use a wider grip; hence, you can lift more weight.

But this increased strength doesn't just make you feel accomplished; it also leads to more muscle growth—theoretically—because you can overload your biceps with heavier resistance.

Well, you might well be lifting more weight, but as mentioned, using a wide grip naturally reduces the range of motion a bit because the bar has less distance to travel, which might plausibly recruit fewer muscle fibers and thus stimulate less muscle growth.

Moreover, many lifters tend to perform the wide-grip barbell curl in a straight up and down motion rather than in an arc, which reduces the range of movement even more.

In the end, wide grip barbell curls may indeed lead to more muscle growth via extra overload. Or they might not. The difference between the regular and wide grip version is small, to begin with, so just pick your favorite and start lifting.

Some gym-goers find the wide-grip standing barbell curl very awkward to perform, especially if they have unique anthropometry.

On the other hand, many people just copy other lifters, which often means using an excessively wide grip. So if you're guilty of gripping the bar at its end rather than just outside of shoulder-width, bring your hands in a bit and see if that helps you to feel your biceps working.

You can also do wide grip bicep curls with an EZ bar if the regular barbell hurts your wrists.

Is the wide grip standing barbell curl worth your while?

The wide grip standing barbell curl is an undeniably effective mass-builder for the biceps. By holding the bar outside of shoulder-width, you can shift the emphasis onto the inner muscle fibers of your biceps while still stimulating the other parts of the muscle in order to develop overall size.

Experiment with your hand spacing to get the most from wide grip barbell curls. Most lifters will find that less is more and that holding the bar just outside shoulder-width helps them to feel their biceps working more than an extra-wide grip does.

You can definitely go heavy on the wide grip barbell curl as long as you lift with the correct technique. It's a good idea to start with heavy sets and then bring your grip in and bump up the reps later on in your workout so that you recruit a wide range of muscle fibers.