How to perform alternating cable curls for your biceps 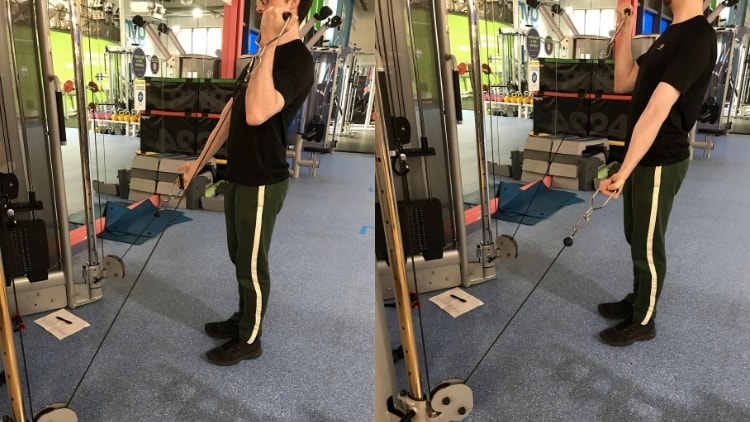 The bicep anatomy has two main functions; forearm supination and elbow flexion. Any exercise that trains these two functions simultaneously, such as the standing bicep cable curl, will get you those bicep gains sooner or later if you're consistent in the gym.

However, sometimes you just need to switch things up so that your workout routine doesn't become stale. Moreover, certain exercises, such as alternating cable curls, can actually improve the symmetry of your upper body because they ensure that both of your biceps receive equal work.

How to do alternating cable curls

Cable alternating curls are easy to set up and perform once you learn the correct technique. But they also have an array of benefits that make them extra effective when it comes to building the biceps.

Nobody wants a physique that looks asymmetrical. But that's what can happen if you lift a lot of barbells or straight bars. In order to correct any bicep muscle imbalances that you currently have or to prevent them from cropping up in the future, it's critical to include some kind of unilateral exercise in your arm routine. [1]

The cable alternating curl is an excellent example of such an exercise.

Since you're working each arm independently, you can ensure that both of your biceps receive equal work. In other words, there's no danger of your dominant arm taking over the movement because it couldn't help your weaker side even if it wanted to.

See our post on the difference between a cable curl and a barbell curl if you want to learn more.

When you only have to focus on stretching and contracting one bicep at a time, you can naturally put more effort into each rep and create a stronger muscle pump. This leads to an improved mind-muscle connection that carries over to your other exercises as well because alternating cable curls really get you used to flexing each bicep as hard as you can.

And if you think about it, flexing a muscle is exactly what bodybuilding is about. So whether or not you desire to compete as a physique athlete, you can still benefit from unilateral exercises like the cable alternating curl because they improve your ability to keep tension on the working muscle.

You can also do the alternating preacher bicep curl if you want to focus on your form by bracing your arms against the support pad.

Standing alternating cable curls can certainly build mass if you lift heavy enough. But because your arms are positioned behind you during the exercise, the movement naturally emphasizes the long (outer) head of the biceps, which is a key shoulder stabilizer and the area that most lifters need to bring up. [2]

Therefore, you can make your arms look more defined from all angles by bringing up your outer head with cable alternating curls. The key is to make sure that you extend your elbows at the end of each rep so that your biceps receive a full stretch and thus enough stimulus to grow bigger.

The alternate incline dumbbell curl provides a great stretch since it has you curl with your biceps behind your body, which naturally places the muscle in a lengthened position.

There are three variations of alternating cable curls, each of which has its pros and cons. The first type, which we explored in the first part of this article, is the most popular version. However, for the best results, it's recommended to try all the variations before picking one to include in your bicep cable workout so that you can see which feels the most comfortable.

Seated alternating cable curls are virtually identical to the variation that you saw in the first part of this article— except for the fact that you're performing them sat down. The benefit of the seated position is that you don't have to worry about stabilizing your core because your back is braced against the bench. As such, it's likely the best version if it's pure bicep isolation that you're after.

The downside is that you have to wheel an adjustable bench to a cable machine, which isn't always feasible if you train at peak gym times. If this is the case, then you can save time by doing a simple dumbbell alternate curl with free weights instead.

Again, this drill is very similar to the first. The difference is that you're facing the machine and curling with your arms in front of your body rather than letting them drift behind your torso. Due to this position, you're emphasizing the short (inner) head of your biceps when you perform standing alternating cable curls facing the machine.

The downside of this one is that it requires more core strength because the weights are always going to be trying to pull you toward the machine.

You can also click the link to learn the difference between cable curls and dumbbell curls if you're looking to find the ideal exercises for your own workout program.

Are alternating cable curls better than the regular version?

Alternating cable curls have many benefits that the regular bicep curl doesn't offer. For example, this movement builds more symmetrical biceps because you get to stretch and contract each arm independently, which may also improve your mind-muscle connection.

The main downside is that you need access to two sides of a dual pulley to make the exercise work. This setup isn't always possible in busy fitness facilities, but if you have the means to perform it, then I definitely recommend giving the cable alternating curl a go in your next workout.