Switch up your hammer curl rhythm for faster arm development. 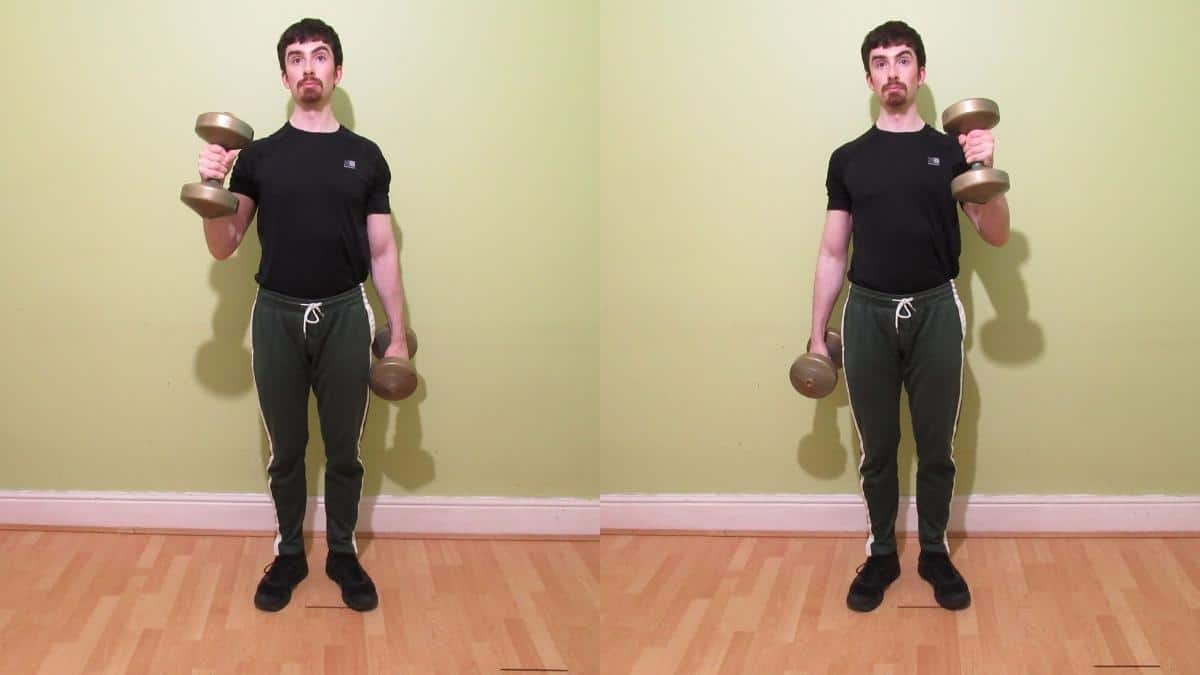 Alternating hammer curls are an excellent exercise for building the bicep brachii because they enable you to lift more weight than any other type of hammer curl.

Also, by performing alt hammer curls instead of regular hammer curls, you'll naturally improve your mind-muscle connection to a greater extent because you only need to focus on working one arm at a time.

But before we get onto the complete list of benefits, let's see how to perform the alternating hammer curl correctly.

How to do alternating hammer curls

You can perform seated alternating hammer curls to better isolate your biceps by taking your core more or less out of the equation. Alternatively, you can stick with the standing variation for greater convenience (no need for a bench) and better abdominal stimulation.

Alternating dumbbell hammer curls can build some serious arm size when you perform them correctly. However, if you do this exercise with sloppy form, then you'll be sacrificing your muscular development and potentially causing yourself an injury.

Ego lifting is by far the most common mistake that you see in the gym. And it's particularly prevalent among those who perform alternate hammer curls. Why?

Because the alternate hammer curl enables you to lift more weight than any other type of curl.

Hence, it can be tempting to lift bigger dumbbells than your biceps can handle when the exercise naturally lends itself to lifting relatively heavy weights.

The reason that you can lift heavier is that, unlike during cable rope curls, your arms are getting a short rest after each rep. This means that they're fresher and thus stronger by the time that the next rep comes around.

So, by all means, take advantage of this exercise's high loading potential and lift heavy. But just make sure to keep your form in check as explained in the tutorial so that you keep the tension on the target muscles, namely, the biceps, brachialis, and brachioradialis.

While you can certainly build muscle with partial reps, it's generally agreed that full reps lead to more muscle growth in the short term because they stimulate a larger amount of muscle fibers. [1]

Why just the short term?

Because everyone has a genetic potential, and if you lift for long enough—and supplement your training with a good diet and proper recovery—then you can likely attain that potential even with sub-par form.

Yet, partial reps will probably still lead to partial gains in the short term. [2]

Moreover, performing half reps naturally means that you can lift heavier weights. This is doubly bad, not just because it limits your muscle growth but also because half rep training gives you a false sense of strength.

Because "curling" heavier dumbbells doesn't necessarily mean that your arms are getting stronger if you have to use other muscles to lift them.

Pausing for too long

Pausing for a few seconds during alternating DB hammer curls and cable alternating curls is perfectly okay and should be encouraged because it allows you to lift more weight and thus overload your biceps to a greater degree.

However, at a certain point, excessive pauses can become more like full-blown rest periods.

This isn't entirely bad because you could extend the set indefinitely until your biceps reach failure, which would certainly lead to muscle growth. However, by artificially extending the set by taking longer pauses, you'll reduce your strength on subsequent sets because your arms will be more fatigued from performing the extra reps.

As a general rule of thumb, once your opposite arm has finished its rep, take a couple of deep breaths at the most before performing a rep with your other arm.

Alt hammer curls aren't as popular as the regular version (or alternating dumbbell curls). Yet, if you perform them with the correct technique, then they're just as good—if not better for building the biceps and surrounding arm muscles.

Since DB alternate hammer curls enable you to lift more weight than the two-arm version, your biceps naturally get overloaded with more tension, which will likely lead to faster rates of muscle growth.

Now, don't get too excited, because the advantage isn't huge. You can undoubtedly lift heavier on this exercise than on hammer preacher curls and the like, but the extra muscle growth probably won't be detectable to the human eye. After all, we're talking about a few pounds of extra strength.

Strong arms are essential for a variety of compound pulling movements like chin-ups, pulldowns, and rows. The great thing about alternate dumbbell hammer curls is that they train three of these critical arm muscles—biceps, brachialis, brachioradialis—simultaneously.

Therefore, you'll be able to pull heavier weights during your compound lifts now that these arm muscles are accustomed to working together.

This will also help you to build a better back because your lats and traps will naturally receive more stimulation when your arms don't give out prematurely.

In this regard, alternating incline dumbbell curls are similarly effective because they help your biceps to gain strength by getting them accustomed to handling heavy weighted stretches and intense muscle contractions.

Since you only need to focus on working one arm at a time during alternating dumbbell hammer curls, you'll obviously develop a better mind-muscle connection because your central nervous system can channel all of its force toward flexing and contracting the arm that's currently curling.

This is also why cross body curls are so effective for building the biceps—you can dedicate every ounce of energy to training the target muscles.

Should you do alternating dumbbell hammer curls?

The alternating hammer curl is a tremendous mass-building arm exercise because it enables you to overload your biceps, brachialis, and brachioradialis with more weight than traditional hammer curls.

Moreover, alternating hammer curls only require you to focus on one arm at a time. This makes it easier to keep the tension on the target muscles and thus maintain proper lifting form.