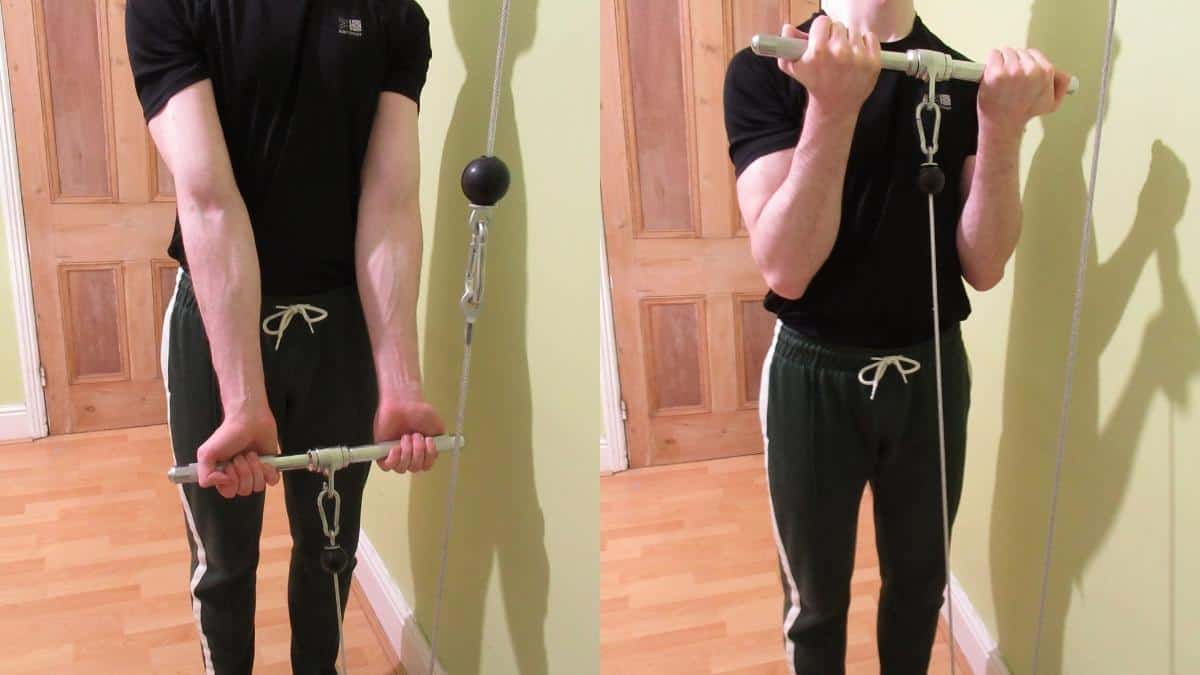 The bicep anatomy consists of two heads; on the outside of your arm is the long head, and on the inside, there's the short head. Close grip cable curls emphasize the long head (if you do them correctly) because using a narrow grip biomechanically shifts the tension onto the outer muscle fibers of your biceps.

You can do this variation of low cable curls with a straight bar or an EZ bar attachment. The latter is preferable if you have wrist problems, but it isn't feasible in every gym because the EZ bar is a less popular cable attachment.

How to do close grip cable curls

Cable close grip curls provide a powerful biceps pump and train your arms from a different angle to regular curls. However, as good as the exercise is, you need to avoid these mistakes if you want to maximize your bicep muscle growth.

For some reason, many lifters take "narrow-grip" to mean that they should curl with their hands touching. This isn't the case with the close grip barbell bicep curl or the cable version.

By positioning your hands too close together, you're reducing the ability of the biceps to contract and thus making yourself weaker. This kind of form, in turn, actually reduces your potential muscle growth because you won't be overloading your biceps with as much weight as you otherwise could by using a more moderate close grip.

The trick is to hold the bar so that your arms are still by your sides, which is to say not in front of your body. You'll learn why in just a sec.

Many gym-goers hold the bar with such a narrow grip that their arms end up in front of their body while they curl.

This is the biggest close grip cable curl mistake of the lot because by letting your arms drift forward, you're actually shifting the emphasis away from the long head of your biceps and onto the short head. This completely defeats the purpose of performing the exercise in the first place and is something that you need to keep a watchful eye on if you want to build biceps that are not only big, but proportional too.

Instead, keep the bar close to your body as you curl, and keep your arms pressed into your sides.

Shortcutting the range of motion

Research shows that the long head of the biceps, which is the prime mover in a cable close-grip curl, is most active during the first part of the range of motion. [1] So, by trying to "keep tension on the muscle" by doing half reps, you're actually taking tension off the target area and making the movement less effective.

Yet another reason to always train with a full range of motion wherever possible.

There are a variety of different cable machine bicep exercises that each have their pros and cons. Some movements, for example, provide your biceps with a strong peak contraction, whereas others prioritize the stretched portion of the rep.

The wide grip cable bicep curl, however, is the most obvious close grip cable curl alternative because it emphasizes the inner part of your biceps. The form is virtually the same. However, this time, you actually want to let your arms drift in front of your body so that you can work on the overall thickness of your biceps.

We also have some good bicep and shoulder workouts if you're looking for a body part to pair with your bis.

For example, our back shoulder bicep workout saves time by using supersets and builds mass by utilizing a variety of rep ranges and exercises.

Conclusion: Should you do close grip cable curls for your biceps?

If you have good overall mass to your biceps but feel that they're lacking the wow factor that comes from having well-developed peaks, then it's highly recommended to perform close grip cable curls so that you can develop more proportional arms.

Since you typically perform the exercise standing, you can actually lift pretty heavy on this movement because your core is in a nice strong position. However, your best bet is to stick to sets of 8-12 reps so that you can keep the tension on your biceps and avoid the temptation to lift the weight with your other muscles.