Learn how the Austrian Oak built some of the most eye-catching forearms in bodybuilding history. 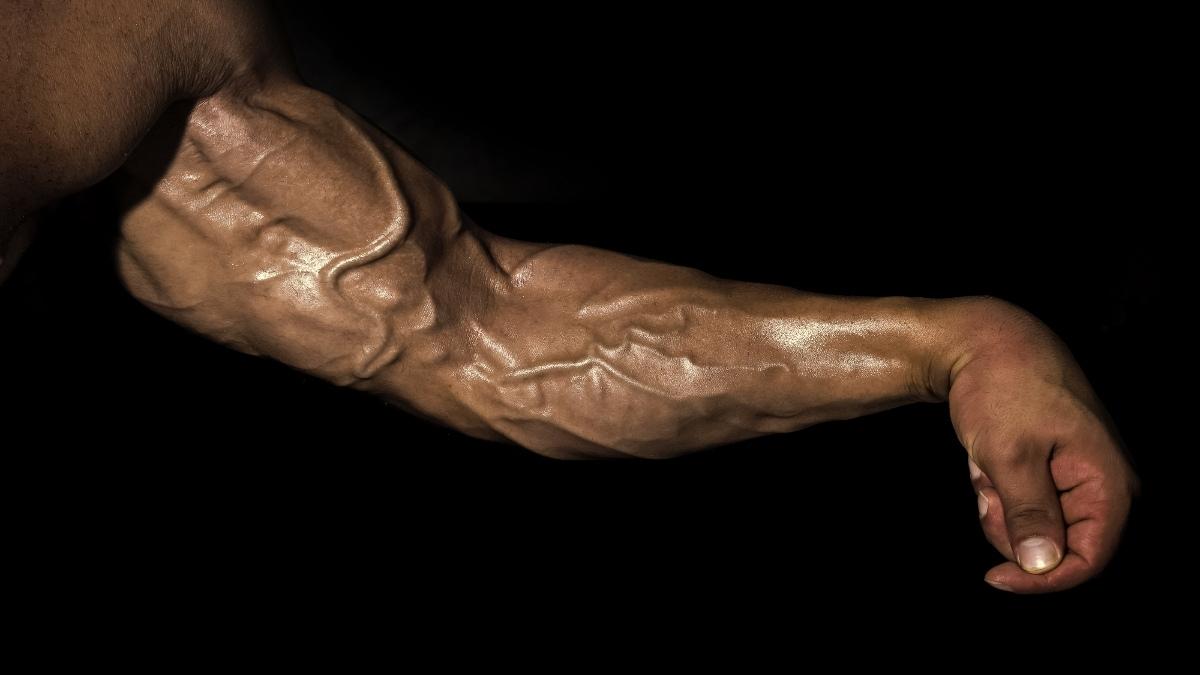 Deep down, you know it’s true. The forearm anatomy is a highly complex set of small muscles, and for maximum development, you need to do specific exercises for them.

But with so much training advice out there, who are you supposed to listen to?

While Arnold is arguably most famous for his breathtaking upper arms and charismatic personality, his forearms weren't too shabby either.

He also states clearly that you need to isolate your lower arms for the fastest and best results. So let’s get into the nitty-gritty of his advice.

What did a typical Arnold Schwarzenegger forearm workout look like?

Finding footage of an Arnold forearm workout is quite a challenge. But we’re fortunate enough that the 7-time Mr. Olympia has articulated, in writing, his interesting stance on forearm training.

He notes in an article published in Muscle and Fitness that he’s a big proponent of reverse curls because they develop the brachialis. And I have to agree. Big biceps just aren’t complete without three-dimensional forearms and a solid brachialis.

He knew this bodybuilding truth better than anyone because you simply can't hide small forearms on stage. It’s also interesting that this exercise is essentially like a compound movement for the forearms—a mass-builder, if you will.

Although Arnold did his fair share of isolation work for the pump, he never shied away from heavy barbell compounds like many bodybuilders do today.

Notice how he doesn’t just recommend a few sets of wrist curls at the end of a back workout. Unlike other people, Arnold knew the importance of training the extensors to bring up the detail of the forearms, which could be a crucial point of differentiation between you and a fellow competitor.

What rep ranges did Arnold use in his forearm workouts?

According to the article linked above, he was a fan of high rep forearm training. Specifically, he recommended sets of 12-20, explicitly noting that you shouldn’t dip below 12 reps.

And once again, it’s a pleasure to agree with him. Since wrist curls have a limited range of motion (ROM) by design, you almost need to stick to high reps if you want to get sufficient time under tension.

Also, if you start throwing around heavy weights during your forearm session, then well... you’re just asking for a wrist injury.

You can get away with ego lifting to an extent on squats and the like, but on something that uses vulnerable, small joints like the wrists, you won’t be so lucky.

Note that Arnold also recommends experimenting with rep ranges if you aren't accustomed to regular forearm training. Maybe you’ll respond better to sets of 12 rather than sets of 20?

There’s only one way to find out. Lift. Observe the soreness and results, then lift some more

What was his stance on forearm supersets?

Since Arnold Schwarzenegger pretty much invented the pump, it’s no surprise that he often did supersets of wrist curls and reverse wrist curls to engorge the forearm muscles with blood.

This is smart because few people like doing direct forearm training after a grueling upper body workout. But if you know that your supersets will speed things up, then you’ll be much less likely to skip forearm training, and your physique will thank you for it.

How did Arnold Schwarzenegger program his forearm workout?

Although Arnold Schwarzenegger doesn’t specify exactly how he programmed his forearm workouts at every point in his bodybuilding career, he does allude to some genius programming methods.

He notes how many of the best bodybuilders train their main muscles (legs, chest, back, shoulders, upper arms) in the day and then come back in the evening to work the smaller muscle groups like calves, traps, forearms, and abs.

The top bodybuilders during Arnold's era trained their main muscles in the morning and then returned to the gym in the evening to hit their smaller muscle groups.

Well, abs aren't really a small muscle group, but you get the idea.

In other words, he’s saying that you need to give the forearms the same attention that you give your other body parts. Would you just train your chest with a couple of sets of half-assed fly?

No, you wouldn’t. So if you want world-class forearms, then you first need to bring forth the dedication. Then work on your technique, and then increase the intensity.

Look at any photo of Arnold Schwarzenegger—it looks like his forearms have forearms. Much of that mass, from what I can tell, is due to an incredible combination of brachioradialis mass and forearm flexor size.

Hence one of the combos that I use is heavy reverse curls with an EZ bar and heavy barbell forearm curls. I might not have Arnold Schwarzenegger forearms, but thanks in large part to his advice, they’re not too shabby, either.