Discover how The Gift built the most eye-popping forearms in modern bodybuilding. 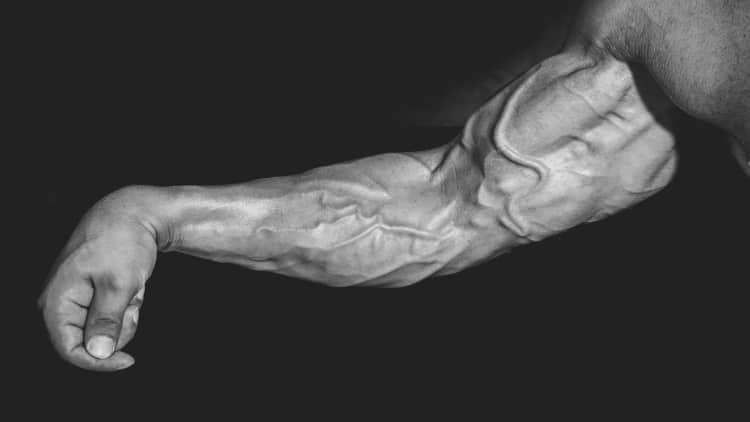 The forearm anatomy looks extremely impressive when it's fully developed. And in the history of bodybuilding, few competitors have been able to rival Phil Heath in the forearm department.

He jokingly quotes his forearm measurement when people ask him how big his arms are. And to their amazement, his forearms are often significantly larger than their upper arms.

How to get Phil Heath forearms

So, how can you get those incredible Phil Heath forearms for your own physique?

Well, he’s obviously got great genetics. But as he says, when talent works hard, the results just become crazy, which is to say, that genetics alone won’t earn you a Mr. Olympia caliber physique.

After all, it’s entirely possible that some people have similar forearm genetics to Phil Health—emphasis on some, it’s probably still a rarity. However, these individuals simply don’t have his muscularity because they haven’t put forth the effort in the gym to build the size.

Gear or no gear, you'll need exceptional forearm genetics to get lower arms like Phil Heath.

So to get forearms like those of Phil Heath, you’re going to need some crazy good genetics, yes. But you’re also going to need the discipline, not just to train hard, but to eat a calorie-dense, bodybuilding diet to support your new muscle growth.

If you’ve watched Phil Heath training forearms, then you’ll know that he doesn’t just do a few sets of wrist curls before calling it a day. He targets every area of his forearms when he's trying to add mass and detail, and it shows in his physique.

In one video I saw, The Gift says that he doesn’t always train his forearms since, like his upper arms, they’re already one of his best body parts.

This makes perfect sense since symmetry is a critical component of competitive bodybuilding. You might have the biggest muscles, but if they’re not in proportion, then you’re not going to score top points with the judges.

The practice of only training certain body parts now and again is common with many bodybuilders who have overly dominant muscle groups.

However, when it comes to the forearms, it makes perfect sense. This is because the forearms are very easy to maintain as they get worked during every back and bicep exercise that you perform.

I recommend watching the video of Phil Heath training forearms for yourself so that you can take notes on his form and training intensity. You’ll notice that he works every part of the forearm for complete development.

Interestingly, Heath starts with regular cambered bar curls and then supersets them with the reverse variation. Obviously, this setup results in a more intense muscle pump and greater workout efficiency.

But it may also stimulate faster muscle growth because by doing supersets for similar body parts, you’re ensuring that your muscles stay close to the point of failure, which is a great way to maximize your development.

He does 3 sets of 10 on each curl variation to get in plenty of volume.

Behind the back forearm curl

I’ve been doing behind the back forearm curls for ages, so my eyes lit up when I realized that Phil Heath does the same drill. This movement, which he also does for 3 sets of 10, is one of the most effective because when the bar’s behind your back, it forces you to focus on the mind muscle connection rather than just moving weight for reps.

The brachioradialis muscle on Heath’s physique is so developed that its sheer size might be hard to believe if you’re new to bodybuilding. But as the countless pictures and videos on the internet will show you, his forearms are indeed real.

So if you want Phil Heath forearm development, focus on the brachioradialis. He does both reverse curls and hammer curls, the latter being the final exercise in the routine, which he does for 3 sets of 8-12 reps.

Conclusion: Can the average guy get Phil Heath forearms?

Phil Heath definitely has freaky forearms. Even though we may never have lower arms his size, nor can we train for his genetics, we can still put his advice to good use. We still might be able to get our lower arms on the level of Sylvester Stallone’s forearms if we train consistently.

Notice how Phil Heath works all areas of his forearms. If you want full development, then you need to do the same for your forearms. I also recommend adding in some kind of reverse wrist curl to hammer the wrist extensors. But since his forearms are already so developed, I can see why he just does regular reverse curls.

James Jackson
James Jackson is a personal trainer who uses his expertise in strength and conditioning to create helpful workout tutorials that show fitness enthusiasts how to build muscle while staying safe in the gym. He draws on the latest sports science data as well as tried and tested training techniques to get the best results for his clients without them having to live in the gym.
View All Posts
Forearm Exercises

Behind the Back Wrist Curl

Best forearm exercises and workout routines for mass and strength

How to get bigger forearms fast: Here's our massive guide to building ripped lower arms

Forearm stretches to relieve pain and tightness: Learn how to stretch your forearm properly