How to do resistance band bicep curls 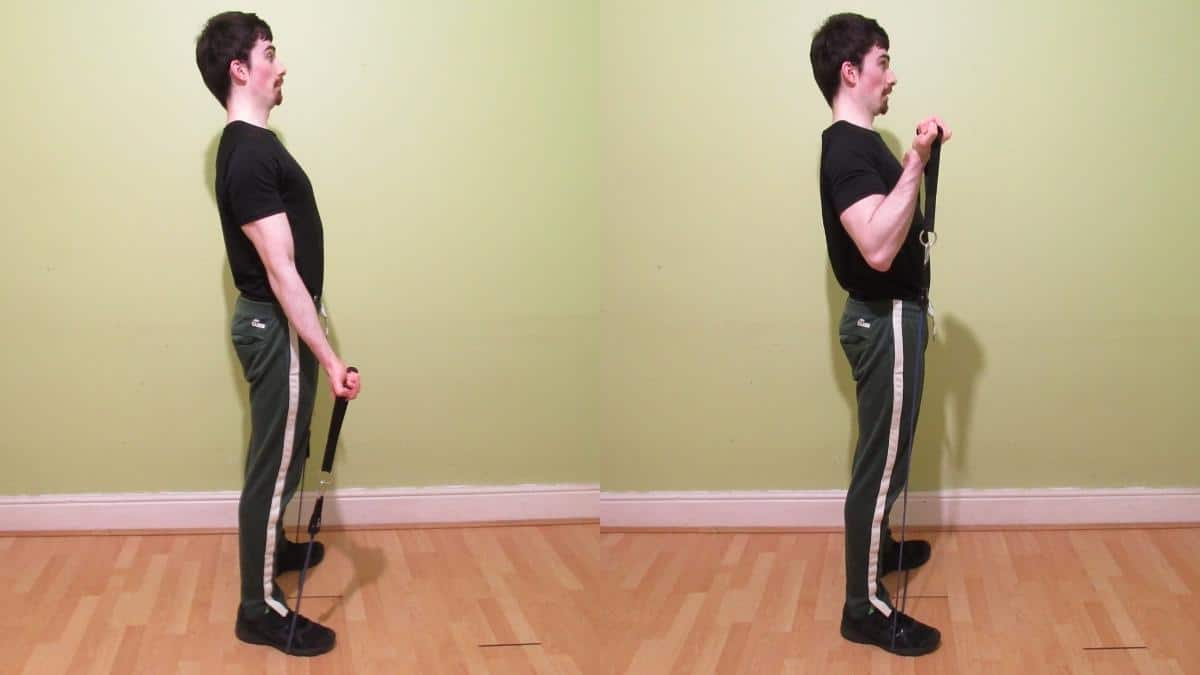 Resistance band bicep curls are a convenient and highly effective exercise for strengthening the bicep muscle. Unlike free weights, bands provide constant tension, offer greater portability, and require only minimal workout space, which is great if you train your biceps at home.

This guide shows you how to do banded curls with the optimal muscle-building form and then discusses the other resistance band biceps exercises that you can do for even greater training variety.

How to do bicep curls with resistance bands

There are numerous benefits of doing resistance band curls for your biceps in particular and your upper body in general. First off, bands are incredibly convenient and portable, but they can also build surprisingly large amounts of muscle mass on your back and biceps because they provide heavy, constant tension.

The resistance band curl really makes your biceps earn their reps because it challenges your muscles with constant tension throughout the entire set. [1]

This naturally results in a potent muscle pump because your biceps have to repeatedly contract against the tension of the band. As such, your arms will look bigger and more vascular due to the muscle cells (myocytes) [2] swelling with blood.

It's important that you don't confuse constant tension with consistent tension levels because that's not what you're getting when you do bicep curls with resistance bands.

Bands become heavier the more that you stretch them. So while the tension is constant, it's also inconsistent because the contraction portion of the rep is considerably more difficult than the initial lifting phase.

However, by wrapping the band around your feet or by stepping closer to the ends of the band, you can increase the tension levels significantly. While this won't completely change the strength curve of the exercise—it'll still be most demanding at the top of the rep—you will get better bicep stimulation by shortening the band.

Performing a bicep curl with a resistance band is highly convenient because no extra equipment is required. As such, it's one of the most effective bicep exercises for beginners who don't have any weights.

Plus, you only need a tiny training space to do the exercise comfortably.

So whether you're pumping up your biceps on the beach or squeezing in a quick session at home, you can always rely on the resistance band curl to get you those gains.

Bands are also far more portable than free weights. As such, you can easily take them in your bag while traveling or bring them to the office for a quick lunchtime workout.

This means that you don't need to risk losing some of your motivation or muscle mass by skipping workouts because you can use your bands pretty much anywhere.

If you thought that free-weight curls were the only way to build bicep mass, think again.

With heavy enough bands and good tolerance for lactic acid, you can develop just as much arm size from doing bicep curls with bands as you can with free weights.

After all, many band sets offer in excess of 50lbs of resistance these days, which is plenty of weight for a relatively small muscle group like the biceps.

There are more than 7 different types of resistance band bicep curls that you can do to build your biceps. Like the other types of arm curls, each exercise has its pros and cons and works your muscles from different angles. You can learn more about the variations of bicep band curls by reading the guides linked below.

If you have access to a weight bench or even just a sofa, then you can do the resistance band bicep curl while sitting down. The advantage is that it requires less core stability than the standing version, but the downside is that it can be hard to get enough tension unless you double loop the band because your hands are closer to the floor.

To perform it, grab some bands and sit upright on the end of a weight bench. Place your feet slightly out in front of you and then stand them in the middle of the band. Grab the handles with a supinated grip and curl them toward your front delts. Squeeze your biceps at the top of the rep and then slowly lower the handles until your elbows are locked out.

If your band doesn't have handles, or if you only have a single resistance band, then you can most definitely still blast your biceps. You just need to be slightly more creative.

Prepare for this variation of the band bicep curl by double looping your band. So rather than wrapping it around your foot once, you're going to do it twice to increase the tension.

With your foot on top of the band, grab the other end with an underhand grip, and then hold it by your side. Curl the band toward your shoulder by moving your forearm toward your biceps. Flex your biceps forcefully at the top of the rep and then lower the band under control until your arm is fully locked out. Repeat the movement with your other arm and do 3-5 sets of 12-25 reps per side.

To maximize the peak contraction during these elastic band curls, you can actually move your shoulders and elbows forward slightly as you complete the concentric portion of the rep. This is because the biceps anatomically assist with shoulder flexion, so by allowing a bit of deltoid movement, you'll also make the bicep muscle contraction more intense.

Band curls are an excellent addition to any biceps circuit training program because you can do all of the exercises with the exact same band. So you don't need to waste time and energy getting other equipment in position.

Conclusion: Should you do bicep curls with bands?

Performing resistance band bicep curls is a convenient and accessible way to build your arms. Bands are dirt cheap these days, and because you can use them anywhere, you don't need to commute to crowded gyms just to wait for machines to become available.

The resistance band bicep curl is naturally a much more portable exercise than its free weight counterparts. So even if you're out of the house for work or travel, you can still squeeze in an effective training session by doing bicep curls with bands rather than with other kinds of weights.