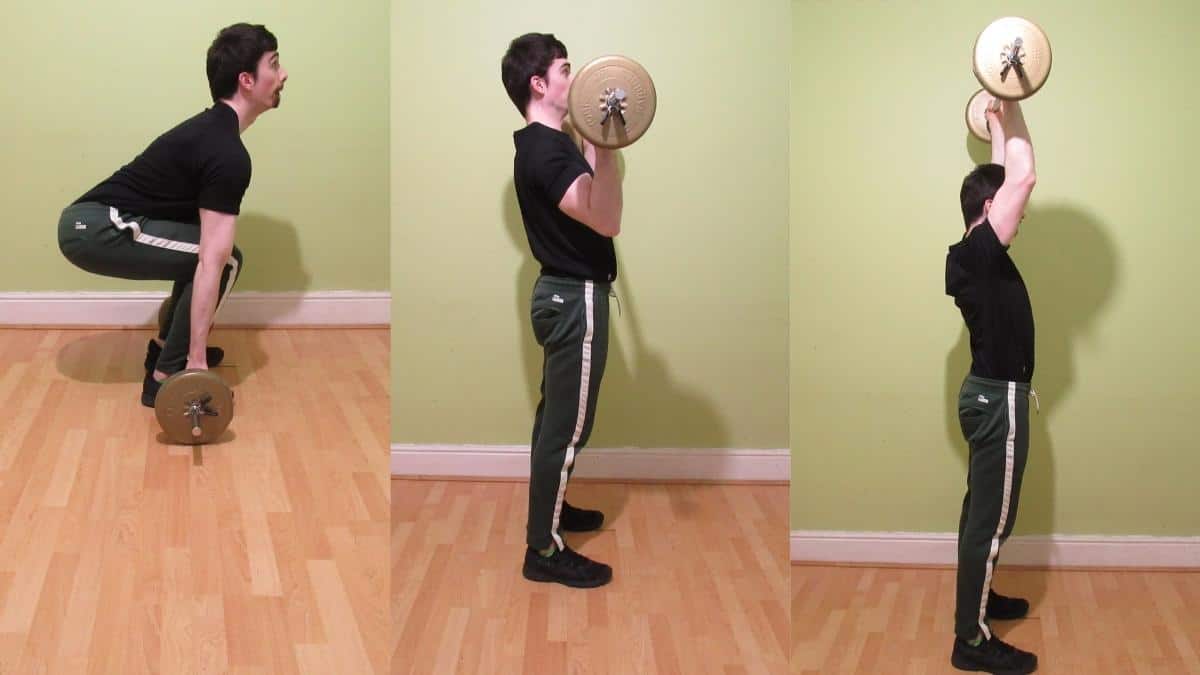 The dead curl press works the bicep muscle in addition to the glutes, hamstrings, quads, abs, back, shoulders, triceps, and forearms. In other words, it's the ultimate full-body resistance training exercise. And because it activates so many muscles, it's highly effective for increasing your calorie expenditure and thus promoting accelerated fat loss.

How to do a dead curl press

The dead curl press utilizes more muscles than just about any other strength training exercise, making it the undisputed king of compound movements. It's a brilliant exercise for working your shoulders and biceps on the same day.

It's well known that compound movements burn more calories than isolation exercises. So if you want to kick up your metabolism and get yourself on the fastest fat loss path, then you should base your training around full-body exercises like the deadlift curl press. [1]

Of course, you still need the dietary discipline to eat healthily and in a manner that's appropriate to your goals. For example, you can do as many sets of the dead curl press as you like, but if you're still consuming more calories than you're expending, then you're not going to lose weight.

But if you combine the dead curl press with sufficient calorie restriction, then you'll have a potent fat loss weapon at your disposal that you can use during cutting phases (if you're a bodybuilder) or just to generally get in better shape.

The dead/curl/press is an intense, time-efficient exercise for sculpting a lean, toned physique. That's right, performing this movement alone isn't going to turn you into a mass monster, which may actually be a good thing depending on your physique goals.

Nonetheless, if you don't want to get too bulky but still want to look lean and muscular, then the deadlift curl press is your best friend because it provides enough resistance to gain muscle, but not so much that you'll end up looking like a bodybuilder.

To be sure, the dead curl press provides plenty of overload for your biceps. However, since nobody can curl as much as they can deadlift or overhead press, your legs and shoulders will never get enough resistance for mass gain if this is the only exercise you're doing for them. This is much the same with the dumbbell curl and press, except that your legs aren't getting worked at all in that exercise.

For preserving muscle mass, however, the dead/cur/press is definitely a viable option. Just don't make it your primary exercise if you want to get jacked.

If the thought of spending hours on the treadmill fills you with dread, then you can do the deadlift curl press instead.

The dead curl press is a fun yet undeniably intense way to burn fat and improve your cardiovascular conditioning that doesn't require an expensive outlay for bulky cardio machines, which is ideal if you train at home.

The trick is to perform your reps as explosively as possible to give your cardiovascular system the best possible workout. Don't get me wrong, you still want to control the weight, but you certainly shouldn't be performing slow negatives or anything like that. The aim is to lift the bar as fast as possible while still remaining in complete control of it.

You can also do some leg and arm exercises like the ball squat curl to press if you want a more quad-focused full-body movement that also gets your heart pumping and your biceps burning.

Alternatively, to really tax your core, you can do the kneeling biceps curl to overhead press instead.

Doing the dead curl press dumbbell style is an excellent idea if you have muscle imbalances that you want to correct or if you want to limit the chance of them occurring in the future.

The technique is virtually the same as it is for the barbell version. The only difference is that you're holding the dumbbells by your sides—with a neutral grip—rather than in front of your thighs with an underhand grip.

In short, you're going from a neutral deadlift to a supinated curl to a pronated shoulder press.

This variation challenges your stabilizer muscles in general and your core stability in particular to a greater extent than the barbell version. This is because your brain now has to focus on balancing two weights rather than just one. [2]

Conclusion: How to maximize your deadlift curl press results

If you want to maximize your calorie expenditure and thus your fat loss potential, perform the deadlift curl press with a barbell. This will enable you to focus on performing your reps as explosively as possible rather than on stabilizing the weight.

On the other hand, if you want to improve your core stability, then do the dumbbell dead curl press instead. This version still burns plenty of calories because it's a full-body movement. However, it's ideal for athletes and functional training enthusiasts because it places a greater demand on your stabilizer muscles.