How to do a kneeling curl to press for your biceps

Have you tried these 4 kneeling curl to press variations yet? 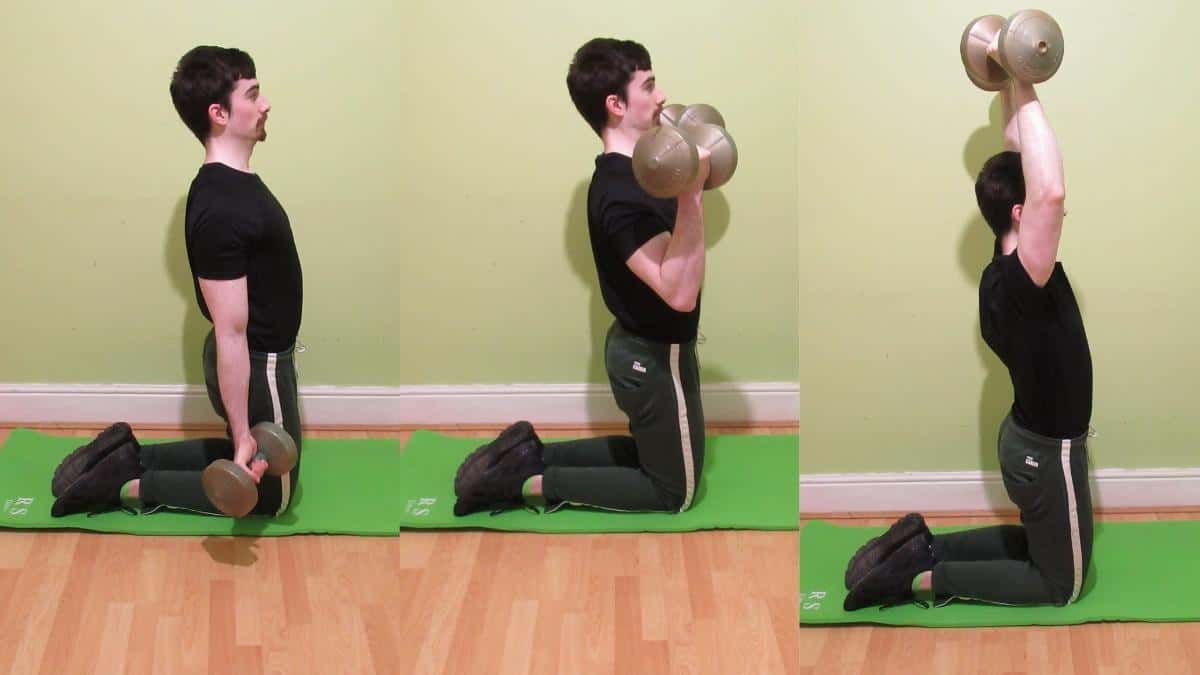 Due to the anatomy of the biceps brachii, the biceps actually assist with shoulder flexion. So on an anatomical level, performing the kneeling curl to press exercise makes perfect sense because you're maximizing your bicep muscle recruitment by involving your deltoids.

And on a practical level, the kneeling biceps curl to overhead press is a fantastic exercise for not only building your biceps and strengthening your shoulders, it's also great for helping you to develop a rock-solid core.

How to do a kneeling curl to press

Now that you know how to do the tall kneeling curl to press with the optimal muscle-building form, it's time to explore the other three variations that you can do to work your biceps, abs, and shoulders from a different angle.

Half kneeling dumbbell curl to press

The half-kneeling dumbbell curl to press will bulk up your biceps and strengthen your shoulders without taxing your core to such a large extent, which, depending on your point of view, may or may not be a good thing.

For those who want to gain functional strength, the reduced core stability requirement of the exercise is obviously a negative.

Nonetheless, the half kneeling dumbbell curl to press is still a good accessory lift for when your core is fatigued from all of your other compound movements.

On the other side of the coin, using your leg for stabilization purposes and thus giving your abs a break will enable you to lift slightly heavier weights and therefore overload your biceps and deltoids with more resistance.

You can also do a barbell curl to overhead press if you're looking for an exercise that still works your abs and develops functional strength but which doesn't have your core muscles as the limiting factor.

The one arm kneeling curl to press is a brilliant drill for improving your balance and core stability because your abs and obliques need to contract to prevent your torso from tipping over to one side.

If it's your first time performing the exercise, then you can stick with the half-kneeling single-arm dumbbell curl to press before switching to the tall kneeling version so that you can get accustomed to the movement.

If you want to work your legs as well as your upper body, then you can do a squat curl press with dumbbells to challenge your entire body and cardiovascular system.

So if you want to do the exercise as explosively as possible, then your best bet is to perform both the curl and press parts of the lift with a neutral grip so that you don't have to rotate your wrists.

In this, the movement is very similar to the hammer curl to overhead press. The only difference being, of course, that you're performing this variation in a kneeling position to increase your core activation.

Doing the deadlift curl press is also a good way to train multiple major muscle groups at once. The only downside is that it's best done with a barbell, which means that the setup time will be longer since you can't just grab a pair of weights from the rack and start lifting like you can with the kneeling curl to press.

Conclusion: Who should do the kneeling bicep curl to overhead press?

Anyone who wants to improve the size and strength of their shoulders, biceps, abdominals, and obliques can benefit from performing the kneeling bicep curl to overhead press.

The trick is to maintain a really rigid core so that you have a stable base to press from. In practice, this means flexing your abs and glutes to keep your upper body from swaying around under the weight of the dumbbells.

Of course, you can perform this exercise with kettlebells as well, which is actually recommended if you're doing the single-arm version.