Torch your fat and blast your biceps with the squat curl press. 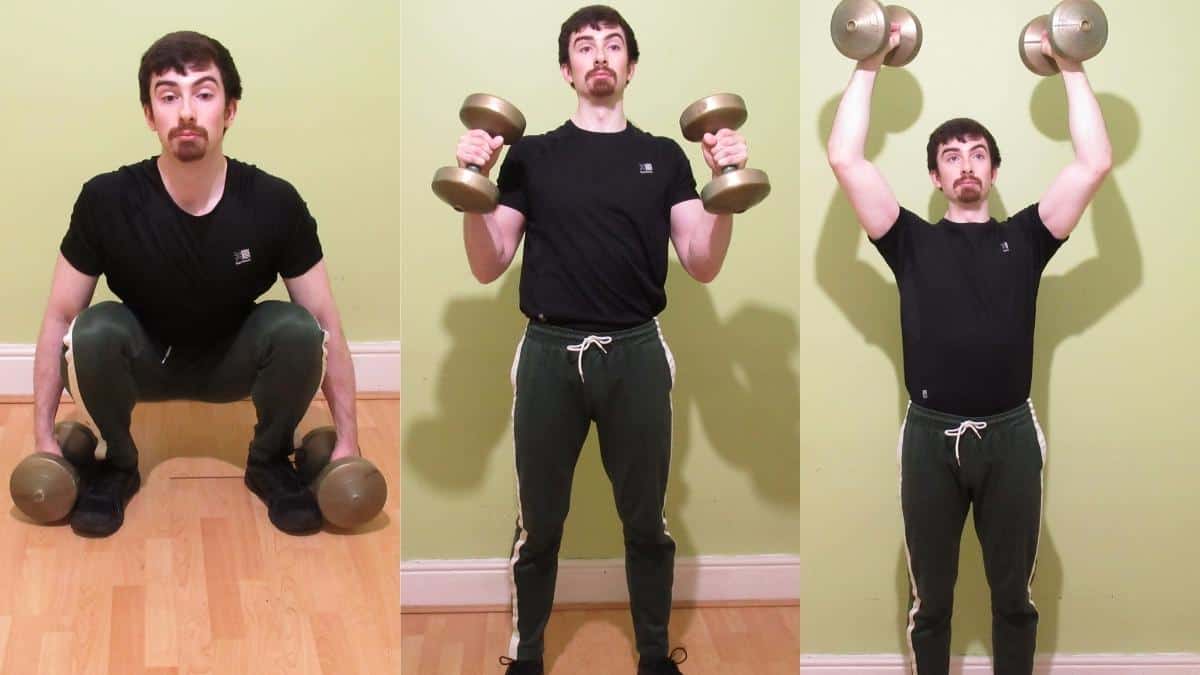 The squat curl press works the biceps brachii muscle as well as the shoulders, triceps, and legs. So if you want to get a great full-body workout while burning plenty of calories in the process, then the dumbbell squat curl press is an excellent choice.

How to do a dumbbell squat curl press

If you want to work one leg at a time, then you can do the dumbbell walking lunge with biceps curl. While this exercise requires more lower body strength than the squat version, it's helpful if one of your legs is stronger than the other.

Likewise, you can do a reverse lunge with bicep curl to shift the emphasis onto the legs, but this time onto your glutes more so than your quads.

If you've already mastered the standard squat with a bicep curl exercise, then the dumbbell squat curl press is the next logical progression. But there are also two variations of this exercise (one easier, one harder) that you can do to work your muscles from different angles and add variety to your workout routine.

The two arm ball squat curl to press is a helpful exercise if you don't yet have the leg strength to do multiple reps of squats in quick succession. Using the ball will help you to lower your body in the squat phase of the rep while also ensuring that you maintain a nice upright posture.

As for the technique, it's exactly the same. The only difference, of course, is that you have the support of the ball behind your back.

This variation has you hold the dumbbells close together with a neutral grip. So when you squat down, you want to push your knees apart and let the dumbbells hang in front of you.

The squat part of this exercise is more demanding than in the regular version because you're using a wider stance (This naturally makes it one of the best bicep exercises for women because it has such a big glute focus).

However, because you're holding the weights with a neutral grip, the curling motion is easier because now you have your brachioradialis to help your biceps lift the weights.

In this regard, it's similar to doing a hammer curl into a shoulder press but with the extra squat component thrown in.

To perform the sumo squat curl to press, hold two dumbbells with a neutral grip and take a wide stance with your feet flared out slightly. With the dumbbells in front of your body, squat down by breaking at the hips and pushing your knees out. Once your knees reach a 90-degree angle, push yourself back up, and then immediately curl the dumbbells toward your chest. Then press the weights overhead straight after.

Finish the rep by bringing the weights back down to your chest and then lowering them back to the starting position, which is to say, when you're stood up straight with the dumbbells in front of you.

The dumbbell squat curl press really gets your heart pumping and your muscles burning. For this reason, it's an effective exercise for anyone who wants to tone up, improve their cardiovascular fitness, or lose some body fat.

Since you're activating so many different muscles with this movement, it's excellent for increasing your calorie expenditure, which can help you to shed the pounds.

Of course, the squat curl to press is also highly functional. So if you want to improve your full-body coordination while building muscle in the process, you can do this exercise with a heavier pair of dumbbells to really challenge yourself by training your legs and biceps on the same day.

And if you're completely new to this kind of drill, you can opt to start with the ball squat curl to press before easing yourself into the self-supported version. Having the stability ball behind your back encourages you to squat with good posture and helps you to perform a controlled descent so that you don't drop too fast.