How to do a deadstop French press

Here are 3 dead stop French press variations that will power up your triceps. 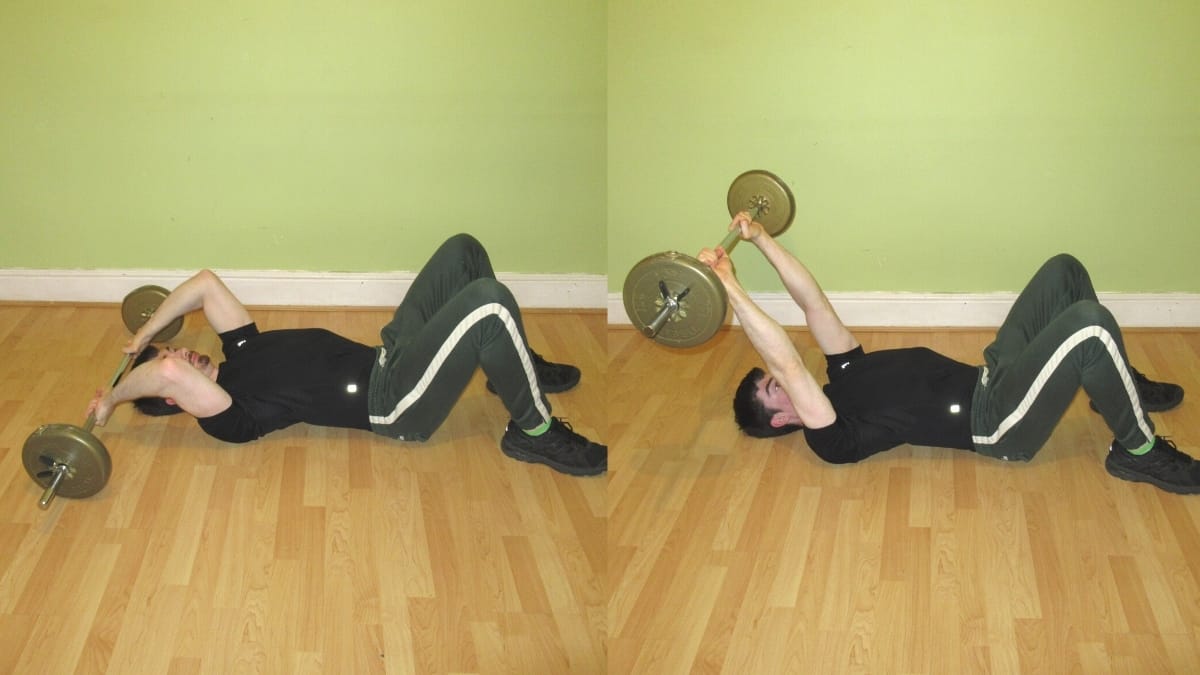 In our guide to triceps anatomy, we mentioned that the triceps have a dual function (elbow extension and shoulder extension) and that achieving optimal development in both size and strength necessitates training both of these functions.

Well, that’s precisely what the standing French press does—it puts your arms in an overhead position and then makes you perform an elbow extension exercise.

But you can make the French press even more challenging by performing it in a lying position from a dead stop. This deadstop setup ensures that you’re not lifting the weight with any momentum, which means that the movement has particularly good carryover to the powerlifting-style bench press, where you have to pause the bar on your chest before pressing it.

This guide shows you 3 different ways to do a deadstop French press and explains the pros and cons of each variation.

How to do a deadstop French press

Here are two more deadstop French press variations that you can do to strengthen your triceps.

While the dumbbell deadstop French press doesn’t allow you to lift as much weight as the barbell version, it does provide more equal triceps stimulation because your stronger side can’t dominate the movement when you’re lifting two independent weights.

Performing a dead stop French press with dumbbells, as you would expect, has excellent carryover to any kind of dumbbell press.

But since stabilizing two independent dumbbells is more challenging than balancing one barbell, the DB dead stop French press also has good carryover to any upper body press that demands a lot of core stability.

The only drawback of the exercise is that if you lift the dumbbells with a neutral grip (which is recommended for keeping your wrists healthy), then the weights are likely to hit the floor before your triceps get a good stretch.

Considering that performing an extensive range of motion is crucial for both muscle growth and (true) strength development, your best bet is to stick with barbells if you’re serious about the deadstop French press.

If lifting a straight bar puts too much pressure on your wrists, then you can do the deadstop EZ curl bar French press instead.

EZ bars have curved, semi-pronated grips, which are naturally much easier to hold than the non-existent grips on straight bars. After all, you don’t walk around with your palms facing completely backward; your hands are either in a neutral or semi-pronated position the vast majority of the time.

Before we get into the benefits of the dead stop French press, here’s a quick pro-tip: Use small weights plates for the deadstop French press so that you can train your triceps over a more extensive range of motion.

If you use 45 lb plates, then your triceps won’t get much of an eccentric stretch, which is arguably the most critical part of any lift when it comes to stimulating hypertrophy.

Instead, use the smallest plates that you have access to that still fit on the bar.

Of course, if you’re really strong, then you might not be able to use 2.5 lb plates because you wouldn’t be able to fit enough of them on the bar in order to overload your triceps. But you get what I mean. Use the smallest possible weight discs so that you can take full advantage of the dead stop French press’ eccentric stretch.

The deadstop French press is basically like doing a heavy bench press lockout with nothing but your triceps.

For this reason, the dead stop French press has excellent carryover to the bench press in general and the powerlifting bench press in particular because it eliminates your ability to generate momentum.

Just be careful that you don’t involve your lats and chest in the movement dynamically (of course, these muscles, along with your shoulders, still serve an important stabilization role).

All of the lifting and force should come by way of elbow extension, which is to say from your triceps. Follow this rule while using a full range of motion, and you’ll get excellent results if you perform the exercise consistently.

Besides boosting your pressing power, the deadstop French press increases your triceps muscularity by training all three heads of the muscle.

Since you’re bringing the bar behind your head, however, the deadstop French press actually gives extra emphasis to the biggest tricep head—the long head—by putting your shoulders into flexion, which in turn places the long head in a strong, force-producing position.

This long head activation, along with the slightly reduced range of motion compared to a regular French press, is one reason why the dead stop French press is so conducive to lifting heavy weights.

Conclusion: Should you do the deadstop French press?

If you want to increase your pressing strength and improve your lifting technique, then the deadstop French press is a great exercise to perform.

The dead stop French press increases your pressing power by making you lock out a heavy bar with nothing but your triceps.

But even if you’re not a powerlifter, the deadstop French press can still benefit you because, by eliminating momentum from the movement, it encourages you to lift with good form, which in turn ensures that your triceps are getting the full benefit of the exercise.

Just make sure to use small weights discs so that you can get a full range of motion. You don’t want the weights to hit the floor before your triceps receive a proper stretch.