How to do a standing, lying, and seated EZ bar French press

Learn how to do every variation of the EZ bar French press with the proper form. 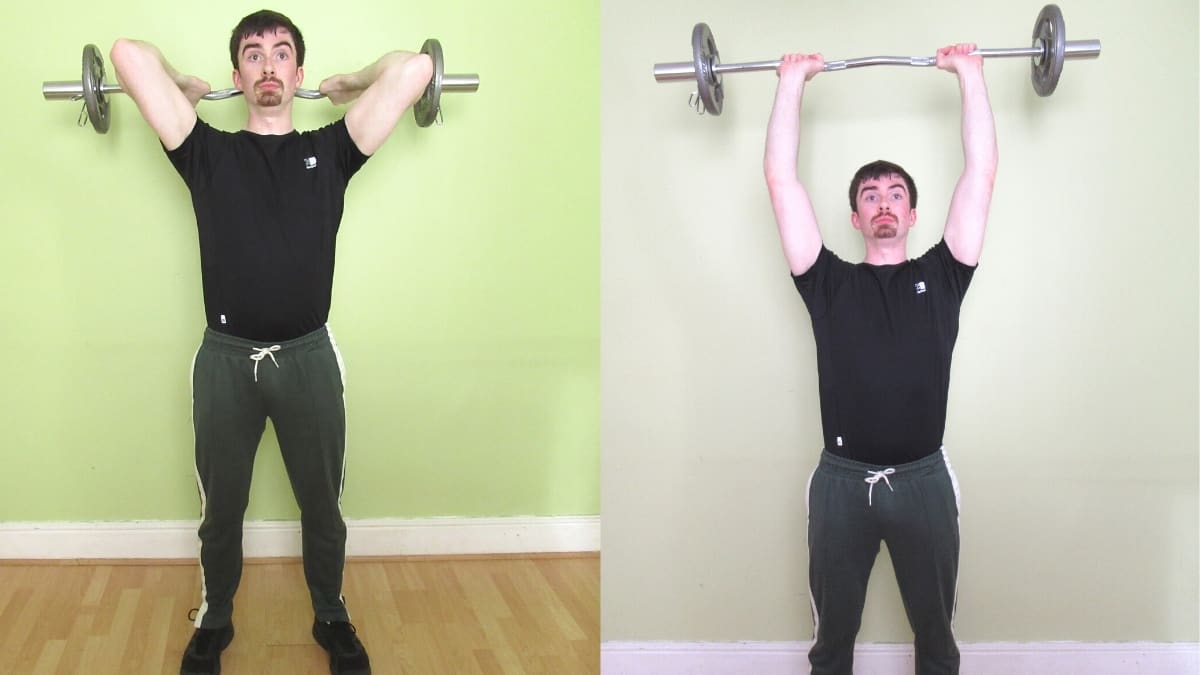 The EZ bar French press trains all three heads of the triceps muscles while emphasizing the biggest of these heads, namely, the long head, due to its overhead shoulder positioning.

Since only the long head of the triceps crosses the shoulder joint, the French press exercise has excellent mass-building potential because it trains the long head in its optimal force-producing position, which is to say, when it’s stretched.

This article shows you how to do a standing, lying, and seated EZ bar French press with the optimal tricep-building technique. After that, we’ll explore the ideal number of cambered bar French press sets and reps for triggering new muscle growth.

How to do an EZ bar French press

Learn how to perform the EZ-bar French press in seated and lying positions and discover which variation is best for building the triceps.

Performing a seated EZ curl French press is more conducive to triceps isolation than doing a standing EZ French press because when you’re sat down with your torso braced against the bench’s backrest, you don’t have to put as much effort into stabilizing your core (the bench does it for you).

As a result of not having to brace your abs so forcefully, you can channel more energy into training your triceps, which in turn enables you to establish a stronger mind-muscle connection and achieve a better workout.

Although the seated French curl burns fewer calories than the standing version (because you’re legs and core muscles aren’t as active when you’re sat down), the seated EZ-bar French press is ultimately the better choice for hypertrophy because you can lift heavier weights and thus overload your triceps with more resistance when your body is stabilized by the bench.

The only drawback is that some people struggle to get their arms all the way over their head during the seated EZ French press. If this is the case for you, then give the incline EZ bar French press a try instead because it places your shoulders in a lower degree of flexion than the seated/upright version, which in turn makes it easier to maintain the proper overhead positioning.

The lying EZ French press is similar to the decline EZ bar French press but slightly more accessible because you can do it on pretty much any weight bench.

Just make sure to bring the bar behind your head. Don’t lower the weight to your face because doing so is likely to hurt your elbows and besides, lowering the bar to your face fails to put the all-important long head of the triceps under the stretch that it needs to grow optimally.

If you don’t have access to a weight bench in order to do a lying EZ French press, then give the deadstop French press a try instead. While it doesn’t offer as much range of motion as the bench version, the floor/deadstop variation ensures that you’re not lifting the weight with the aid momentum.

The stability ball French press is also a good choice for those training without a bench. However, using a ball demands greater core stability and could impair your ability to train your triceps as a result.

While you can perform a French press with an EZ bar in a kneeling position to work your core (see our kneeling French press guide), most lifters will gravitate toward the seated version because it ensures that you’re not working your core muscles at the expense of your triceps.

That said, if you want to sneak in some extra abdominal stimulation while working your triceps, then it can make sense to do the EZ French press in a tall kneeling position.

Just know that once your triceps get fairly strong, the core strength requirement of the exercise may impair your ability to focus on training your triceps.

Whether or not this core involvement defeats the purpose of an isolation exercise like the EZ French press is up to you.

For hypertrophy training, you want your core to be nice and stable so that you've got a solid base to lift from. However, if you want to maximize your synergistic strength, then working your abs and triceps concurrently certainly makes sense.

This is, of course, a broad recommendation. The ideal amount of training volume, sets, and reps depends on your goals and, more importantly, on the rest of your workout program.

In general, however, the more advanced you are (by which I mean that your triceps are fairly close to their muscular potential—not merely that you’ve been lifting weights for years), the more total sets you should perform per week.

Additionally, if you’re training your triceps more frequently throughout the week, then you should do fewer sets per session so that you’re able to recover in time for your next workout.

As for reps, moderate or high repetitions (8-20) are most recommended because even though the standing and seated cambered French press are wrist-friendly exercises (thanks to the EZ bar’s semi-pronated grips), they’re also very elbow-intensive exercises.

The elbow is a relatively small joint, so you don’t want to load it with maximal weight unless it can share the load with other joints (as with your shoulders during a bench press, for example).

Conclusion: How effective is the cambered bar French press?

The cambered bar French press is a great exercise for those who find holding a straight bar uncomfortable but who still want to overload their triceps with plenty of growth-stimulating resistance.

Overall, the EZ bar French press is a highly effective mass-building movement for the triceps. Just be sure to use a full range of motion to get the best results; performing complete reps really does make a noticeable difference in size gains.