How to do a standing and seated dumbbell French press

Learn how to do 4 DB French press variations. 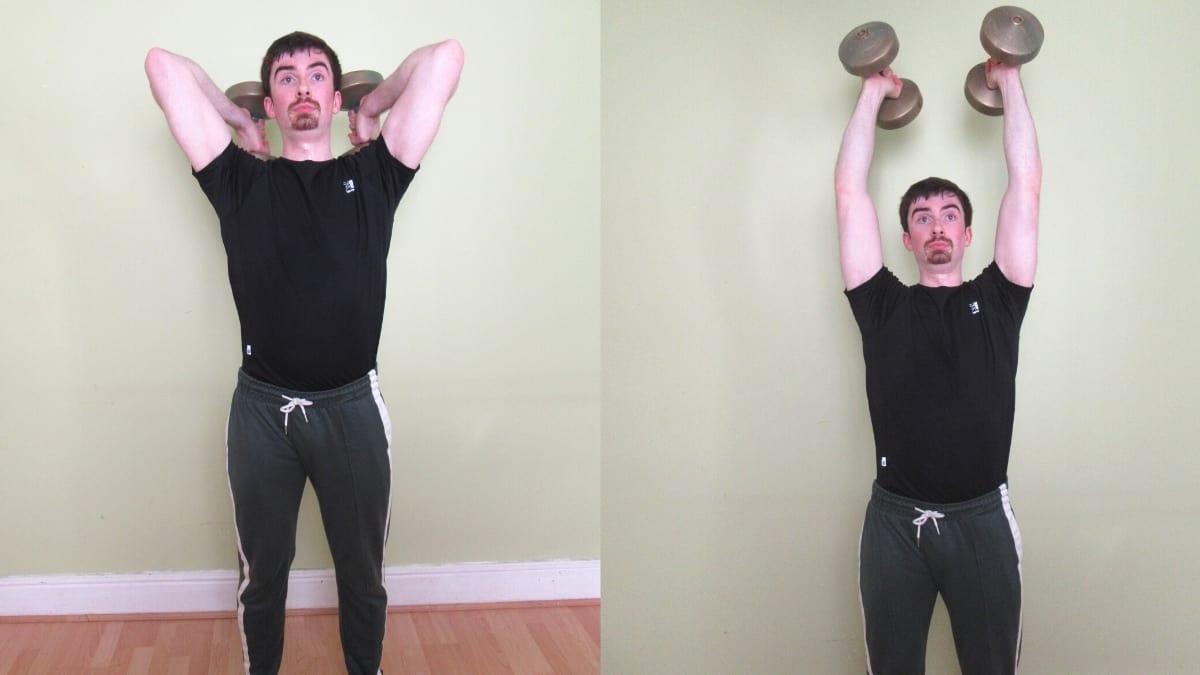 The dumbbell French press is a popular isolation exercise for the triceps and one which requires minimal equipment. As such, the DB French press is an excellent training drill for both gym-goers and home workout enthusiasts alike.

Unlike the traditional French press exercise, which is typically done with a bar, performing the French press dumbbell style enables you to train your triceps equally and build more proportional upper arms as a result.

This guide demonstrates how to do 4 different dumbbell French press variations with the proper form and then discusses the benefits of the exercise.

How to do a French press with dumbbells

Performing the seated French press with dumbbells encourages the development of symmetrical triceps because you have to lift each weight independently, which in turn ensures that your triceps are receiving similar amounts of work.

Additionally, because the seated dumbbell French press requires less core stabilization than the standing version, it’s easier to keep the focus of the exercise on your triceps.

The trade-off is that the seated variation doesn’t burn as many calories as the standing dumbbell French press because your legs and core muscles aren’t as active when you’re sat down. [1]

As such, if you’re training for fat loss as well as muscle growth—and if you want to give your abs a good isometric workout in the process—then it makes sense to stick with the standing DB French press.

If you only have access to one dumbbell, then you can also do the DB French press by cupping both of your hands around one end of the weight and then lowering it behind your head.

While the one-dumbbell version isn’t as effective for promoting triceps symmetry as the two-weight version, it does enable you to lift slightly heavier because it’s easier to balance one dumbbell than it is to stabilize two independent weights.

The only drawback of the exercise, which could be the limiting factor if you train at home, is that you’ll need access to a heavier dumbbell (around twice as heavy, to be precise) when you train both arms together.

Like the decline dumbbell French press, the lying DB French press places your shoulders into a lower degree of flexion than the standing and seated versions, which in turn puts less pressure on your rotator cuffs.

Since the largest head of the triceps acts on the shoulder as well as the elbow, you actually want to bring the bar behind your head during a lying dumbbell French press so that you can place the long head under an intense, growth-stimulating stretch.

Lowering the weight to your face, on the other hand, puts a lot of stress on your elbows and reduces the effectiveness of the exercise by failing to put the long head in its strongest force-producing position (which is to say, when it’s stretched).

You can also do a kneeling French press or a stability ball French press if you want to work your core while training your triceps.

Both the standing and seated dumbbell French press are capable of strengthening your triceps and boosting your pressing power when you perform them consistently. But those aren’t the only benefits of this tricep-taxing exercise.

What good are muscular triceps if they’re not at least somewhat symmetrical as well?

If you have tricep size asymmetries, then the bar is more likely to become lopsided during your compound presses and isolation exercises, which exacerbates your muscular imbalances even more.

Similarly, having a big size disparity between your triceps makes your upper body look less aesthetic, which could easily cost you a top-place finish if you’re a physique athlete.

But it doesn’t have to be this way. By doing the dumbbell French press, in which you have to lift each weight independently, you can ensure that both of your triceps are receiving similar amounts of work and are thus growing roughly in proportion.

You may, of course, have a better mind-muscle connection with your stronger triceps muscle, in which case that muscle will still receive more tension even when the sets and reps are equated (muscles, after all, don’t understand what ‘reps’ are, they just respond to tension).

However, training each arm independently with dumbbells is actually a fantastic way to equalize your mind-muscle connection and triceps development. So don’t ditch the dumbbells if you still feel one arm doing more work initially—noticeable improvements take time, patience, and, above all, consistency in the gym.

While there are many excellent bench-specific exercises that you can perform to boost your lockout strength, many lifters overlook the effectiveness of isolation exercises for increasing their lockout power.

A French press, after all, is basically just a heavy lockout performed purely with the triceps.

So if you can get strong at dumbbell french presses, then it follows that you’ll be able to improve your pressing power as well because the lockout phase of a bench press or overhead press is handled mainly by the triceps.

You can also do a deadstop French press on the floor to ensure that all of the concentric lifting is performed—momentum-free—by your triceps.

While the biceps are certainly the most visible muscle in your upper arms, it’s the triceps that actually account for most of your upper arm size, around two-thirds, to be specific.

But within the triceps, it’s the long (inner) head that makes up most of the mass, again, around two-thirds.

Therefore, if you want to beef up your arms, it’s essential to train the long head optimally and with enough volume.

Since only the long head acts on the shoulder joint, you can maximally stimulate this all-important tricep head by extending your elbows while your arms are in an overhead position, i.e., by doing a French press.

Make sure to lower the dumbbells deep enough to where you feel an intense stretch in the backs of your arms. This pulling sensation is a strong indication that you’re placing the long head under plenty of growth-stimulating tension, and it should be followed by a forceful triceps flex to move your elbows into full extension.

That’s right; full elbow extension. Contrary to popular wisdom, you do want to lock your elbows out during the dumbbell French press because elbow extension is the primary triceps function.

The dumbbell French press is best performed for moderate to high reps because it’s a single joint exercise and, therefore, quite elbow-intensive. So aim for around 3-5 sets of 10-15 reps per session.

Do between 1-3 weekly sessions depending on your level of advancement, by which I mean triceps development relative to your genetic potential—not how many years you’ve been going to the gym.

It’s best not to do the DB French press more than 3 times per week because your elbows and surrounding connective tissue structures aren’t as malleable and don’t recover as quickly as your triceps muscles. [2]

Conclusion: Is the dumbbell French press worth performing?

The DB French press is definitely worth performing if you want to grow your triceps because it hits all three heads while emphasizing the biggest of those heads, which, as we established, is the long head.

Unlike lifting a barbell for this exercise, which entails using an extreme pronated grip, doing a French press with dumbbells places your wrists in a neutral position and thus helps to alleviate a lot of stress from your joints. [3]

To maximize your triceps hypertrophy, go with the seated dumbbell French press because it requires less core stability than the standing version, which in turn helps you to establish a slightly stronger-mind muscle connection with your triceps.

If, on the other hand, you want to increase your calorie burn and work your abs more, then do the standing dumbbell French press instead.