Pump up your biceps with this unique hammer curl variation. 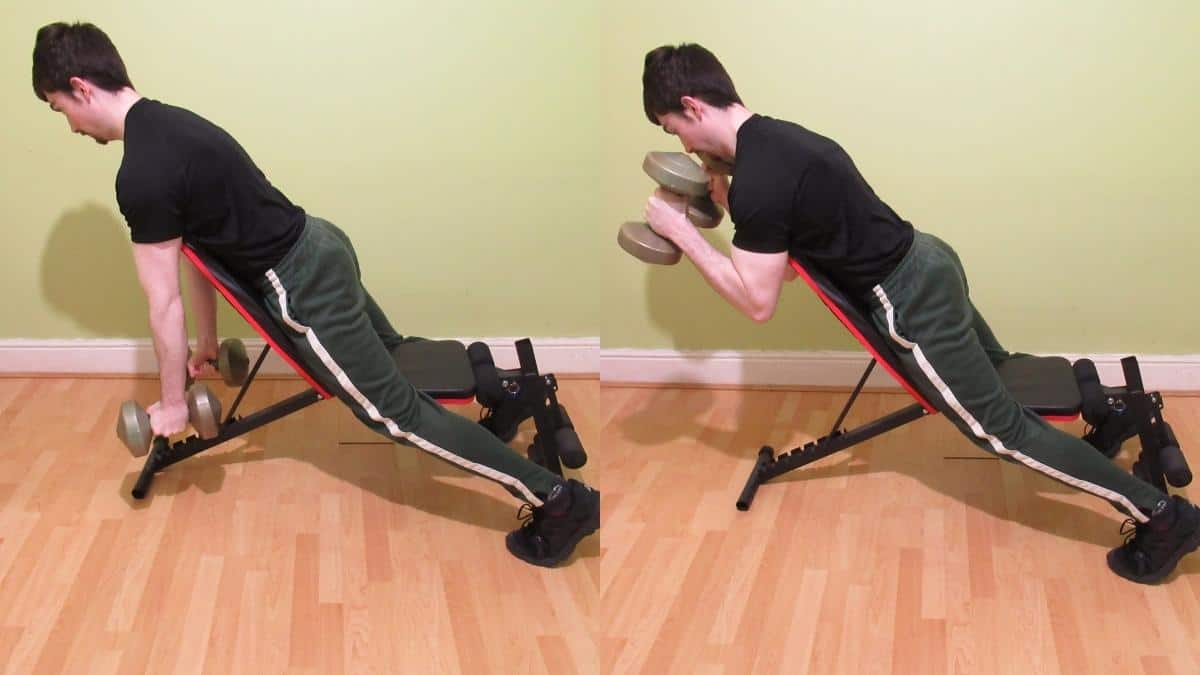 The decline hammer curl is a great exercise for building up the biceps brachii muscle because bracing your chest against the bench helps to prevent you from swinging the weights up, which in turn helps you to keep tension on the target muscles.

While the movement is certainly harder to set up than the dumbbell hammer curl, the intensified peak contraction that it produces may be worth the extra time commitment if you're a serious bodybuilder.

How to do a decline dumbbell hammer curl

While decline dumbbell hammer curls take more time to set up than regular decline curls, the extra effort isn't for nothing because the exercise does come with some rather unique benefits.

Sitting hammer curls are most challenging when your elbows are at a 90-degree angle. Decline hammer curls, on the other hand, are the hardest when the bicep is in its most contracted position, which is to say at the end of the concentric (lifting phase) part of the rep.

So, since the exercise is hardest when the bicep is most contracted, it naturally produces an intense muscle pump, more so than a barbell hammer curl, which, like the regular version, is hardest at 90-degrees.

The reason that training at short muscle lengths (i.e., when the muscle is maximally contracted) provides a better pump is that it's muscle contractions that actually infuse a muscle with lactic acid, [1] which is what bodybuilders commonly call the pump.

So if you want to maximize your muscle pump, then the decline hammer curl is an excellent choice for doing just that. It makes a great finishing exercise for flushing your arms with blood at the end of a hard and heavy training session.

Adherence to the correct lifting technique is the only true protection against poor form and its negative effects—reduced muscle stimulation and increased injury risk.

Nonetheless, having your torso braced against the backrest and your hips sat on the seat still helps to prevent you from swinging the weight up. As a result, if you often get tempted to cheat during the regular hammer curl, then performing the decline version will naturally help you to keep tension on the target muscles.

That said, it's still possible to use your shoulders to swing the dumbbells up during a decline hammer curl. A little bit of shoulder movement is fine because the biceps are shoulder flexors after all, [2] but just be sure to keep the flexion within reason so that your biceps are doing the majority of the lifting.

The decline DB hammer curl certainly helps to improve the muscle size and strength of your arms. However, there are two main drawbacks that make this movement impractical and even slightly painful for some people.

When you do a hammer curl with a plate, you just grab the weight disc and start lifting—you don't even need dumbbells.

But with a decline hammer curl, you need access to dumbbells and an adjustable bench. This setup might not be feasible if you train at home or if you work out in an especially busy gym.

Also, getting the weights into position can be challenging as you get stronger. Specifically, it's hard to brace your torso against the bench while holding heavy dumbbells. The solution, of course, is to get in position and then ask someone to pass the dumbbells to you. But then this makes the exercise more of a hassle than its worth considering there are many fine alternatives that provide similar benefits.

Pressing your chest into a bench—despite the backrest's padding—can hurt your sternum due to the sheer amount of force going through that area.

And the more weight you lift, the higher the chance becomes that you'll experience this side-effect, or the worse it will become if you already have this problem.

Just think about it. The dumbbells are essentially trying to pull your chest through the bench, which is impossible. So since the backrest is preventing you from being pulled to the ground by the weights, your sternum is bearing the brunt of the force, which is why that general area might feel pained when you perform chest-supported exercises like the decline hammer curl.

Should you do the decline hammer curl for your biceps?

From a strength and hypertrophy perspective, the decline hammer curl is an excellent exercise because the nature of the movement makes it very easy to keep tension on the target muscles, namely, the brachialis, brachioradialis, and biceps.

However, just because an exercise is conducive to maintaining good form doesn't actually mean that it's superior. After all, if you've already mastered the proper lifting technique for hammer curls, then any variation (even the hammer curl to overhead press) can be effective. The extra stability that the bench provides simply makes the decline version more beginner-friendly—if you can get your head around the setup, that is.

The problem with the decline hammer curl is that it can be tricky to get the dumbbells into position. You either need to stick with light weights or get someone to pass you the heavier dumbbells. So, for this reason, I recommend using the drill as a finishing movement (where you'll naturally be lifting lighter weights) or taking a pass on it altogether.