Find out how to hammer curl for maximum bicep, brachioradialis, and brachialis development. 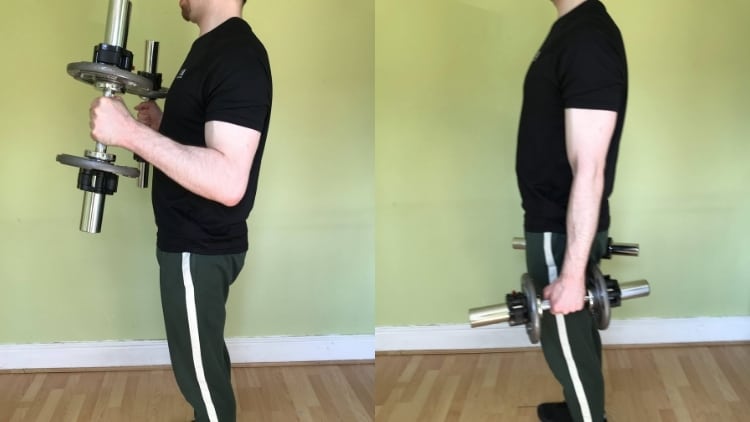 Dumbbell hammer curls, when performed correctly, increase the size and strength of the bicep brachii, which is a two-headed muscle that flexes the elbow and supinates the forearm. The DB hammer curl, like traditional bicep curls, also works your brachialis and brachioradialis, which, like the biceps, are potent elbows flexors in their own right.

So if you want to perform the absolute best bicep workout for mass, then make sure to include the hammer grip curl in your routine because it enables you to lift heavier than any of the other bicep curl variations.

This article explains the proper hammer curl form and discusses the most common mistakes that lifters make when performing this popular arm exercise.

How to do hammer curls correctly

Hammer curls work the bicep brachii muscle as well as the brachialis and brachioradialis muscles. The bicep consists of a long head and a short head and is located on the front of your arm, while the brachialis is a deeper muscle that lies beneath the biceps and which, when well-developed, can push your biceps out and make them look more peaked. [1]

Similarly, the brachioradialis is a forearm muscle that functions to flex the elbow, particularly when the biceps are in a neutral (like in DB hammer curls) or pronated position.

Learning how to do a hammer curl with the proper form can protect you against these common technique mistakes. However, when you're in the middle of an intense gym workout, it can often be tempting to sacrifice the quality of your form in order to lift more weight. So if you want to maximize your arm development, then definitely make sure that you're not guilty of any of these dumbbell hammer curl pitfalls.

Swinging the dumbbells up

You wouldn't believe it the way that some lifters perform it, but hammer biceps curls (as the name heavily suggests) are, in fact, an isolation exercise.

So while you may be able to lift more weight by swinging the dumbbells up with whatever muscles will contract in the moment, you won't actually be putting any more tension on the target muscles because the extra resistance will simply be distributed across all the muscles that you're using to cheat the weight up.

Not only that, but lifting more weight than your arms can handle will put extra strain on your joints and connective tissue, which could lead to an injury if you keep the bad habit up.

Shortcutting the range of motion

This mistake often goes hand in hand with the ego-lifting pitfall explained above because, in order to lift more weight, you generally have to reduce the range of motion (ROM) on your dumbbell bicep exercises.

But really, when you reduce the ROM, all you're really reducing is your arm development. This is because when you perform half-rep hammer curls, you're recruiting fewer muscle fibers (and thus stimulating less muscle growth) than when you perform full repetitions. [2]

So to get those bicep, brachialis, and brachioradialis gains, make sure to get a full stretch and contraction on single every rep. You can achieve a full stretch by consciously flexing your triceps at the bottom of each rep because, when the triceps are contracted, the biceps, by definition, have to be stretched.

As mentioned in our back and biceps workout for mass, to get a proper contraction, squeeze your biceps and the top of your forearms as you curl the weights toward your shoulders.

Using the wrong grip for your goals

When performing hammer bicep curls, holding the dumbbell in the center requires significant force output from your forearms. Now, that's all fine and dandy, but as your upper arms become stronger, your forearms will likely no longer be able to keep up with your biceps and brachialis, which, as mentioned, are two very powerful elbows flexors.

The solution is to let the top of the dumbbell rest against your thumb. This way, you don't have to push your forearms to the limit just to hold onto the dumbbells, which in turn means that you can devote more attention to working your biceps, which, after all, is the purpose of the exercise.

Yet, if you're the type of lifter who just loves training their grip, then you can challenge yourself by always trying to grasp the dumbbell in the center of its handle. Just know that you might have to decrease the weight and/or your reps per set until your grip strength catches up to your elbow flexion strength.

The standing dumbbell hammer curl is one of the most popular arm exercises of all time; hence why they always feature in our bicep workouts for women and men.

Yet, few lifters understand why they're performing it besides the fact that it gives them a good pump. But by understanding the true benefits of this muscle-building movement, you can place it strategically in your workout routine to get the most bicep bang for your buck.

Many gym-goers have impressive biceps when flexed. However, when their arms are just hanging by their sides (i.e., most of the time), their biceps often look stringy and thin. Why?

Because most people neglect their brachialis by only doing regular bicep curls.

Like the biceps brachii, the brachialis is a powerful elbow flexor. But to give it the attention that it needs to grow bigger and stronger, you must place your biceps at a mechanical disadvantage while you curl so that they don't dominate the movement and take tension off your brachialis.

The easiest way to do this is by curling with a neutral or reverse grip (see our reverse curls vs hammer curls article for more info). This way, your brachialis has to do the lion's share of the lifting and, as such, receives the majority of the tension as well.

The DB hammer curl exercise works the brachioradialis, which is a large muscle that's located on the thumb side of the top of the forearm. It's a powerful elbow flexor that, like the brachialis, becomes even more active when you place your biceps in a weaker position.

Due to the sheer size of the brachioradialis, beefing it up by performing bicep hammer curls will make your lower arms look thicker and more muscular from all angles.

Not only that, but a well-developed brachioradialis will also make you stronger at compound movements like pull-ups and barbell rows because pulling exercises such as these require a great deal of biceps and brachioradialis strength to execute properly.

Since the standing hammer curl enables you to lift heavier weights than a regular bicep curl, the former is naturally a superior exercise for building overall arm (not just bicep) strength.

This extra arm strength will certainly make you stronger at compound pulling movement as well. But it'll also enable you to perform every tasks more easily now that you have strong arms that can lift heavy objects.

While performing a superset for your biceps certainly has its place in a hypertrophy-oriented routine (especially towards the end of a workout), avoid doing back-to-back sets when you're in the pursuit of maximum strength on the hammer dumbbell curl. You ideally want to rest 2-3 minutes between each set so that your reps don't drop off too much.

There are a variety of different hammer curl exercises that you can do to build muscle during your gym session or at home bicep workout. So no matter what equipment you have available, you'll definitely be able to find a variation that you can perform in order to reach your arm development goals.

What are hammer curls?

Dumbbell hammer curls, sometimes called hammerhead curls, are an arm isolation exercise that works the biceps brachii, brachialis, and brachioradialis muscles. While they're typically performed with dumbbells for convenience, you can also do hammer curls with other equipment like barbells and cables.

What do hammer curls work?

Performing hammer curls with dumbbells mainly works your biceps, brachialis, and brachioradialis muscles. The movement also works your core to an extent because you have to flex your abs isometrically in order to lift heavy dumbbells.

What's the best way to do hammer curls?

This depends on your goals. For maximum strength, you should do the alternating hammer curl because this way, one arm can rest while the other is working, which will enable you to perform more reps.

For the greatest workout efficiency, perform them standing with both arms simultaneously.

Do hammer curls work your forearms?

Yes, standing hammer curls work the brachioradialis, which is a muscle of the forearms. They also work your forearm flexors and extensors to an extent because these muscles are required to maintain a firm grip on the dumbbell.

Do hammer curls work your triceps?

No, hammer curls don't work your triceps in the conventional sense of the term. Your triceps are undoubtedly active during the movement because they naturally contract as your biceps relax, but they don't get put under any direct tension during this exercise.

Yes, hammer dumbbell curls are excellent for building mass because they allow you to lift more weight than any other curl variation. Moreover, unlike compound movements, they completely isolate your arms so that you can stimulate maximum muscle growth. [3] Stick to sets of 6-12 reps to focus on the fast-twitch muscle fibers, which are fibers that grow the largest and the strongest.

The verdict: Should you do hammer curls for your biceps?

The standing dumbbell hammer curl is a brilliant bicep building exercise because it's simple to perform, has a proven track record for building impressive arms, and allows you to lift more weight than traditional curls.

Similarly, DB hammer curls are incredibly efficient and are one of the most simple bicep exercises that you can perform. Not only do they blast your biceps, but they also beef up your brachialis and brachioradialis, both of which are critical muscles for developing overall arm size, strength, and aesthetics.

Since the biceps and other elbows flexors tend to be fast-twitch, stick to sets of 6-12 reps on your dumbbell hammer curls for the majority of your sets. You can certainly use higher reps to recruit the remaining slow-twitch muscle fibers, but for maximum muscle growth, make sure to lift heavy to take advantage of this exercise's high loading potential.