How to do a decline dumbbell curl for your biceps

Includes 4 pros and cons of decline curls that every lifter should consider. 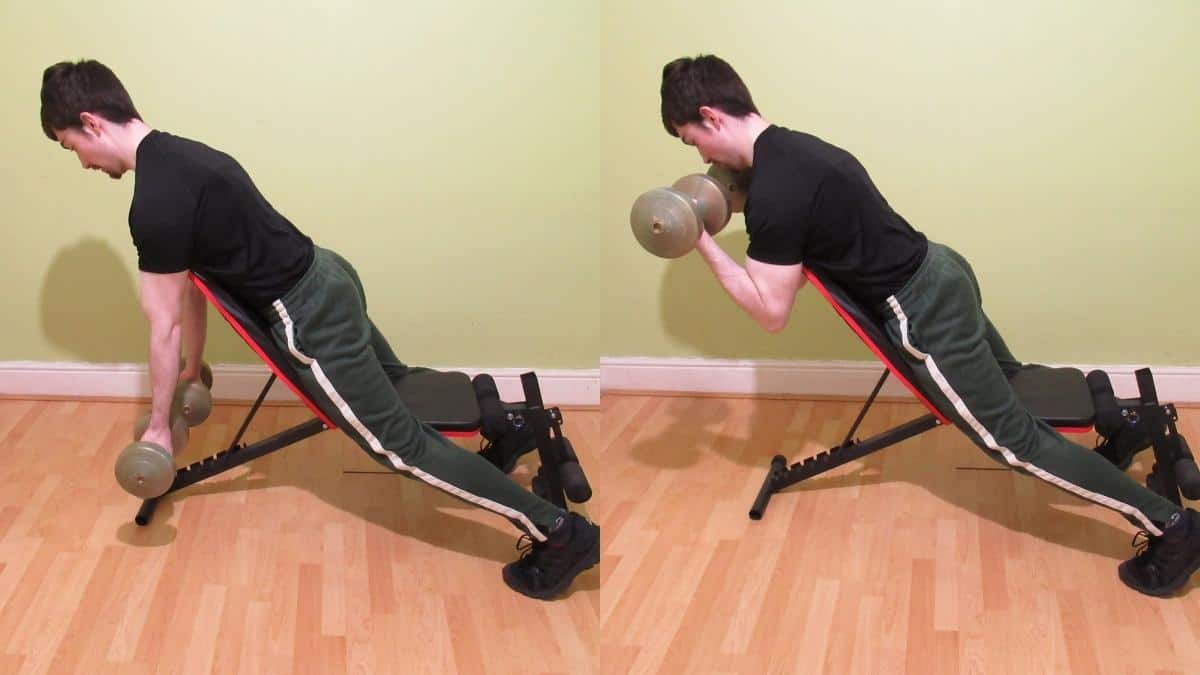 The decline dumbbell curl is a deceptively effective exercise for building the biceps brachii. Although you have to lift lighter on this movement than on traditional weight lifting curls, decline curls really pump up your biceps and, because you're lifting dumbbells, drastically reduce your chance of developing muscular imbalances.

How to do decline curls

Decline bicep curls, as the name suggests, work your arms from a unique angle. This positioning definitely has its pros, but there are also some cons that you need to watch out for as well.

Just about every weight lifter loves the feeling of blood rushing through their biceps, a sensation that's otherwise known as the pump. [1]

But getting a great pump doesn't just involve doing endless sets of buddy curls. You need to be smart about your exercise selection if you want to maximize your pump.

Specifically, you want to do exercises like decline curls, which train the biceps in a highly contracted, shortened muscle position. After all, it's repeated muscle contractions that actually create the pump in the first place. So any exercise that's hardest in the contracted phase of the rep—the decline dumbbell curl is a prime example of this—is going to produce a powerful muscle pump.

Make sure to squeeze your biceps as hard as you can on every rep. Since there's not much tension in the bottom part of the lifting motion when your elbows are close to full extension, it's imperative that you take advantage of this movement's most challenging phase, which is to say, when your biceps are nearing their maximally contracted state.

While exercises like the undeniably functional inverted rack curl can certainly build muscle, bilateral movements like this aren't necessarily the best at building symmetrical biceps because your stronger arm can often dominate the exercise.

The decline curl, on the other hand, by the mere fact that it makes use of dumbbells means that it's the perfect movement for making your biceps look more proportional. Since you have to lift each weight independently, your more muscular arm can't help your weaker arm, which in turn means that both of your biceps will receive roughly equal stimulation.

This is especially beneficial if you're a bodybuilder or if you train for aesthetics because symmetry is almost as important as size for sculpting a well-balanced physique.

So if you currently have bicep muscular imbalances or want to prevent them from occurring in the future, then it's a good idea to switch out bilateral exercises for movements like decline dumbbell curls so that you can encourage your muscles to grow in proportion.

So far so good. Decline curls tick all the bicep building boxes. What's not to like?

To perform the decline dumbbell curl correctly, you have to press your chest against the backrest of the bench. This is widely known to cause sternum discomfort for many lifters because you're putting a significant amount of pressure on your chest area by bracing it against the bench. [2]

So if you feel any discomfort whatsoever, then it's recommended to switch the exercise out for something else. After all, the problem is only going to get worse as you gain strength because the dumbbells are effectively trying to pull you through the bench, and so your chest has to bear the brunt of the load.

Since more and more former gym-goers are ditching their memberships to train at home these days, performing exercises that require extra equipment isn't always feasible.

Sure, adjustable benches aren't the most complex or expensive piece of equipment, but some weight lifting enthusiasts simply don't have the space for bulky gym equipment.

Plus, even if you go to a gym, it's not always possible to get a bench at peak times. And even then, you have to hope and pray that someone doesn't take it while you go and fetch your weights.

Therefore, sticking to exercises that require a pair of weights and nothing more, such as the decline bicep curl, might be a better option if you're short on equipment or train in a busy gym.

The decline dumbbell curl really pumps up your biceps, that's for sure. Yet, this underrated exercise also helps to develop proportional biceps because by using dumbbells, you can ensure that both of your arms are getting equal work, which in turn helps your upper body to look more balanced.

If you don't have a bench to do a decline dumbbell curl the traditional way, then you can actually mimic the movement by bending over at the waist slightly, letting your arms hang forward, and then curling the weights as you normally would. This variation is also useful if the regular version puts too much pressure on your sternum.