Got elbow pain from skullcrushers? These 7 fixes could help

Try these 7 skull crusher solutions to reduce or eliminate your elbow pain. 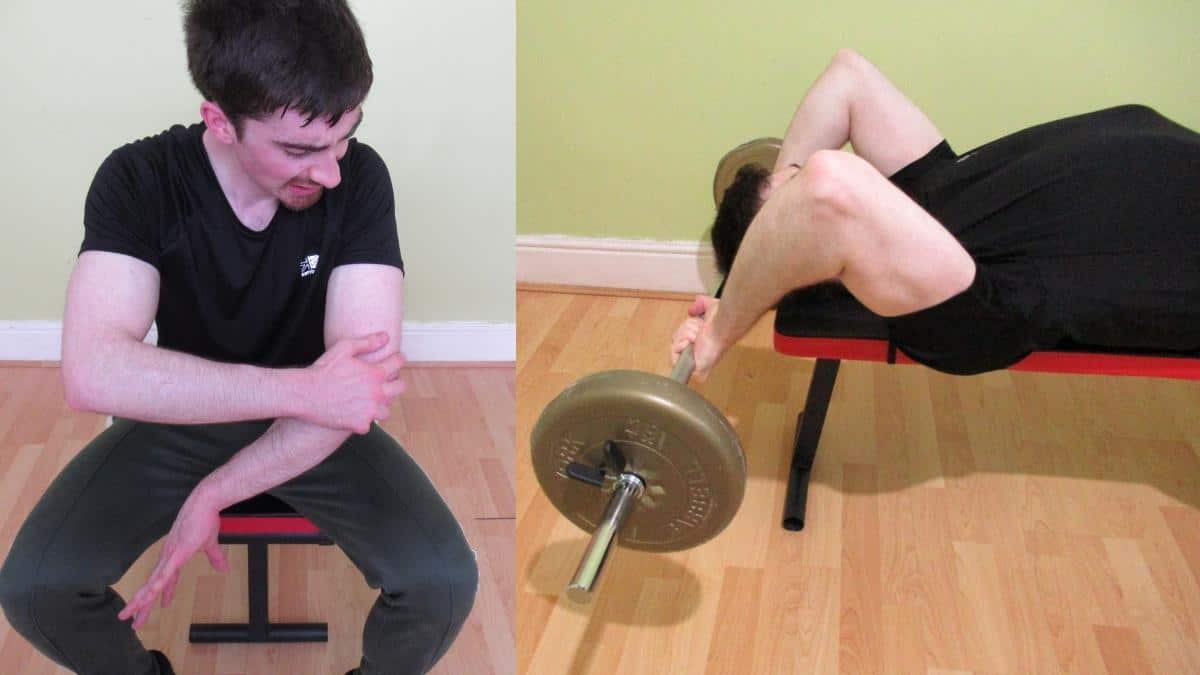 Lifting with the proper skull crusher form can help to reduce or eliminate elbow pain, clicking, and popping during this notorious exercise.

As you'll soon learn, however, there are more reasons than simply using the improper technique for getting elbow pain on skullcrushers.

For some people, skull crushers are simply are a no-go exercise for building their tricep muscles.

Other lifters can often fix their skull crusher elbow pain by making a few intelligent training modifications to take the stress of their joints.

Table of Contents show
Are skull crushers bad for your elbows?
How to reduce your skull crusher elbow pain
1. Stick to high reps
2. Lower the weight behind your head
3. Allow liberal amounts of shoulder movement
4. Use dumbbells or cables
5. Avoid high training frequencies
6. Improve your technique
7. Take a break from training
What if I still get elbow pain from skull crushers?
Conclusion

Are skull crushers bad for your elbows?

Skull crushers are infamous for causing elbow pain. But considering that many people perform them incorrectly, it's not surprising that skull crushers are a troublesome exercise for some lifters.

Free weight skull crushers require considerable stabilization. While this means that your joints aren't forced into fixed positions like they are with machines, this inherent instability leads many lifters to use the incorrect technique, especially when they lift excessively heavy weights.

If you're experiencing elbow pain from skullcrushers, then the first solution is to ensure that you're using the proper technique. Lifting correctly will take tension off your elbows and give your triceps a better workout in the process.

But as you're about to learn, there's more to fixing your skull crusher-induced elbow pain than merely optimizing your lifting technique.

How to reduce your skull crusher elbow pain

A handful of lifters will be able to completely eliminate their elbow pain by making some or all of these modifications.

On the other hand, some people simply can't perform skull crushers pain-free no matter what they do. A few even get elbow pain from tricep weight lifting of all kinds—not just skull crushers.

Also, the current state of your elbow health and the amount of weight that you're lifting both affect the likelihood of these techniques working.

Even though the triceps have a higher proportion of fast-twitch muscle fibers than any other body part, it's not smart to train them with low reps during isolation exercises.

By all means, load up on your heavy presses.

But stick to sets of 10-20 reps for skull crushers so that you don't put too much torque through your elbows.

Performing higher repetitions—especially on isolation exercises where the range of motion is small—is an excellent strategy for accumulating plenty of training volume in a short space of time.

After all, your muscles certainly can't tell how many reps you're doing because they're just pieces of meat that respond to tension—your triceps don't have an in-built rep counter!

High-rep training is also easier to recover from than low rep lifting because it's less taxing on your joints, connective tissue structures, and central nervous system. So you'll be able to take advantage of higher training frequencies to grow your triceps if you stick to higher repetitions.

Of course, training your triceps too frequently could also be a problem in itself because joints and ligaments take longer to recover than muscles. The good news is that fast-twitch muscles like the triceps need less volume than slow-twitch, endurance-orientated muscles to grow at the optimal rate.

2. Lower the weight behind your head

You don't need to lower the weight to your face just because the exercise is called skull crushers.

Not only does bringing the bar down to your forehead put your face at risk of a severe injury, it also puts far more pressure on your elbows.

On the contrary, lowering the bar behind your head involves your shoulder joints and takes tension off your elbows as a result.

Better yet, from a hypertrophy perspective, lowering the weight behind the bench puts the biggest head of the triceps—the long head—under a far greater stretch, something that's critical for maximizing muscle growth.

Unlike the lateral and medial heads of the triceps, which are pure elbow extensors, the long head of your triceps performs shoulder extension as well as elbow extension.

So by allowing liberal amounts of back and forth shoulder movement during skull crushers, you're giving the all-important long head a better workout while simultaneously taking tension off your elbows.

If there's one tip that will fix your elbow pain, it's this one because you're distributing the load over two joints (shoulders and elbows) rather than just one.

There is, of course, a sweet spot for this shoulder movement.

While it's okay to move your shoulders well behind the bench to stretch the long head of your triceps—extending the shoulders is the long head’s job, after all—you still want to allow plenty of elbow movement as well.

In other words, don't turn the skull crusher into a pullover.

4. Use dumbbells or cables

Learning how to do skull crushers with dumbbells can lessen your elbow pain in a few ways.

First off, you'll be lifting lighter when you train with dumbbells because they require more stabilization than barbells. Therefore, there will be less torque going through your elbows.

Second, both arms can move independently when you use dumbbells for skull crushers. So if your elbow pain is concentrated in one side, then you can really focus on bringing that side's shoulder into the movement to distribute the tension across a wider area.

Using dumbbells also helps you to keep your elbows straight and prevent them from flaring out because you're holding the weights with a neutral grip (or at least, you should be). This grip also helps to keep your wrists out of trouble because they don't get forced into excessive pronation like they do when you're using a barbell.

Similarly, performing a skull crusher with cables is helpful if free-weight skullcrushers hurt your elbows because cables require less stabilization than free weights.

Cables typically provide very smooth resistance without much friction, so there's unlikely to be any jarring sticking points during your reps that could hurt your joints.

Muscles have much faster recovery times than other tissues like ligaments, tendons, and cartilage.

As such, it's entirely possible that your triceps will be raring to go when your other connective tissue structures still require more recovery.

For this reason, avoid training your triceps more than twice per week unless you're a genuinely advanced lifter who's closing in on their genetic potential.

If your elbows hurt during skull crushers, then—after taking a break from lifting—just train your triceps once per week and monitor your elbow health.

There's a good chance that a lower training frequency will alleviate or even eliminate your elbow pain because you'll be giving your other tissues much more time to recover.

Get someone to take a video of you performing skull crushers, then analyze your form (ideally with a coach). Is your technique as sound as you thought it was?

Be honest with yourself. It can be hard to admit that your form needs work if you've already been lifting for years. But it's better to nip the problem in the bud by performing a weight reset now rather than a year down the road.

So if you're not using a full range of motion, if you're not controlling the descent, or if you're lowering the bar to your face rather than behind your head, then reduce the resistance and improve your technique.

There's nothing wrong with using an empty bar or a ridiculously light weight if that's what it takes to master the skull crusher technique. Progressive overload is important because it's a reliable way to gauge your progress. But on the most basic level, your triceps just respond to tension—they can’t read the numbers on the weights.

7. Take a break from training

While some gym addicts might cringe at the idea of taking time off training, it could be exactly what your elbows need.

Remember this: Joints, ligaments, tendons, and similar tissue structures all take much longer to recover than your muscles.

In order to see if the above modifications are actually reducing your skull crusher elbow pain, you need to let the current pain dissipate, which usually involves taking time away from the gym.

Avoid doing any heavy lifting for 2-3 weeks if you're serious about your long-term elbow health.

Your muscles will not evaporate if you take a few weeks away from the gym.

Once you're back in the gym, considering doing fewer sets of skull crushers or performing them later in your workout with lighter weight. Sometimes your ambitious training volume target can be the issue rather than a specific exercise.

What if I still get elbow pain from skull crushers?

First and foremost, talk to your doctor so that they can diagnose your problem. You don't want to keep lifting through the pain because it could turn into something more serious—then you won't be doing any lifting.

If your elbows still hurt after taking ample rest, and even when using dumbbells for skull crushers, then it's time to look for a good skullcrusher alternative.

As effective as skull crushers are for building the triceps, they're by no means compulsory for maximizing your triceps hypertrophy; there are other elbow-friendly exercises that produce comparable results.

It's important to understand whether skull crushers caused your elbow pain or if they just exacerbated a problem that was already there.

For example, perhaps you were simply doing too much training volume, and the skull crushers just made the negative effects of the excessive volume more apparent?

Of course, it's entirely possible that skullcrushers are, in fact, the source of your elbow pain. In which case, after talking with your doctor, you should improve your lifting technique by implementing the above modifications. And if that doesn’t work, then just pick a more elbow-friendly movement instead.

The triceps are big, strong fast-twitch muscles; what a shame it is that they function to extend a small and often fragile joint!

Your bone structure and joint health play a sizable role in your ability to tolerate elbow-intensive exercises like skullcrushers. Some people just aren't equipped to perform the exercise pain-free, whereas others don't seem to get hurt at all despite using sloppy form.

The good news is that much of the time, you're in control of your destiny, at least as it relates to elbow pain and skull crushers.

Lower the weight behind your head rather than to your face so that your elbows don't have to handle every ounce of weight by themselves. Involving your shoulders gives the long head of your triceps more stimulation anyway and actually enables you to use more resistance.

Finally, if your elbows hurt, click, or if you feel a popping sensation in your joints, then don't be afraid to take time away from the gym and/or pick a different exercise. Muscle mass is pretty easy to maintain (especially for a few weeks or months), and your elbows will be thankful for the rest.