We tried every version of cable skull crushers: Here are the top 6 variations for your triceps. 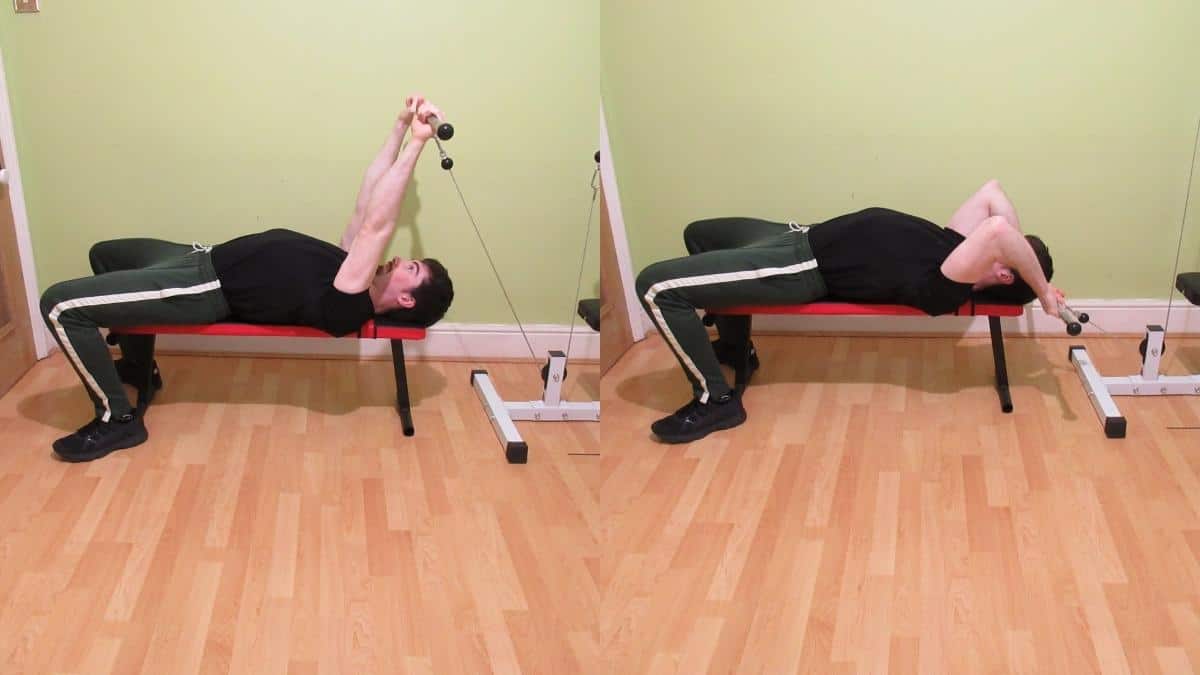 Lying cable skull crushers give you a great arm pump by taxing your triceps with constant tension.

This guide covers six variations of cable skullcrushers in total. So regardless of what attachments you have available, you'll be able to get a great muscle-building workout from cable machine skull crushers.

How to do lying cable skull crushers

Although performing skull crushers with cables (rather than with free weights) means a longer and more complicated setup, the extra effort will be worth the resulting triceps pump and the enhanced exercise variety—especially if you're a bodybuilder.

As effective as the dumbbell skull crusher is for building triceps size, free-weight skull crushers don't provide much tension at the top of the rep. This reduces your pump because taking tension off the working muscle gives the lactic acid a chance to escape.

On the contrary, cable skull crushers challenge your triceps with constant tension and consistent resistance.

The constant tension increases your pump by making your triceps contract against resistance throughout the entire duration of the set (you can’t just rest at the top of each rep like you can with the free weight version).

Similarly, having consistent resistance makes your reps feel more fluid and puts less pressure on your joints, which is particularly helpful if the free weight version hurts your elbows. (Resistance band skull crushers, on the other hand, provide constant tension, yet they also provide very inconsistent resistance because bands get heavier the more you stretch them).

Likewise, since cable machines are compatible with a wide variety of attachments, you can spare your wrists from excessive stress by trying multiple attachments and then sticking with the one that you find the most comfortable to use.

Everyone knows that barbell skull crushers are a phenomenal mass-builder. However, free weight skull crushers also demand greater exertion from your stabilizer muscles, which can sometimes make it harder to focus on training your triceps.

The cable skullcrusher, which is one of the best cable tricep exercises, lets you dedicate 100% of your attention to training your triceps and making them grow because the machine helps you to stabilize the weight to an extent.

Not only does this stabilization assistance enable you to overload your triceps with more resistance, but it also prevents the cable attachment from becoming lopsided, which in turn helps to limit tricep size asymmetries.

So if your stabilizer muscles are fried after all those heavy presses, then lying cable skull crushers are the solution to your fatigue because they let you focus purely on training your triceps to create the strongest possible hypertrophy stimulus.

While exercises like the kettlebell skull crusher and plate skull crushers can certainly have their place in a well-programmed workout routine, they're not very conducive to progressive overload because, past a certain point, the weight increments are too large for most lifters to gain strength on a consistent basis.

Conversely, cable stacks tend to ascend in very manageable increments. The best machines even come with small micro plates that you can slide onto the stack to make the already small weight jumps even more attainable.

Ultimately, these incremental weight increases help you to gain strength, which in turn enables you to stimulate more muscle hypertrophy by overloading your triceps with greater amounts of resistance.

Increasing the cable skull crusher resistance on a regular basis, if only by a small amount, helps to keep you motivated because you can track your strength progress over the weeks and clearly see your triceps getting stronger.

Cable rope skull crushers create a strong triceps contraction and help to ensure that both of your arms are receiving similar amounts of stimulation.

Even though your arms aren't moving completely independently, each arm still has to lift its own side of the rope, so you'll easily be able to tell if your stronger tricep is dominating the movement.

Rope skull crushers are an excellent exercise if you want to sculpt symmetrical triceps while achieving a powerful upper arm pump in the process.

You can further increase your pump and intensify the peak contraction by spreading the rope at the end of each rep. This simple act ensures that you're training your triceps with a full range of motion by completely extending your elbows, which, after all, is the primary triceps function.

If you want to overload your triceps with heavy cable resistance while keeping your wrists in a comfortable position, then the v bar skull crusher is a great option.

You can lift more weight on v bar skull crushers than rope skull crushers because holding a v bar requires less stabilization than holding a tricep rope since ropes are essentially isolateral in the sense that each arm has to lift its own side of the rope.

Since v bar skull crushers place your hands in a neutral position, they're also a very joint-friendly exercise that you can really load up on without the fear of straining your wrists.

As with the barbell version, you can also perform cable skull crushers on the floor if you don't have access to a weight bench. Just note, however, that doing them on the floor with free weights will likely reduce your range of motion. This is because you won't be able to move your shoulders as far back as usual (to stretch the long head) since the bar will hit the ground sooner when you're lying on the floor.

Cable skull crushers with a bar

Performing skull crushers with cables using the straight bar attachment enables you to tax your triceps with plenty of muscle-building resistance.

You can also use both close and wide hand positions to see which you find the most comfortable.

The downside is that, regardless of which grip you use, straight bars can still put a lot of stress on your wrists because they force you to use a rather unnatural, fully pronated grip.

So, by all means, use a bar for cable skull crushers, but just make sure that it's a curved bar.

If you struggle to keep your elbow tucked in during cable skull crushers, then you can do a supinated skull crusher on the cable machine to encourage proper form.

The single arm cable skull crusher is an exercise that you won't see performed too often.

It's a unilateral movement that has you train each of your triceps separately. As such, one arm cable skull crushers are the best cable skullcrusher variation for making your triceps more symmetrical because your dominant arm can't help your weaker arm.

You can perform the movement with a single handle, or—and this is the version that's most recommended—you can just grab the end of the cable and do your skullcrushers that way.

The latter option will put less pressure on your wrists because gripping a rubber ball is more natural than forcing your wrists into full pronation.

The only disadvantage of doing single arm skull crushers with cables is that your sets will take twice as long. So if time is of the essence, then you may want to stick to one of the bilateral exercises instead.

The isolateral version enables you to train each arm independently—thus minimizing tricep muscular imbalances—while also saving you time by letting you work both arms together.

From there, you simply bring the cables toward the bench so that they're directly over your forehead.

Finally, you need to flare your elbows out to the sides, and then you just extend your elbows back and forth like you usually would in a skullcrusher.

If you don't want to wheel a bench up to a pulley, then you can do cable skull crushers on the seated row station instead.

The movement is exactly the same as regular cable skull crushers, the only difference being that you'll be a bit closer to the ground with the cable row version.

Just note that some row station weight stacks increase in larger increments than dual pulley station stacks. So if you want to increases the resistance as often as possible to maximize your strength development, then try and find the cable station in your gym that offers the most manageable weight increments.

How many reps and sets of cable skull crushers should you do?

Normally, you shouldn't do skull crushers more than twice a week since they place a lot of torque through your elbow joints.

However, given how joint-friendly cable skull crushers are, you can perform them up to three times per week if you're suitably advanced.

For most lifters, however, 1-2 weekly sessions of 3-4 sets is enough volume considering that heavy presses already tax the triceps significantly.

As for reps, your best bet is to stick to moderate and high repetitions so that you can minimize the chance of hurting your elbows. Anywhere from 10-20 reps per set is the sweet spot.

If the cable skull crusher is your primary triceps movement, perform lower reps. If you're doing it to pump up your arms at the end of a workout, then perform higher reps.

The verdict: Are cable skull crushers worth doing?

While you may well be able to get a better triceps stretch with the free weight version since it allows for more shoulder movement (the second function of the triceps long head is shoulder extension), lying cable skull crushers definitely provide more consistent resistance and a stronger peak contraction.

So you may want to do both exercises if you're an advanced lifter that can benefit from having plenty of volume in their routine.