Spare your wrists and blast your biceps with EZ bar spider curls. 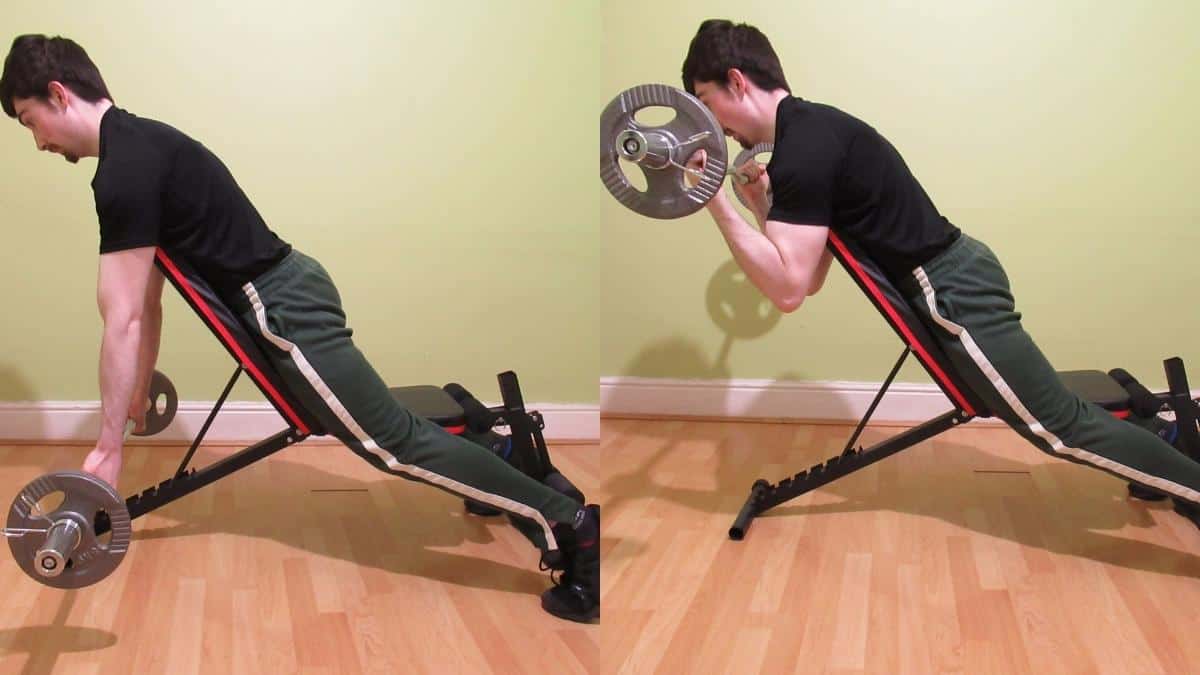 The EZ bar spider curl is a popular exercise for building the bicep muscle as well as the brachialis and brachioradialis. Compared to a dumbbell spider curl, incline EZ bar spider curls provide slightly less bicep isolation; however, they enable you to lift heavier weight and thus overload your biceps with more resistance.

Spider EZ bar curls are a bit of a mixed bag. On the one hand, they provide excellent upper arm stimulation for getting pumped biceps, but on the other side of the coin, doing spider curls with an EZ bar can be surprisingly uncomfortable. You'll see what I mean in just a minute.

Pro: Easy on your wrists

The downside, depending on your point of view, is that, due to this partially-supinated grip, EZ bar curls take some of the tension off your biceps and place it onto your brachialis and brachioradialis instead.

Therefore, if you want to absolutely maximize your bicep isolation, then you should do a one arm spider curl or something similar so that you can fully supinate your arms.

Unlike an EZ bicep drag curl, which is incredibly straightforward to set up—you just grab a bar and lift—EZ bar spider curls can be a bit of a nightmare to execute properly.

The solution, of course, is to just ask someone to pass you the EZ bar. Obviously, this might get awkward if you're asking the same person set after set. But if you're only doing a couple of sets in total (spider EZ bar curls are a great finishing exercise), then most gym-goers won't mind lending you a helping hand.

Earlier I mentioned how the EZ-bar spider curl works the brachialis and brachioradialis as well as the biceps. Well, this obviously means that your biceps are going to receive slightly less stimulation than they would if you were curling with fully supinated palms.

However, thanks to the semi-supinated grip of the EZ bar, you can improve the size of your brachialis, which in turn can actually make your biceps look bigger and wider.

Similarly, the brachioradialis is a crucial muscle that many lifters overlook. But by doing EZ-bar spider curls, you can enhance the appearance of this naturally thick muscle, [1] which will make your arms look more aesthetic from just about every angle.

Whether you do the EZ bar spider curl or the reverse spider curl, there's still a good chance that you're going to run into discomfort because both exercises have you curl with your chest pressed into the backrest of a bench.

This positioning can put a lot of pressure on your sternum—especially if you're lifting heavy poundages. [2] As such, it's best to perform EZ bar spider curls at the end of the workout when you naturally need to lift lighter weights due to the bicep fatigue that you've accumulated over the course of your session.

If you still feel uncomfortable—even after reducing the resistance, then your best bet is to switch out the exercise for something more accessible, such as a cable EZ bar curl.

Since incline EZ bar spider curls are most challenging when your biceps are maximally contracted, they naturally produce a powerful pump, one which can enhance the appearance of your arms while you're training.

To take full advantage of this movement's unique biomechanics, squeeze your biceps for a full second at the top of the rep. This way, you'll be building strength in what's meant to be the hardest part of the exercise.

And guess what that means for your biceps?

Regular exercises that aren't so contraction-focused will feel like a piece of cake. So not only will you build bigger muscles with the spider EZ curl, you'll build stronger biceps too.

Conclusion: Are EZ bar spider curls worth your while?

The spider EZ curl is most definitely a worthwhile exercise if you want to pump up your biceps and make them grow. While the setup is undeniably inconvenient, the trade-off is that you get excellent bicep isolation because it's virtually impossible to swing the weight up when your back and legs are stabilized, thanks to the bench.

Similarly, the EZ bar is very joint-friendly because it places your wrists in a semi-supinated position that takes the strain off your connective tissue. The downside to this is that the tension gets distributed more evenly across your arms as a whole—not just your biceps—because the brachialis and brachioradialis become more involved when your forearms aren't in full supination.